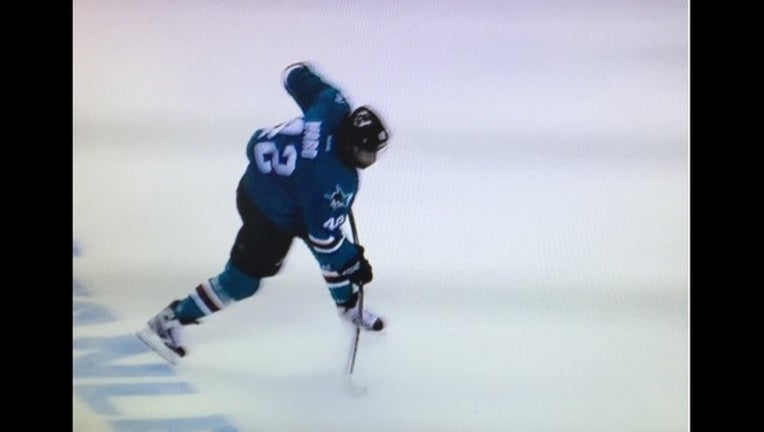 SAN JOSE, Calif. (AP) — The San Jose Sharks defeated the Pittsburgh Penguins during Game 3 of the Stanley Cup Final after an overtime for both teams.

The San Jose Sharks have gone to overtime for the fifth time in the playoffs this year, the second straight game against the Pittsburgh Penguins. They're 0-4 so far, and no NHL team has ever lost five overtime games in one postseason.

Only one time since the league implemented a best-of-seven format for the Stanley Cup Final has a team trailing 3-0 in the series rallied to win. That was 1942 when Toronto came back to beat Detroit.

The Penguins took a 2-0 lead into the night at the SAP Center.

They outshot the Sharks 33-22 through three periods and blocked 36 shot attempts by the home team.

Joel Ward's tying goal put the Sharks in a 2-all tie with the Pittsburgh Penguins in their attempt to avoid falling into an almost-invincible 3-0 series deficit.

With time expiring on a 4-minute power play, Ward led a 3-on-2 rush and ripped a shot that found an opening through goalie Matt Murray to forge a tie at the 8:48 mark of the third period.

The final minutes of regulation were a flurry, but Murray and Sharks goalie Martin Jones were up to the task as shot after shot was blocked by the defensemen in front of them and the series reached an extra period for the second straight game.

Joel Ward has the San Jose Sharks right back in the game — and maybe the series.

With time expiring on a four-minute power play, Ward led a 3-on-2 rush and ripped a shot that found a hole in mighty Penguins goalie Matt Murray's armor. The puck found the back of the net to tie the game at 2 at the 8:48 mark of the third period.

Nick Bonino took a double-minor penalty for high-sticking Joe Thornton at 4:48, giving the Sharks an extended power play — their second of the game and only the fifth of this series.

Murray denied every chance until the very last one, as Ward prompted a deafening roar from the energetic SAP Center crowd.

Ben Lovejoy and the Pittsburgh Penguins are 20 minutes of game time away from taking an almost-invincible lead in the series. They took a 2-1 lead over the Sharks into the second intermission, on the verge of spoiling the first Stanley Cup Final home game in San Jose franchise history.

With 53 seconds remaining in the second period, Lovejoy sent a shot at the net with teammates Conor Sheary and Patric Hornqvist applying a double screen on Sharks goalie Martin Jones with defenseman Brent Burns arriving too late.

The puck was successfully redirected by Hornqvist past Jones for his eighth goal of this postseason. Sheary made the key play by getting the puck deep in the zone for the Penguins, who were outshot 9-6 in the second period.

Pittsburgh's discipline has been an important factor in the way the series has slanted so far.

San Jose went on 66 power plays over the first 20 playoff games, an average of more than three per contest with a 27.3 percent scoring rate, the second-best among the 16 teams in the postseason. But the Sharks skated with a man advantage only three times over the first 2 1/2 games of this series against the Penguins.

Finally, midway through the second period, a tripping penalty on Carl Hagelin put the Sharks on a power play.

The 2 minutes came and went without much of a threat for Penguins goalie Matt Murray, and the 1-1 tie stood into the stretch run before the second intermission.

Pittsburgh's speed survived the cross-country flight and made it all the way to the West Coast intact.

Justin Braun's slick stop and shot kept San Jose in the mix and gave the home team some badly needed momentum at the first intermission.

The Penguins took an early lead, when Ben Lovejoy's long shot from the boards bounced off Sharks defenseman Roman Polak's shin pad and past goalie Martin Jones just 5:29 into the game. The Penguins held a 14-6 shots advantage in the first period, giving them a cumulative 40-16 edge in the first 20 minutes of the first three games of this championship series.

But Braun and the Sharks jumped back into the fray in the franchise's first home game in a Stanley Cup Final.

He stopped a sliding puck with his left skate for a perfect ricochet to his stick before snapping a shot past Penguins goalie Matt Murray, who didn't move until the puck was in the back of the net at the 9:34 mark to tie the game.

Pittsburgh and San Jose are off to a fast start.

Ben Lovejoy's long shot from the boards, a knuckler off the edge of his stick, took a tricky route to the goal and gave the Penguins the lead 5:29 into the game.

Sharks goalie Martin Jones mishandled a puck off to his right side that kept a Pittsburgh attack alive. It wound up with the defenseman Lovejoy, who let it rip for his second goal of this postseason.

The shot glanced off the shin pad of Sharks defenseman Roman Polak before bouncing into the net.

Polak was later credited with San Jose's first shot on goal, more than 8 minutes in. Just moments later, the Sharks forged a tie with a slick shot by Justin Braun.

Braun stopped a sliding puck with his left skate for a perfect ricochet to his stick before snapping a shot past Penguins goalie Matt Murray, who didn't move until the puck was in the back of the net.

The Pittsburgh Penguins and San Jose Sharks are under way in Game 3 of the Stanley Cup Final.

Sidney Crosby snagged the opening faceoff for the Penguins away from Sharks center Logan Couture, with the speedy Penguins taking a 2-0 series lead to the Bay Area. The Sharks took their home ice without first-line forward Tomas Hertl, who was replaced on the wing by Melker Karlsson to stake with Joe Thornton and Joe Pavelski.

Retired NFL star Marshawn Lynch, a proud native of nearby Oakland, excitedly served as the celebrity dressing room door opener for the Sharks as they rushed onto the ice for introductions. The crowd at SAP Center observed a moment of silence in honor of boxing great Muhammad Ali, who died Friday.