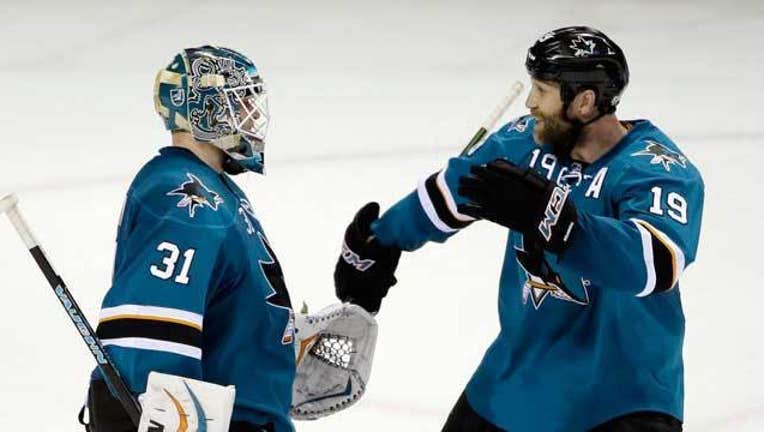 SAN JOSE, Calif. (AP) — Instead of answering the annual questions about what it would take for San Jose finally to break through in the NHL playoffs, the Sharks are spending the start of this postseason facing even bigger questions.

While 16 teams begin preparations for the playoffs, the Sharks have already begun the offseason after missing the postseason for the first time since 2003. They face plenty of uncertainty about the future of coach Todd McLellan and the direction of the franchise.

San Jose had made 10 straight playoff berths for the third-longest streak in the four major North American team sports before taking a major step backward this season when the Sharks finished 12th in the 14-team Western Conference.

San Jose's point total fell from 111 to 89 in just one season, placing McLellan's job in jeopardy. The Sharks have the third-most wins in the NHL since McLellan arrived before the 2008-09 season, but that has not led to postseason success.

San Jose won the Presidents' Trophy as the top regular-season team in 2009 only to fall in the first round to Anaheim. They then made back-to-back trips to the conference finals the next two seasons, but have won one playoff series in McLellan's past four seasons.

"There's going to be review time," McLellan said after the season ended. "Our management group, our ownership group is going to review every aspect of our organization like they do most years and our coaching staff will come under that review. But I have to do my own personal review too."

McLellan said he plans to sit down with his family Tuesday to discuss his future and the team will hold season-ending meetings the following day.

"I'll look at the impact I've had and can have moving forward and we'll go from there," McLellan said.

McLellan has strong support among the players, many of whom have developed into NHL stars under his stewardship in San Jose.

Couture and McLellan spoke following a third straight season-ending loss to the Los Angeles Kings. The circumstances couldn't have been more different following Saturday's game than they were the previous two seasons.

In 2013, the Sharks lost a tense, seven-game, second-round series to the Kings with the home team winning every game. It only got more painful last season when San Jose became just the fourth NHL team to lose a best-of-seven series after winning the first three games.

That sent the Sharks into of offseason of soul-searching in which the leadership and culture of the team was put in question. General manager Doug Wilson talked about the need to take a step backward with a youth movement before being able to reach the ultimate goal of the franchise's first Stanley Cup championship.

Those comments rankled some of the players with star Joe Thornton getting stripped of his captaincy and then disagreeing at the start of training camp with Wilson's assessment that the Sharks were a "tomorrow team."

That tension only grew as the season went on and boiled over when Wilson told season-ticket holders in March that Thornton had a tendency to lash out at people in stressful situations and Thornton responding that his GM should "shut his mouth" and "stop lying."

The two publicly made up shortly after that. But the team never truly rebounded from last season's playoff collapse and now must figure out what needs to be done to turn things around.