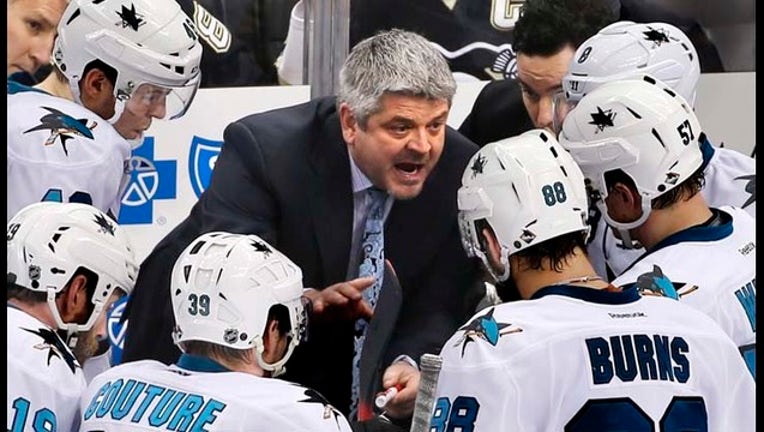 SAN JOSE (AP) -- After seven seasons of great regular-season success and playoff disappointments, coach Todd McLellan and the San Jose Sharks decided it was time for a change.

The Sharks announced Monday that they had agreed to part ways with the winningest coach in franchise history after the team missed the playoffs for the first time since 2003.

With the Sharks committed to a youth movement and McLellan having just one year on his contract, the two sides agreed it was time to make a change.

"This team is clearly in a rebuild," McLellan said. "With one year left, heading forward I had to analyze where everything was going. I felt with some of the answers I got that it was time."

McLellan had a 311-163-66 regular-season record with the Sharks, the third best in the league since he took over before the 2008-09 season. But San Jose finished 12th out of 14 teams in the Western Conference this season and missed the postseason, leading to the change.

"I want to thank Todd and his staff for their years of service to the San Jose Sharks organization," general manager Doug Wilson said in a statement. "Sometimes a change is best for all parties involved but nothing will take away from what Todd and his staff accomplished here over the last seven seasons."

McLellan, who won a Stanley Cup as an assistant in Detroit, got off to a successful start in his tenure in San Jose, winning the Presidents' Trophy as the top regular-season team in 2009. But the Sharks fell in the first round of the playoffs to Anaheim in another postseason disappointment for a franchise full of them.

The Sharks then made back-to-back trips to the conference finals the next two seasons, but won one playoff series in McLellan's final four seasons.

"There were a lot of good things we did here," McLellan said. "We put up like six or seven banners in the building. We're really proud of that."

Last season's loss was the most devastating. San Jose took a 3-0 series lead over rival Los Angeles only to lose the final four games, becoming just the fourth NHL team to blow such a lead.

McLellan questioned after the series whether his message was still getting through to the players. Wilson kept McLellan on for another year to oversee a shift to younger players but the team never truly got over the sting of the playoff loss.

Wilson talked about the need to take a step backward with a youth movement and new leadership before being able to reach the ultimate goal of the franchise's first Stanley Cup championship.

Those comments rankled some of the players. Star Joe Thornton was stripped of his captaincy and then disagreed at the start of training camp with Wilson's assessment that the Sharks were a "tomorrow team."

That tension only grew as the season went on and boiled over when Wilson told season-ticket holders in March that Thornton had a tendency to lash out at people in stressful situations. Thornton responded that his GM should "shut his mouth" and "stop lying." The two publicly made up shortly after that but it wasn't enough to save the season.

Outside of a stretch of nine wins in 10 games between Thanksgiving and Christmas, the Sharks never got on a roll this season. They frequently lost to teams at the bottom of the standings and won just 19 of 41 home games because of struggles in goal, on defense and on the penalty kill.

"I expected to be in the playoffs. It's as simple as that," McLellan said. "I thought we had a group that could get there. Obviously we didn't perform well enough in certain segments in the season and that affected the standings and now we're forced to watch. For me that's the biggest disappointment."

McLellan now heads to Europe to coach Team Canada in the world championship starting next month. But he said he wants to coach in the NHL next season and should have plenty of options with openings in places like Toronto, Edmonton, Philadelphia and Buffalo.

The Sharks also announced that assistants Jim Johnson and Jay Woodcroft, and video coordinator Brett Heimlich have been let go. Associate coach Larry Robinson has moved into his full-time role of director of player development.