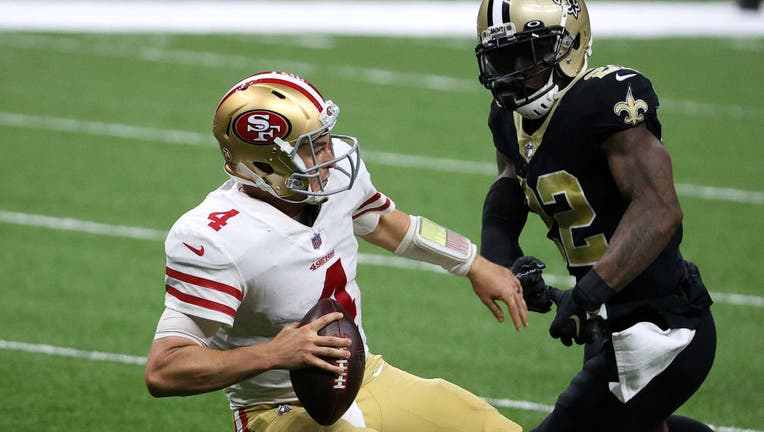 NEW ORLEANS, LOUISIANA - NOVEMBER 15: Nick Mullens #4 of the San Francisco 49ers attempts to avoid being tackled by Chauncey Gardner-Johnson #22 of the New Orleans Saints during their game at Mercedes-Benz Superdome on November 15, 2020 in New Orlean

NEW ORLEANS - An early 10-0 lead was not nearly enough for the mistake-prone, injury-ravaged San Francisco 49ers to hold on against the Saints.

Helping out New Orleans when they needed to be error free, the Niners committed four turnovers and lost their third in a row, 27-13, in what has been a frustrating follow-up to their 2019 Super Bowl run.

“If we had taken care of the ball better today, we would have had a very good chance to be in that game,” coach Kyle Shanahan said. “We blew an opportunity there. Those turnovers are what killed us.”

The 49ers ran 23 plays to the Saints’ three in the first quarter and still led 10-3 when a punt bounced off Ken Webster on one hop while he was standing near returner Trent Taylor. The Saints’ Marquez Calloway fell on the ball at the 49ers 21, setting up a 2-yard, tying touchdown run from Alvin Kamara.

“Trent fair caught it and then let it go,” he said. “He didn’t tell me that he didn’t see it. I think he should have caught it.”

The rest of the day was just as ugly for San Francisco.

Running back Jerick McKinnon was stuffed on fourth-and-1 at the New Orleans 41, leading to Kamara’s 3-yard touchdown catch as the Saints went ahead 17-10 with 1:15 left in the first half. The 49ers managed only 49 yards rushing on 25 attempts.

Nick Mullens, starting again in place of injured Jimmy Garoppolo, threw two second-half interceptions in scoring range. The first came on third down from the Saints 32 when safety Malcolm Jenkins picked off a pass Mullens thought he could get over his head.

“They blitzed and I felt like there was space in the middle,” Mullens said. “I wanted to put it past that guy, but he got up for it and made a good play.”

The last one came with 2:25 left in the game as he tried to hit wide receiver Kendrick Bourne in the end zone, and cornerback Patrick Robinson grabbed the underthrown ball.

“I’m really frustrated with myself,” Mullens said. “I just needed to put it out there for him and let him make a play on it.”

The back-breaking mistake occurred earlier when Richie James muffed a punt with 8:59 left while the 49ers trailed 20-10. Calloway fell on it again, giving the Saints the ball at the San Francisco 22.

“When you’re playing a good team like that, the mistakes are going to be that much more crucial,” Mullens said. “We proved that today. We needed a disciplined, sound game.”

Making matters worse, they felt they did not get any help from the officials when they were up 10-3. Defensive tackle Kentavius Street sacked Drew Brees but was penalized 15 yards for roughing because he drove him into the ground and landed on him.

Instead of having third-and-nearly 20, New Orleans received an automatic first down at the San Francisco 11 and tied the game at 10 three plays later.

“They’ve got to let us play ball,” defensive end Kerry Hyder said. “Street did a great job of falling on the side. It was just one of those calls. You just have to play through it.”

San Francisco, which already was missing a slew of players to injuries, lost running back JaMychal Hasty to a broken collarbone and safety Johnathan Cyprien to a hamstring issue.

Entering their bye week, the 49ers hope to get some players back for their next game on Nov. 29 against the Los Angeles Rams.

“We’ve basically had a revolving door at almost every position,” offensive tackle Trent Williams said. “Every week we are just mustering up to get 11 guys on the field.”