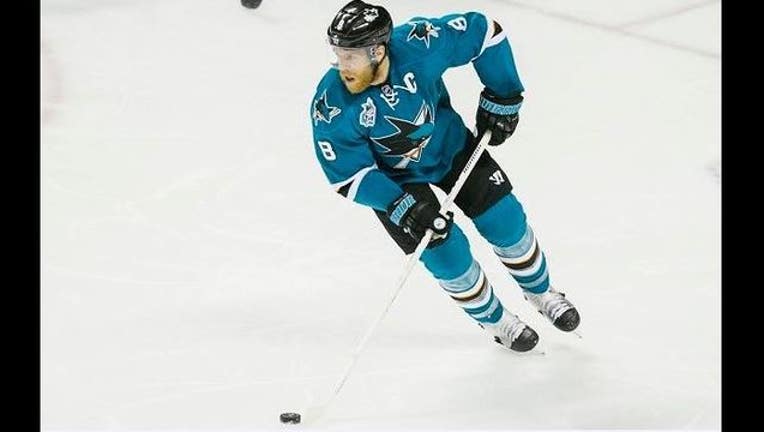 ST. LOUIS (AP) — Joe Pavelski scored two goals, including the go-ahead score in the opening minute of the third period, and the San Jose Sharks beat the St. Louis Blues 6-3 to take a 3-2 lead in the Western Conference final on Monday night.

Joel Ward also scored twice including one of two empty-netters in the final minute for San Jose, which can close it out at home on Wednesday night. The Sharks have never reached the Stanley Cup Final. Joe Thornton had three assists for the Sharks.

Pavelski leads the playoffs with 12 goals and has three two-goal games, one in each series. The Sharks' captain added an assist and is tied with teammate Logan Couture for the postseason points lead, each with a franchise-record 21 points.

Rookie Robby Fabbri scored and David Backes had an assist for St. Louis. Both were questionable coming off injuries in Game 4.

The Sharks were 2 for 3 on the power play in the win.

Troy Brouwer batted in a rebound from midair for St. Louis and Ward also scored a similar goal for San Jose with his first of the game.

Brouwer leads St. Louis with eight goals in 19 games this postseason after totaling seven in his first 78 playoff games.

Pavelski was left alone in the slot on a power play at 18:33 of the second and beat Jake Allen to tie it at 3-3. He redirected Brent Burns' drive from the point 16 seconds into the third to put the Sharks in front to stay.

The Sharks scored first on Marc-Edouard Vlasic's first goal of the postseason from the point at 3:51 of the first period.

Jaden Schwartz snapped a 13-game goal drought to tie it on a rebound at 7:04 of the first.