It wasn’t a masterpiece by any stretch with both teams struggling to score and missing easy layups and shots, but Stanford did just enough to pull off the win. 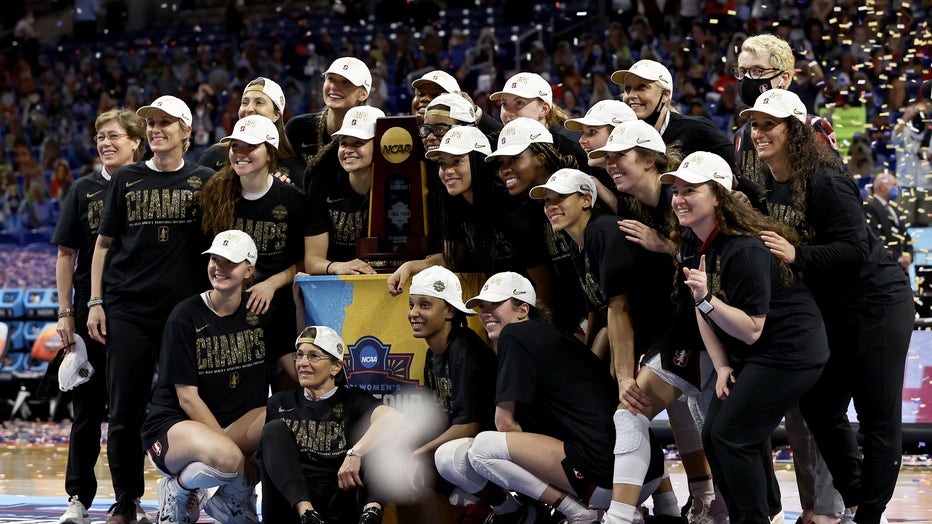 SAN ANTONIO, TEXAS - APRIL 04: Members of the Stanford Cardinals celebrate a win against the Arizona Wildcats in the National Championship game of the 2021 NCAA Women's Basketball Tournament at the Alamodome on April 04, 2021 in San Antonio, Texas. (

After a timeout, Jones answered with a three-point play with 2:24 left. That would be Stanford's last basket of the game. McDonald got the Wildcats with 54-53 with 36.6 seconds left converting three of four free throws. 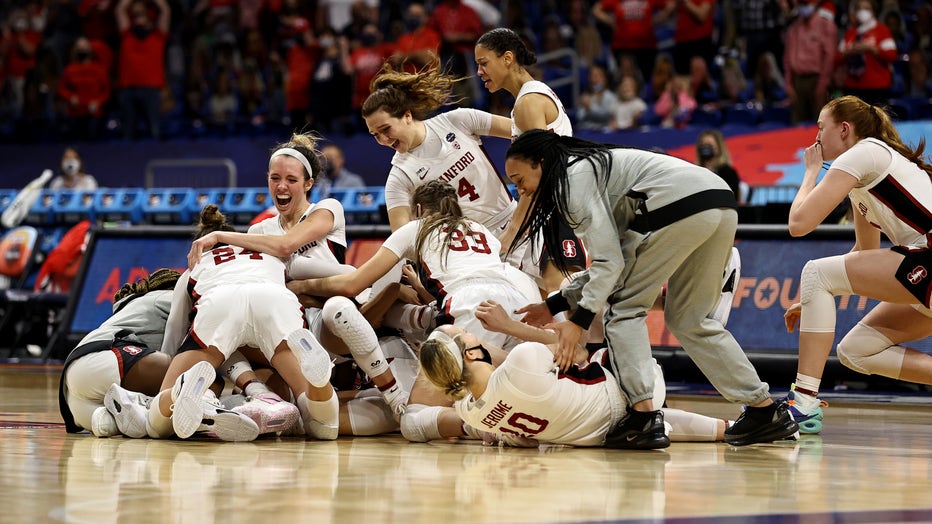 SAN ANTONIO, TEXAS - APRIL 04: Members of the Stanford Cardinals celebrate a win against the Arizona Wildcats in the National Championship game of the 2021 NCAA Women's Basketball Tournament at the Alamodome on April 04, 2021 in San Antonio, Texas. (

The Cardinal, after another timeout couldn't even get a shot off, giving Arizona one last chance with 6.1 seconds left, but McDonald's contested shot from the top of the key at the buzzer bounced off the rim.

After the shot, McDonald fell the floor near midcourt, slumped in disbelief while the Cardinal celebrated. 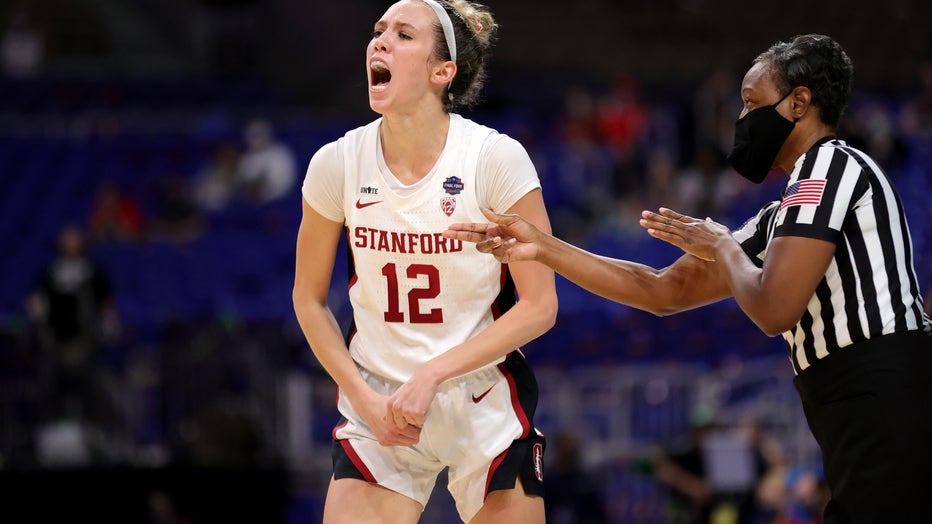 SAN ANTONIO, TEXAS - APRIL 04: Lexie Hull #12 of the Stanford Cardinals reacts against the Arizona Wildcats in the National Championship game of the 2021 NCAA Women's Basketball Tournament at the Alamodome on April 04, 2021 in San Antonio, Texas. (Ph

It's been quite a journey for VanDerveer and the Cardinal this season. The team was forced on the road for nearly 10 weeks because of the coronavirus, spending 86 days in hotels during this nomadic season.

The team didn’t complain and went about their business and now have another NCAA championship. Along the way the Hall of Fame coach earned her 1,099th career victory to pass Pat Summitt for the most all time in women’s basketball history.

Now the 67-year-old coach has a third national title to go along with the ones she won in 1990 and 1992. That moved her into a tie with Baylor's Kim Mulkey for third most all time behind Geno Auriemma and Summitt.

VanDerveer had many great teams between titles, including the ones led by Candice Wiggins and the Ogwumike sisters — Nneka and Chiney, but the Cardinal just couldn't end their season with that elusive win in the title game until Sunday night.

It was the first women’s basketball championship for the Pac-12 since VanDerveer and Stanford won the title in 1992. The last time a team from the conference was in the title game was 2010 when the Cardinal lost to UConn. That game was also played in the Alamodome — the site of every game in this tournament from the Sweet 16 through Sunday’s championship game.

The entire NCAA Tournament was played in the San Antonio area because of the COVID-19 pandemic.

While Stanford had history on its side, Arizona has been building under coach Adia Barnes, who was the fourth Black woman to lead her team to the championship game, joining Carolyn Peck, Dawn Staley and C. Vivian Stringer. Peck and Staley won titles.

Barnes starred for the Wildcats as a player in the late 90s and came back to her alma mater five years ago. She guided the team to the WNIT title in 2018 and led them to their first NCAA title game ever. This was the team's first appearance in the NCAA Tournament since 2005 — although the Wildcats would have made the NCAAs last season had it not been canceled by the coronavirus.

The Wildcats started the season No. 7 in the poll and moved up to as high as sixth — the best ranking ever in school history —for a few weeks.

McDonald, who followed her coach from Washington as a transfer, has been a huge reason for the team's success. The 5-foot-6 guard, who is lightning quick, is one of the rare two-way players in the game who can make an impact on both ends of the court.

She struggled against the Cardinal, finishing with 22 points while going 5-for-20 from the field.

McDonald got the Wildcats on the board hitting a 3-pointer, but then Stanford scored the next 12 points. The Cardinal led 16-8 after one quarter.

Arizona got going in the second quarter and took a 21-20 lead before Stanford scored 11 straight points, highlighted by Lexie Hull's four-point play. The Cardinal led 31-24 at the half. McDonald missed nine of her 11 shots in the first half.

The Wildcats were trying to be only the fourth team to trail by double digits and win a championship.

These teams met twice during the regular season and Stanford rolled past Arizona both times, winning by double digits in each game.

Sunday night’s game was the first with two teams from west of the Mississippi playing for a title since 1986. ... Notre Dame had the biggest comeback of any team in the NCAA title game rallying from 15 down to win the 2018 title on a last-second shot by Arike Ogunbowale.

Barnes has beaten VanDerveer just twice in her career as both a player and coach at Arizona. She lost seven of eight playing for the Wildcats in the late 90s. The lone victory came in her senior year on a last-second shot off a pass from Barnes to teammate Reshea Bristol, who hit a 20-footer for the win in 1998. As a coach she had lost 10 of the 11 previous matchups before Sunday with the only victory coming in overtime on Feb. 28, 2020.