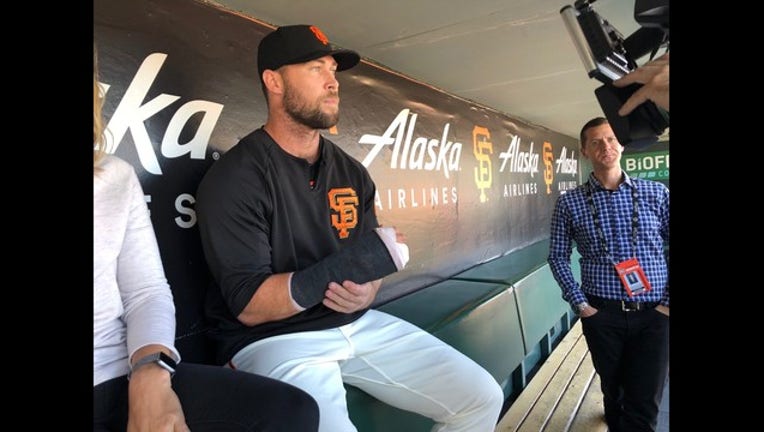 SAN FRANCISCO (AP) - Giants closer Hunter Strickland broke his pitching hand punching a door in frustration after blowing the save and taking the loss in a 5-4 defeat to the Miami Marlins on Monday night.

The right-hander had surgery Tuesday and expected to be out six to eight weeks, manager Bruce Bochy said. An X-ray after the game revealed the break of Strickland's pinkie, similar to what sidelined lefty ace Madison Bumgarner to begin the season after he was hurt in his final spring training start.

"I'm thoroughly disappointed, trust me. I'm crushed because this guy had just grown as a pitcher and a player and a person," Bochy said. "But I know Hunter, he cares. He cares deeply. He let his emotions get away ... he had a temporary snap."

Strickland blew his fourth save in 17 chances and second straight, allowing more than two runs for only the fourth time in his career.

"Life has an interesting and sometimes disappointing way of opening up our eyes," Strickland wrote. "Words cannot describe the amount of regret and sorrow I have for my actions. I have let down the ones that care and mean the most, as well as the ones that count on me day in and day out. To my family, my teammates, my coaches, this organization, and our fan base, I am truly sorry that one split second, stupid decision has caused so much harm and now set me back from being out there with my team to pursue our goal."

Bochy said Strickland had shown maturity and made progress keeping his emotions in check since last year's fight with Nationals star Bryce Harper.

In late May last year, Strickland ignited an all-out brawl when he beaned Harper with a 98 mph fastball on his first pitch in the eighth inning with two outs, none on and Washington ahead 2-0. Harper charged the mound and both men threw punches as benches and bullpens emptied.

"As he became our closer he really grew as a pitcher handling his emotions well in tight situations, which you have to. You have to be able to control your emotions," Bochy said. "I've talked about this so much, how important it is for players but particularly the closer's got to have emotional control. We all get frustrated and that was a tough loss, a gut-wrenching loss which I'm sure he felt full responsibility for it and he just didn't think before he acted."

Sam Dyson and Tony Watson will be called upon for closing duties, with one getting most of the opportunities though Bochy didn't reveal which one that would be. The manager doesn't consider Mark Melancon - signed to a $62 million, four-year deal before last season to work the ninth - ready for the role after a series of injuries.

"Your closer is somebody who has to be resilient and I'm not sure that Mark's at that stage right now," Bochy said.

Right-hander Pierce Johnson was on his way from Triple-A Sacramento to take Strickland's roster spot.