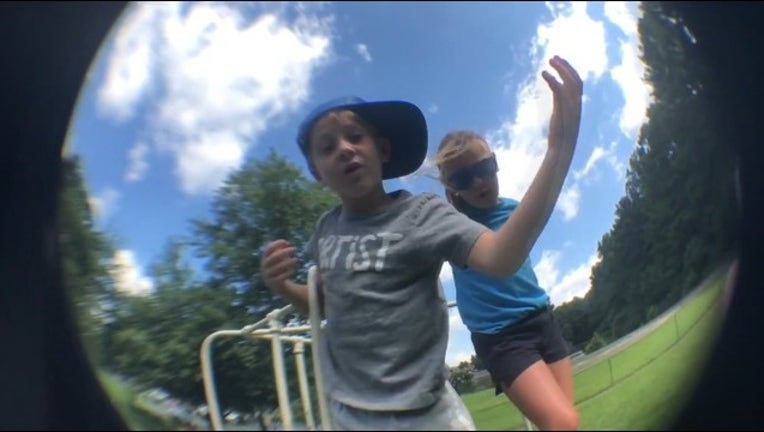 Lucas and Juliet Mount made a song about trick-shots that's been streamed more than half a million times. They're this week's talent on That Kid's Got Game.

(KTVU) - An eight-year-old boy likes trick-shots so much he and his sister made a song about them. Literally. And it’s been streamed more than half-a-million times.

Like many others, Lucas Mount got into trick-shots after imitating big YouTube names like Dude Perfect and That’s Amazing. He records the creative videos with his nine-year-old sister Juliet. Their father, who is an Atlanta music producer, suggested they write a song about it.

And then “The Bottle Flip Song” expanded to a music video. It’s since been streamed on Spotify over 500,000 times, viewed on Facebook over 20,000 times and watched on YouTube more than 5,000 times, making Lucas and Julie the first recording artists to be featured on That Kid’s Got Game.

Those figures and platforms are recognizable to most, especially the younger generations. But eight-year-old Lucas wasn’t as familiar with the air time his father Kenneth Mount was excited about. Mount got word that the song would be played on Star 94, a top 40 station in Atlanta.

Mount added that this was a family project through and through. They wrote, produced and recorded the song themselves before shooting the video on Mount’s iPhone. And since it was so well-received, they kept recording songs and now have a second track called “Paper Airplane Song” with over 500,000 streams on Spotify.

Mount said Lucas and Juliet are currently working on a new song called “Trickshot” and another bottle flipping song. The music video will reportedly have some bigger YouTube names in it, though Mount couldn’t say who.

“We plan to keep on [making songs] as long as everyone is having fun doing it,” Mount said.