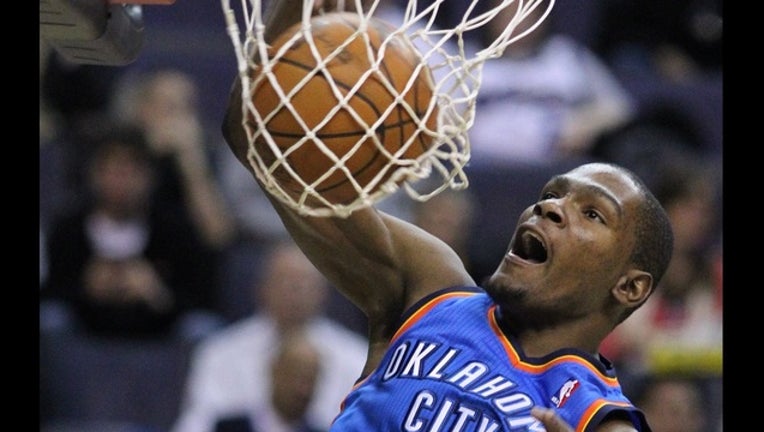 Durant, a four-time NBA scoring champion and the 2014 MVP, will become a free agent on July 1, and he has not made it clear whether he will stay. Presti said he's looking forward to Durant's decision.

"We have the opportunity to sit down with him and talk about what looks like an incredibly bright future together," Presti said Monday. "I think you have to embrace that. You have to really lean into that in an excited way without knowing what the outcome might be. But I don't see any reason to shy away from that."

Players such as Boston's Isaiah Thomas and Philadelphia's Joel Embiid have tweeted their desire for Durant to join them. Presti won't be among those making a sales pitch — he figures all the necessary advertising on his end has occurred during Durant's impressive run with the franchise. The team has reached the Western Conference finals four of the past six years, including this season, and reached the NBA Finals in 2012.

"When those conversations occur, it's really just a continuation of a dialogue that's been going on for eight or nine years," Presti said. "It's a chance to reflect and recognize that relationship and continue the conversations that we've had on going."

Social media has been going crazy over the possibilities, but the cerebral Presti is calm, as usual.

"We can't make that decision come faster or slow it down, so we may as well enjoy the season we just had and allow him to do the same," Presti said. "And then when it's time, we'll sit down and have that conversation with him, and at that point we'll know where we stand."

Presti said ideally, Durant would decide quickly because it helps with other roster decisions, but the superstar has earned the right to be patient.

"I think it really is important for him to take his time, get away from things," Presti said. "Look, Kevin is a highly, highly intelligent person. He's a mature person. He's a rational person, and he's going to work through the decision in a way that will help him do what he feels is best for him. We'll react accordingly once we have that information, and we'll try to be as prepared as possible."

Durant recovered from a broken bone in his right foot that cost him much of last season to post one of the best years of his career. He averaged 28.2 points per game — more than when he was scoring champion in 2010-11 and 2011-12. He grabbed a career-high 8.2 rebounds per game, and added 5.0 assists per contest, the second-best total of his nine-year career.

"I thought the season he had was just remarkable," Presti said. "I'm just really happy for him because I thought he had a lot of fun during the year, and I watched him this time last year in a pool. I remember when he started to just start walking — like it was celebratory — to go from that to having maybe his most efficient year."

Presti said Durant helped the Thunder by focusing on this season rather than the next.

"I also think Kevin deserves a tremendous amount of credit for the way he's handled his affairs, because what it really did was it allowed our team to focus on the season and really made the season we had possible," Presti said.