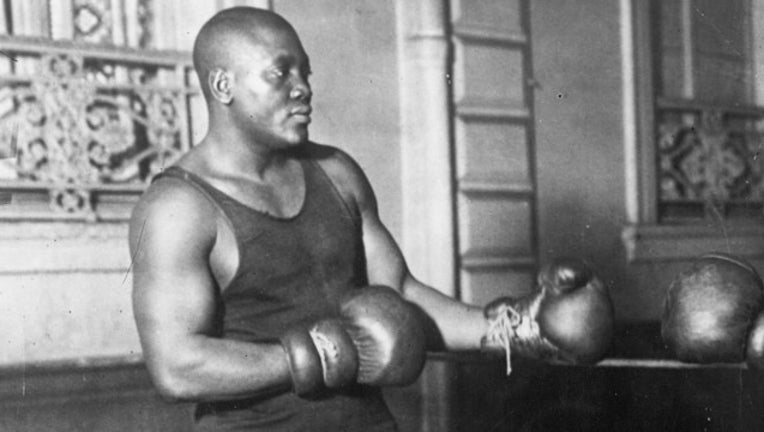 Trump announced Saturday on Twitter that the actor Sylvester Stallone, a friend of his, had called to bring Johnson's story to his attention.

"His trials and tribulations were great, his life complex and controversial," Trump wrote from his Mar-a-Lago club in Florida. "Others have looked at this over the years, most thought it would be done, but yes, I am considering a Full Pardon!"

Johnson is a legendary figure in boxing and crossed over into popular culture decades ago with biographies, dramas and documentaries following the civil rights era.

Most famously, his story was fictionalized for the play "The Great White Hope," starring James Earl Jones, which won the Pulitzer Prize for drama and the Tony Award for best play in 1969. A film version with Jones was released in 1970. More recently, the documentary "Unforgivable Blackness: The Rise and Fall of Jack Johnson," directed by Ken Burns, was aired on PBS in 2004.

Johnson was convicted in 1913 for violating the Mann Act, which made it illegal to transport women across state lines for "immoral" purposes.

The boxer died in 1946. His great-great niece has pressed Trump for a posthumous pardon, and Sen. John McCain, R-Ariz., and former Senate Majority Leader Harry Reid, D-Nev., have been pushing Johnson's case for years.

The tweet came a week after Trump pardoned I. Lewis "Scooter" Libby, who had been a top aide to Vice President Dick Cheney, arguing that Libby had been "treated unfairly" by a special counsel.

Stallone, who starred in the 1976 boxing film "Rocky" and several sequels, is a supporter of the president and attended Trump's New Years' Eve party at Mar-a-Lago in 2016.

McCain previously told The Associated Press that Johnson "was a boxing legend and pioneer whose career and reputation were ruined by a racially charged conviction more than a century ago."

"Johnson's imprisonment forced him into the shadows of bigotry and prejudice, and continues to stand as a stain on our national honor," McCain said earlier this month.

In Jim Crow America, Johnson was one of the most despised African-American of his generation, humiliating white fighters and flaunting his affection for white women.

The son of former slaves, he defeated Tommy Burns for the heavyweight title in 1908 at a time when blacks and whites rarely entered the same ring. He then mowed down a series of "great white hopes," culminating in 1910 with the undefeated former champion, James J. Jeffries.

"He is one of the craftiest, cunningest boxers that ever stepped into the ring," said the legendary boxer John L. Sullivan, in the aftermath of what was called "the fight of the century."

But Johnson also refused to adhere to societal norms, living lavishly and brazenly and dating outside of his race in a time when whites often killed African-Americans without fear of legal repercussions.

After seven years as a fugitive following his conviction, Johnson eventually returned to the U.S. and turned himself in. He served about a year in federal prison and was released in 1921. He died in 1946 in an auto crash.

The stain on Johnson's reputation forced some family members to live in shame of his legacy.

The family "didn't talk about it because they were ashamed of him, that he went to prison," Linda E. Haywood, 61, has said of her great-great uncle. "They were led to believe that he did something wrong. They were so ashamed after being so proud of him."

Haywood said she didn't find out she was related to Johnson until she was 12. She remembers learning about Johnson when she was in sixth grade during Black History Month, and only learned later that he was kin.

Once, she recalled, she asked her mother about Johnson.

Haywood has pressed to have Johnson pardoned since President George W. Bush was in office, a decade ago.

Posthumous pardons are rare, but not unprecedented. President Bill Clinton pardoned Henry O. Flipper, the first African-American officer to lead the Buffalo Soldiers of the 10th Cavalry Regiment during the Civil War; he was framed for embezzlement. Bush pardoned Charles Winters in 2008, an American volunteer in the Arab-Israeli War convicted of violating the U.S. Neutrality Acts in 1949.

Haywood wanted Barack Obama, the nation's first black president, to pardon Johnson, but Justice Department policy says "processing posthumous pardon petitions is grounded in the belief that the time of the officials involved in the clemency process is better spent on the pardon and commutation requests of living persons."

The Justice Department makes decisions on potential pardons through an application process and typically makes recommendations to the president. The general DOJ policy is to not accept applications for posthumous pardons for federal convictions, according to the department's website.

But Trump has shown a willingness to work around the DOJ process.