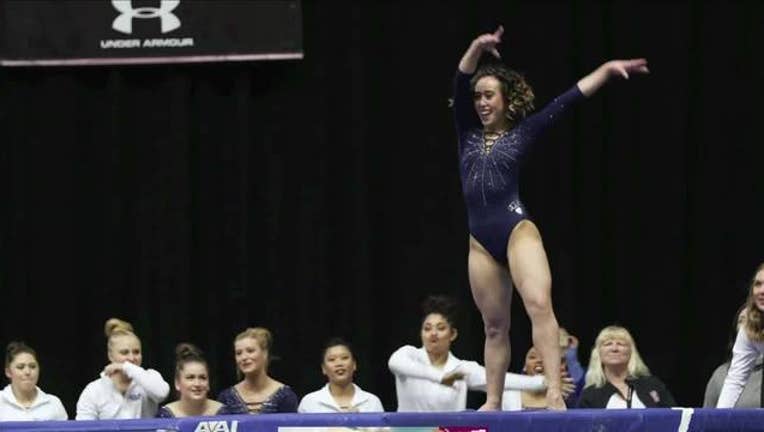 ANAHEIM, Calif. (KTVU) - Her routine is being called "breathtaking," "show stopping," and "poetry in motion." UCLA gymnast Katelyn Ohashi is breaking the internet with the now viral floor routine she performed during a competition on Saturday, which earned her a perfect 10.

Ohashi shined as she took to the floor performing gravity defying flips and graceful tumbles, mixed in with electrifying, high energy dance moves at the Collegiate Challenge at the Anaheim Convention Center.

With an instrumental medley featuring classics including Tina Turner’s "Proud Mary" and “ABC," by The Jackson 5, Ohashi's routine thoroughly energized the crowd and had her teammates rocking along with her during the performance.

Her fellow UCLA gymnasts roared with celebration after the flawless routine and threw up their hands for high-fives all around. The stunning performance helped lead No. 2 Bruins to a first-place finish.

"A 10 isn't enough for this floor routine by @katelyn_ohashi," UCLA Gymnastics tweeted on Saturday along with video of Ohashi's routine.

Many were moved by the joy the 21-year-old gymnast illuminated throughout her routine, as her facial expressions were as mesmerizing as her moves themselves.

"Not only was it perfect looking, her joy is absolutely contagious," wrote Twitter user, @agingernole.

Sen. Kamala Harris, D-Calif. is among the tens of thousands of people who have retweeted the video as she delivered words of congratulations on Sunday.

As of Monday afternoon, the video had been viewed more than 22 million times with many describing Ohashi's program as the best floor routine they've ever seen.