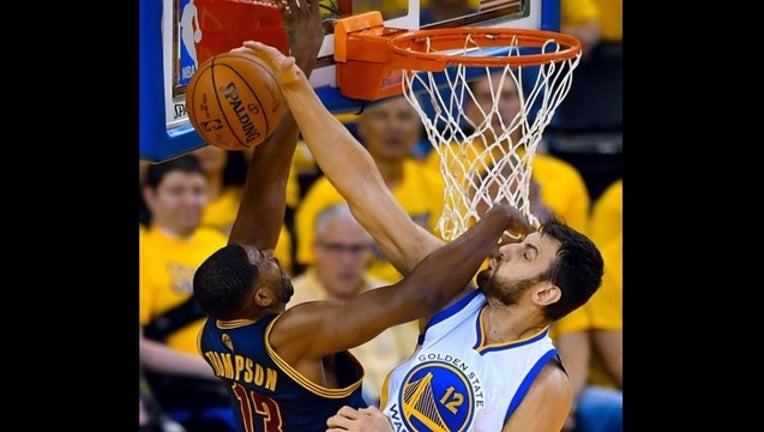 The Warriors take on the Cavs during Game 2 of the NBA Finals on June 5, 2016. (Courtesy: Golden State Warriors)

OAKLAND, Calif. (AP) — The Latest on Game 2 of the NBA Finals between the Golden State Warriors and the Cleveland Cavaliers (all times local):

Draymond Green scored 28 points, Stephen Curry added 18 and the Golden State Warriors ran away in the second half to beat the Cleveland Cavaliers 110-77 in Game 2 of the NBA Finals on Sunday night.

Klay Thompson added 17 for the Warriors, who led by eight at the half before turning it into a blowout. The Warriors lead the series 2-0. Of the previous 31 teams to lead the title series 2-0, 28 went on to win the title.

Cleveland lost Kevin Love in the third quarter to a concussion, putting his status for Game 3 on Wednesday in Cleveland in serious doubt. LeBron James had a team-best 19 points for the Cavaliers, who have now lost seven consecutive games to the Warriors.

It's the first time James has ever lost seven straight to the same opponent.

Cleveland is in trouble.

Starting forward Kevin Love remains away from the bench after taking himself out of the game early in the third quarter, and the Cavaliers are hurting on the floor as well. Golden State leads 82-62 going into the final 12 minutes of Game 2, looking for a 2-0 edge in the NBA Finals.

Of the 31 teams who have won the first two games of The Finals, 28 have gone on to win the championship.

Draymond Green is carrying Golden State, with 28 points — his best-scoring game ever in The Finals. Klay Thompson has 17 points and Stephen Curry has 15 despite missing much of the third quarter with foul trouble for the Warriors.

A little drama is unfolding at Oracle Arena.

Cleveland's Kevin Love took himself out of the game early in the third quarter and went to the locker room, and Golden State's Stephen Curry just picked up his fourth foul with 8:42 left in the quarter.

Love was knocked woozy by an inadvertent elbow from Warriors forward Harrison Barnes with just over five minutes to play in the second quarter. Love lay on the court for several minutes, grabbing the back of his head. Draymond Green scored over him, but after a timeout Love was able to remain in the game.

Golden State has extended its lead to 69-53 in the third.

Down by six at one point in the second quarter, Golden State went on a 30-9 run and wound up taking a 52-44 lead over the Cleveland Cavaliers at halftime of Game 2 of the NBA Finals on Sunday night.

The Cavaliers were down by 15 before scoring the final seven points of the half — all after Stephen Curry picked up his third foul.

Draymond Green has 18 points and Curry has 12 for the Warriors. LeBron James has been his usual spectacular self for the Cavaliers, with 14 points, six rebounds, seven assists and four steals in the first half.

J.R. Smith and Kyrie Irving are shooting a combined 3 for 13 for the Cavs.

Draymond Green said he would be better from 3-point range in Game 2 of the NBA Finals.

Green has connected on three of his first four tries from beyond the arc, with 18 points in the first 19 minutes of Sunday night's game. He's helped stake the Warriors to a 42-30 lead, after they were down by six early in the second quarter.

Not an offensive showcase so far in Game 2 of the NBA Finals, with Cleveland leading Golden State 21-19 after the first quarter.

Tristan Thompson has eight points so far for the Cavaliers, who won the quarter despite shooting 32 percent. Golden State shot 39 percent, but turned the ball over six times.

LeBron James missed all five of his shots in the quarter. Andrew Bogut had four blocks in the game's first 7:20 for the Warriors.

And it's another slow start for Stephen Curry and Klay Thompson. The "Splash Brothers" had five points in the period, all from Curry — and they shot a combined 2 for 7.

Curry did, perhaps surprisingly, grab a game-best six rebounds in the quarter.

Klay Thompson and Stephen Curry haven't got completely on track. But Andrew Bogut has. The Warriors center walked off the court to a standing ovation with his first rest of the quarter, and deservedly so.

The Cavaliers are crashing the rim hard, but Bogut has been right there to turn them back each time, including an emphatic swat of James and the Warriors have an early lead.

LeBron James continues to add records to his playoff resume.

The King played in his 194th postseason game, passing Karl Malone and Danny Ainge (193 each) for 10th place on the all-time list.

But what's on James' mind right now is getting a win in Game 2.

The NBA held a moment of silence before Game 2 to pay homage to Muhammad Ali, who died on Friday. A photo montage was played as well just before the national anthem.

When the moment was finished, Cavs star LeBron James pointed his finger toward the sky and then tapped his heart in tribute to "The Greatest."

There were other signs of respect throughout Oracle Arena.

Shaquille O'Neal and Grant Hill, analysts for NBATV during the series, wore black t-shirts over their dress shirts with "GOAT" — Greatest Of All Time — written across the chest during the pregame broadcast.

Stephen Curry has completed his pregame warmup routine before Sunday night's Game 2 of the NBA Finals, and it ended without sinking one of his heaves from the tunnel area.

Earlier in the series Curry said he hasn't kept track of how he or the team does on nights where he hits one of his five tries from the tunnel versus nights when he misses. Here's a hint: they usually win either way.

"I don't know the study of what my win-loss percentage is based on if I make it or not, but there is a little bit of me that's like, dang, I missed it," Curry said before Game 1. He didn't shoot well in that game, but the Warriors got the victory.

Golden State Warriors coach Steve Kerr expects Stephen Curry and Klay Thompson to get back to their sharpshooting forms in Game 2. The Splash Brothers combined for just 20 points in Golden State's Game 1 victory.

"They're great players," Kerr said. "They will probably shoot a lot better than Game 1, but you never know."

Kerr says the focus is not on shooting, but instead on defending and taking care of the ball. As for the 8 for 27 combined showing by Curry and Thompson, Kerr was asked if he liked the shots the backcourt took in Game 1.

"Those guys are allowed to take any shot they want," the coach said.

The Warriors enter Game 2 of the NBA Finals against Cleveland with 49 home wins and 86 wins overall this season, factoring in regular season and playoffs.

That puts Golden State one shy of matching the 1995-96 Chicago Bulls' full-season record of 87 wins. The Warriors toppled their regular-season mark of 72 wins this year, going 73-9.

Having said that, Golden State could stand alone in one respect: The Warriors would be the first team to win 50 games in one arena in a season. Those Celtics teams that won 50 games at "home" played three games in each of those seasons at Hartford, Connecticut, going 5-1 in those contests.