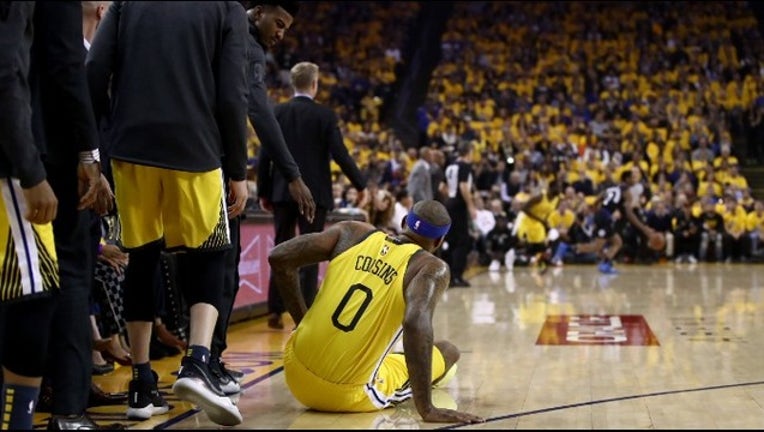 DeMarcus Cousins falls to the crowd after injuring himself against the LA Clippers during Game Two of the first round of the 2019 NBA Western Conference Playoffs at OracleArena on April 15, 2019 in Oakland, Calif. (Photo by Ezra Shaw/Getty Images)

Coach Steve Kerr has named Andrew Bogut as his starter in place of Cousins for Game 3 Thursday night of the team's first-round playoff series against the Clippers in Los Angeles.

Playing in just his second career postseason game after a nine-year wait, the 28-year-old Cousins went down in the first quarter of a 135-131 Game 2 loss Monday night. He fell in front of the Golden State bench after swiping a ball from Patrick Beverley in the back court. Cousins immediately grabbed at his left quad then hobbled to the locker room at the 8:09 mark.

The tear was revealed by an MRI exam Tuesday. The big man returned in January from a nearly yearlong absence while recovering from surgery for a torn left Achilles tendon.

"More than anything, I'm just crushed for DeMarcus," Kerr said Wednesday. "He's been waiting his whole career for this and the second game he goes down after putting all that work in to recover from the Achilles. He's had a great season for us."

For now, Cousins "needs to be comfortable," said Kerr, so there isn't a plan for how much he might be around the team for the remainder of the postseason.

Teammates Kevin Durant and Draymond Green wanted to respect Cousins' space but planned to reach out.

"Just definitely thinking about him. I know for a fact with how much medicine is so good and doctors and all that stuff is so good, I'm sure he'll be back fine, be back to 100 percent after his rehab, so I'm looking forward to that," Durant said.

Bogut will step in to start for the two-time defending champions, a familiar face who re-signed last month for a second stint with the franchise after playing for the 2015 champions. He also played on the '16 team that won 73 games before losing to LeBron James and the Cavaliers in Game 7 of the finals.

"This is why we got him, just in case," Kerr said.

Kevon Looney will also see increased minutes. He scored a career-high 19 points on 6-for-6 shooting in Game 1 while filling in for Cousins.