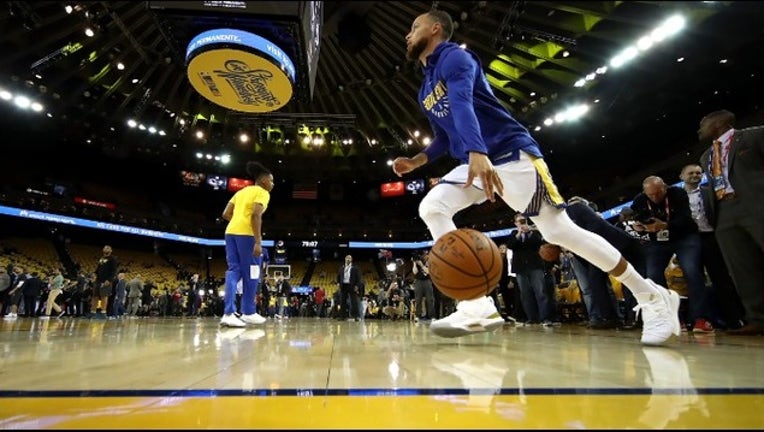 A file photo shows Steph Curry warming up prior to Game 1 of the 2018 NBA Finals against the Cleveland Cavaliers at Oracle Arena on May 31, 2018 in Oakland, California. (Photo by Ezra Shaw/Getty Images)

OAKLAND, Calif. (BCN) - The Golden State Warriors will play their final regular season game at Oracle Arena in Oakland on Sunday afternoon before the big move to the Chase Center in San Francisco next season.

Currently in first place in the Western Conference, the Warriors will host the L.A. Clippers at 5:30 p.m.  Gates open at 3:30 p.m. for pre-game festivities.

The team has called Oracle Arena home since 1971, but is ready to move back across the bay to San Francisco, it's first home, with the soon-to-be-opened Chase Center in The City's Mission Bay neighborhood.

Several of the team's former players will be making appearances at the game, including Rick Barry, Chris Mullin, Jason Richardson, Marreese Speights and Eric 'Sleepy' Floyd. A ticket configuration will also be available for fans to take home a commemorative printout photo ticket.

The Oakland Symphony will perform the National Anthem and will also participate in a halftime ceremony.

With a two-game lead on the Denver Nuggets, the Warriors can clinch the No. 1 seed in the Western Conference with a victory and if the Nuggets lose against the Portland TrailBlazers Sunday night.

The Oakland-based arena hosted opened its doors in 1966, and became the team's fulltime home in 1971, team officials said. It was renovated in 1996.