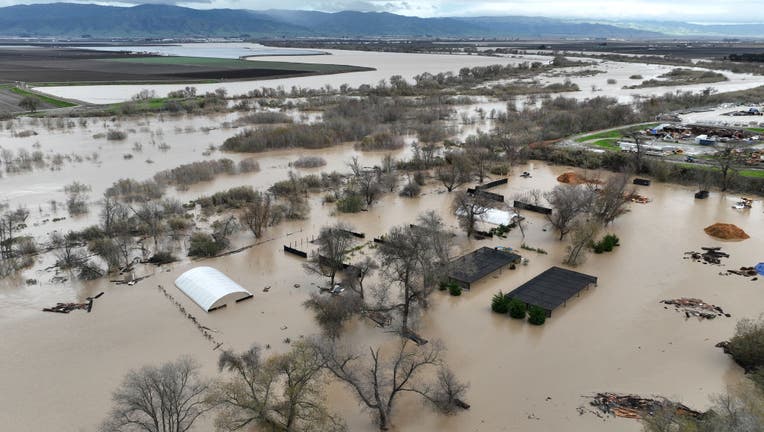 SALINAS, CALIFORNIA - JANUARY 13: In an aerial view, floodwaters cover an agricultural area after the Salinas River overflowed its banks on January 13, 2023 in Salinas, California. Several atmospheric river events continue to pound California with re

SAN FRANCISCO, Calif., - With rain-soaked California expected to see more stormy weather over the weekend and into next week, Gov. Gavin Newsom, and other state and federal officials pleaded with residents Friday to stay alert to possibly more flooding and damage.

A series of storms has walloped the state since late December, leaving at least 19 people dead. On Friday, 6,000 people were under evacuation orders and another 20,000 households were without power, said Nancy Ward, the director of the California Governor’s Office of Emergency Services.

Homes have flooded, levees breached and topped, and mudslides and hurricane-force winds have slammed parts of the state, including a tornado touchdown in Northern California, she said at a press briefing with Deanne Criswell, administrator of the Federal Emergency Management Agency, who was in California to tour damage.

"People will become complacent, but the ground is saturated. It is extremely, extremely dangerous," Ward said. "And that water can continue to rise well after the storms have passed."

The ongoing atmospheric river pattern brought showers to Northern California early Friday, and additional surges of moisture, which will be even stronger, are expected to again spread rain and snow elsewhere in the state over the coming days.

In the last 18 days, a state plagued by drought has averaged more than nine inches (23 centimeters) of rainfall a day — a remarkable amount that has seen some locations meet their average annual rainfall already, said David Lawrence, meteorologist with the National Weather Service.

A Saturday storm will bring widespread, powerful rainfall and heavy mountain snowfall — with wind gusts of up to 60 mph (97 kph) and the possibility of more trees falling and power outages, he said.

There have been at least 19 storm-related deaths, and half of those have involved motorists, with some of the deaths preventable if drivers had heeded road closure signs, said Sean Duryee, acting commissioner of the California Highway Patrol.

On Friday, Newsom visited the upscale community of Montecito in Santa Barbara County — which had been evacuated earlier in the week — on the fifth year anniversary of the mudslide that killed 23 people and destroyed more than 100 homes in the coastal enclave.

He thanked members of the California National Guard for clearing debris out of a catch basin that was constructed after the mudslide in order to divert rain. He also asked residents to exercise caution, and to heed warnings from public safety and law enforcement.

"I know how fatigued you all are," Newsom said. "Just maintain a little more vigilance over the course of the next weekend."

On Monday, President Joe Biden issued an emergency declaration to support storm response and relief efforts in more than a dozen counties, but Newsom is still waiting on the White House to declare a major disaster declaration that would provide more resources.

Flood warnings were in effect for the Salinas River in an agricultural valley about 90 miles south of San Francisco. At least 20,000 acres (8,094 hectares) of farmland were at risk of flooding, the National Weather Service said.

In some parts of Northern California, cars were submerged, trees uprooted and roofs blown off homes.

East of Los Angeles, Santa Anita Park proactively cancelled Saturday’s horse-racing event, an eight-race card, due to the rain forecast. Those races will be run as extras on three subsequent days, the track said.

Damage assessments, which have already started, are expected to surpass $1 billion.