LOS ANGELES - A rare cosmic spectacle is likely to occur on Thursday night if the alpha Monocerotid meteor shower turns into a meteor storm like astronomers are predicting.

Stargazers may be able to see several meteors per minute during the peak in areas where the weather is clear and skies are dark, and the shower radiant — or the position in the sky from which meteors appear to originate — is well above the horizon.

Two prominent scientists, Esko Lyytinen and Peter Jenniskens, along with the SETI Institute, say the chances of a meteor storm occurring are pretty high, but warn that the ephemeral experience will be quick.

The alpha Monocerotid meteor shower is not visible most years, but when it does create an outburst, it only lasts for between 15 and 40 minutes.

If an outburst does occur, Lyytinen and Jenniskens say that it will be in the last hours of the night, beginning at about 4:50 a.m. UT on the morning of Nov. 22. For those hoping to catch a glimpse of the action in the U.S., that equates to 11:50 p.m. EST on the evening of Nov. 21.

A potential outburst will be most visible in western Europe or northwestern Africa, but those in North America and the Atlantic region will also be able to view a possible display. At the time of the predicted outburst, the radiant will be close to the horizon for stargazers on the west coast of North America. 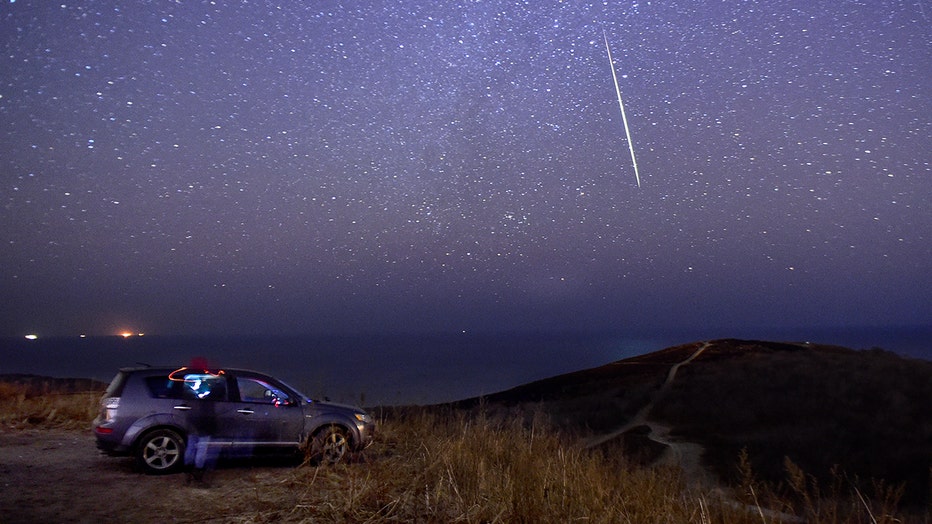 Stargazers watch a meteor streak across the sky over Russky Island off Vladivostok, Russia. Astronomers are predicting a rare outburst of meteors from the alpha Monocerotid meteor shower Thursday night. (Yuri SmityukTASS via Getty Images)

The alpha Monocerotids are best known for four previous outbursts, in 1925, 1935, 1985 and 1995. Out of the four, the 1995 outburst was the only instance that was predictable, which allowed astronomers to make photographic observations that revealed the exact radiant of the shower.

Scientists determined that the radiant for the alpha Monocerotid meteor shower lies within the borders of the constellation Canis Minor, which is near the bright star Procyon.Meteors are created when fragments break off of comets or asteroids. As comets pass by the sun, they emit dust which slowly spreads out to create a wide trail around their orbits, which the Earth then passes through each year. As the Earth flies through these debris trails, small pieces collide with the Earth’s atmosphere and disintegrate, causing bright streaks in the sky which can be seen from Earth’s surface.

The alpha Monocerotid outburst is caused by the dust released by a long period comet, but the comet itself is still unknown.

Those wishing to witness the potential outburst should look to the night skies about an hour before peak activity is predicted.

Bill Cooke from the NASA Meteoroid Environment Office published a blog post warning that he doesn't feel as certain and Lyytinen and Jenniskens that an outburst will occur.

"If Jenniskens and Lyytinen are right, you might see some pieces of a comet that awaits discovery, burning up in the atmosphere 60 miles above your head," Cooke wrote.

"That’s worth a couple of hours, I think," he added. "Even if there is no outburst, it doesn’t hurt to get out under the stars for a bit."