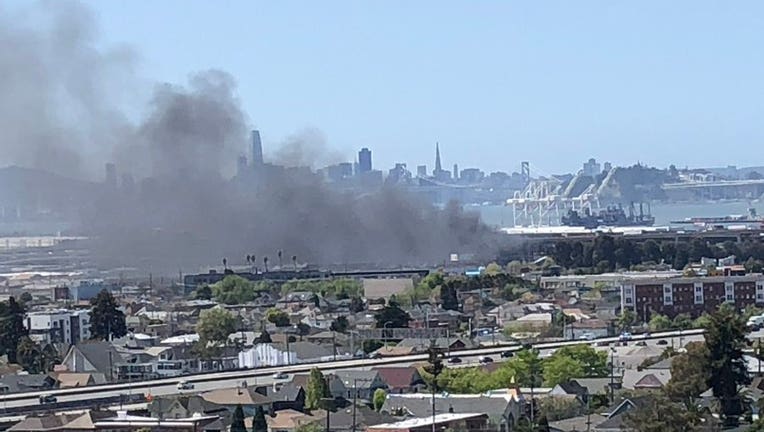 One person was found dead after a fire at an Oakland homeless camp on April 5, 2022. (KTVU FOX 2)

OAKLAND - One person was found dead in an RV after a fire broke out at an Oakland homeless encampment, the city's fire department said.

Five people were displaced by the fire, authorities said.

The camp on Wood Street and 26th Street is an area of West Oakland that has seen several recent fires.

"We do come here quite a bit. It does pose a lot of challenges, the biggest is we don't have a hydrant at the homeless encampment site.," said Oakland Fire Batt. Chief Frank Tijiboy. "We always have a water supply issue. We had to get a hydrant here and pull 450 feet of hose into the encampment to get to the scene."

Tuesday's fire left some who work in the surrounding neighborhood frustrated and fearful.

"They should have had this cleaned up a long time ago," said Joseph Wacker, who works across the street at Soundwave Studios. Instead, he says debris at the encampment has been allowed to pile up. "You know it just takes a couple of embers to come over here. This is an old building. Some of it’s wood, some of it’s brick."

Those who live at the encampment say they're also frustrated with the city's fire prevention efforts.

"Yeah they could do more. If they got the power to do it, do it," said Eric Aikens, who lives at the encampment.

"We can't rest, we can't relax," said Mavin Carter Griffin, who also lives at the encampment. "We do need some help organizing, and it would be nice if we had some funding and maybe a little support, and maybe a conversation with the city once in a while, but we ain't getting nothing, no feedback in the last two years I’ve lived here."

Oakland Fire Department said in the period between March 2021 and March 2022 there were approximately 90 fires of different sizes and degrees between West Grand and Wood streets to 34th and Wood streets. They said the majority of those fires are on Caltrans property at the homeless encampment under the freeway.

KTVU investigated last summer and found homeless encampment fires in the city of Oakland averaged one a day in 2019 then increased to three a day in 2021. Many of those were considered arson.

KTVU reached out to both the City of Oakland and a councilwoman who represents the district to ask them what they're doing to tackle the problem. A response was not received by the time of broadcast.