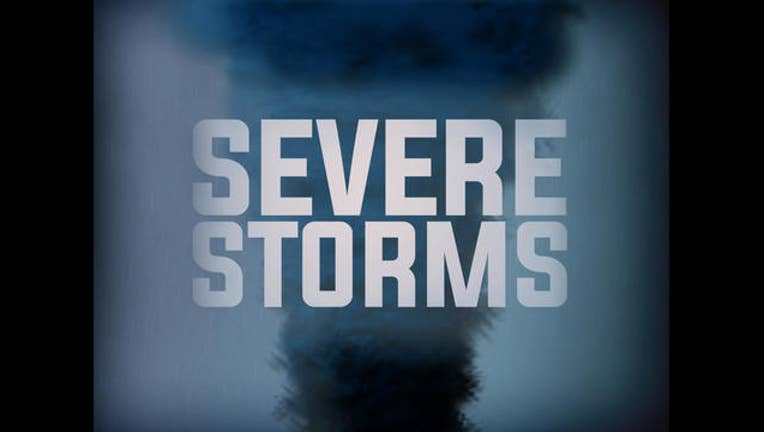 CHICAGO (AP) -- One person was killed when a tornado swept into a mobile home park in Wisconsin Tuesday and another person died when a twister hit a housing subdivision in Oklahoma, as a massive severe storm system battered an area stretching from the South Plains of Texas to the Great Lakes.

Helicopter video from WCCO-TV and KARE-TV shows extensive damage at the trailer park, with several homes reduced to rubble.

"It's a mess," Fitzgerald told the Leader-Telegram of Eau Claire. "It's pretty bad. We have at least one deceased so far and we're still in a search pattern."

Fitzgerald described the scene to KMSP-TV as "total devastation" and said first responders could hear people yelling for help when they arrived. He said at least one child was among the injured.

The Oklahoma storm struck about 7:15 p.m. Tuesday, wrecking much of a subdivision on the southern fringe of Elk City, Oklahoma, about 110 miles west of Oklahoma City.

The storm knocked out telephone service into and out of the city. But Fire Chaplain Danny Ringer told reporters at the scene late Tuesday that one person was known dead from the twister. He also said the storm destroyed 40 homes and damaged 50 to 75 others severely.

The mayor of the hard hit Wisconsin town, Jeff Martin, told KSTP-TV that numerous emergency vehicles went to the trailer park. He estimated the park had around 50 homes.

Devin Feuerhelm told KMSP-TV that his sister, Lenna Samuelson, lives in the park with her two daughters, Ashley and Brenna. He said her sister also had her 2-month-old grandson, Nolan, in the home when the storm hit, and they had nowhere to go but the bathtub.

Amazingly, Nolan escaped with just a couple of scratches, he said. Samuelson's daughters suffered minor injuries, and the mother suffered a gash on her head, but he said all are expected to be fine.

While their home was flattened, the SUV next to it was untouched.

A mobile home is a particularly dangerous place to be during a tornado, according to the National Weather Service. The Storm Prediction Center, which specializes in forecasting and gathering data on tornadoes, says that high winds during a tornado can rip a mobile home without a foundation from its moorings. In 2011, when devastating tornadoes struck in Joplin, Missouri, and in Alabama and Mississippi, 111 of the 551 people killed nationwide in tornadoes, or 20 percent, were in mobile homes, according to the Storm Prediction Center website.

The Wisconsin tornado was part of a huge swath of the Plains and Upper Midwest threatened with severe weather. The area stretches from the Texas Panhandle through Oklahoma, western Kansas, Nebraska and Iowa into Minnesota and Wisconsin.

Other tornadoes in western Oklahoma and the eastern Texas Panhandle have downed power lines and utility poles, but there were no immediate reports of injuries.

By evening, the National Weather Service listed more than 20 reports of tornadoes from Texas, Oklahoma, Kansas, Nebraska and Wisconsin, although some of those could be multiple reports of the same tornado.