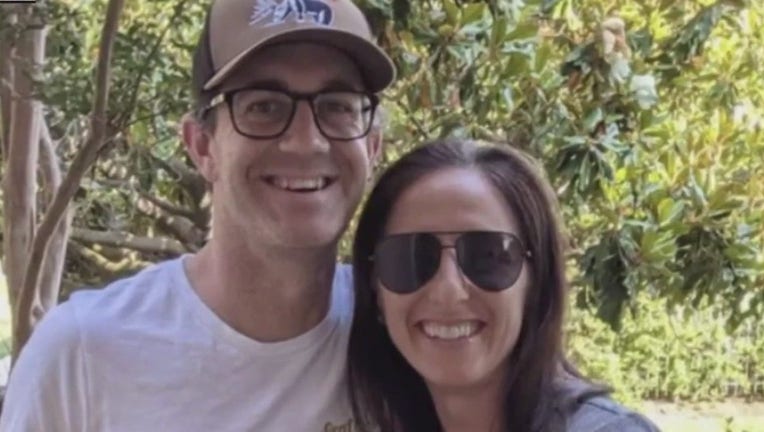 Greg and Grace Ammen, the parents of 7-year-old twins, were killed when their car was struck by a teen racing another driver in Redwood City on Nov. 4, police said.  (KTVU FOX 2)

Two drivers were arrested on suspicion of second-degree murder after they allegedly killed the parents of 7-year-old twins while racing each other in Redwood City earlier this month.

A 17-year-old driver collided with a car carrying Greg Ammen, his wife Grace Spiridon, and their daughters on El Camino Real on Nov. 4, Redwood City police said. That unnamed teen was allegedly racing Kyle Harrison, 23, when the crash happened, leading authorities to arrest both drivers for the deaths of the couple.

"The investigation uncovered that both arrested drivers were engaged in a speed contest just prior to the fatal accident which has been determined to be the cause of the two fatalities," police said Monday.

The wrecked cars were found on the sidewalk. One was engulfed by fire.

The daughters of Ammen and Spiridon survived the crash but were hospitalized with injuries that were described as non-life-threatening injuries. The teen and two passengers in that car were also hospitalized.

A couple was killed Friday night in a Redwood City car crash, officials said. The couple leaves behind twin 7-year-old girls, according to family.

The teen was booked into San Mateo County juvenile jail on November 18 while Harrison was arrested on November 21.

An effort is underway to raise money for the daughters of the deceased couple.

"Grace and Greg were outstanding people and lights of love, support and inspiration to countless friends, family, co-workers and their community," said Liza Spiridon in a GoFundMe. "Nothing mattered more to them than Madison and Olivia."

Henry Lee contributed to this report.