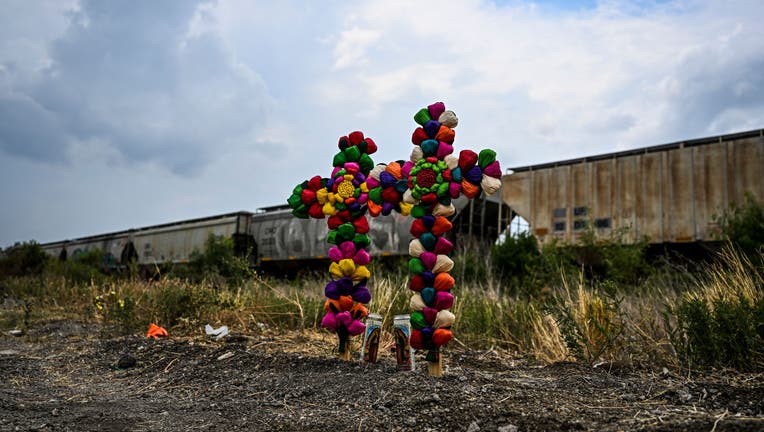 TOPSHOT - Cross and candles are kept at the spot where a tractor-trailer was discovered with migrants inside, outside San Antonio, Texas on June 28, 2022. - US authorities opened a criminal investigation Tuesday after 50 migrants packed into a stifli

SAN ANTONIO - Two Mexican nationals living in the U.S. without proper documentation have been charged with firearm offenses after dozens of migrants were found dead in an abandoned semi-truck in Texas earlier this week.

Juan Francisco D’Luna-Bilbao and Juan Claudio D’Luna-Mendez, who both allegedly overstayed B-2 visas, have been charged through separate criminal complaints as undocumented people in possession of firearms, according to court documents filed Tuesday in the U.S. District Court in the Western District of Texas.

Federal prosecutors have asked that both men be held without bond, The Hill reported. They could face a maximum penalty of 10 years in prison and a $250,000 fine if convicted on the current charges.

A third man, believed to be the big rig's driver, was also reportedly arrested and charged with human smuggling.

In what is believed to be the nation’s deadliest smuggling case on the U.S.-Mexico border, at least 53 migrants have died after dozens of bodies were found in an abandoned tractor-trailer in sweltering heat on the outskirts of San Antonio Monday. Several survivors were in critical condition as of Tuesday with injuries including brain damage and internal bleeding, the Mexican consul general in San Antonio said.

Though it has so far been a tedious process of identifying the victims found without identification documents, and at least one case of a stolen ID, the majority of the victims identified so far were Mexican nationals, while foreign ministers in Guatemala and Honduras have claimed a handful of victims. 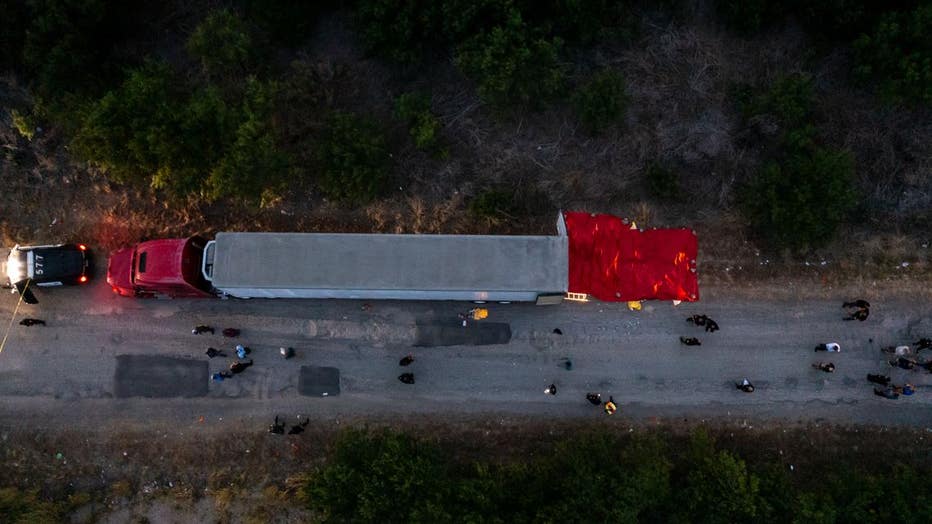 SAN ANTONIO, TX - JUNE 27: In this aerial view, members of law enforcement investigate a tractor trailer on June 27, 2022 in San Antonio, Texas. According to reports, at least 46 people, who are believed migrant workers from Mexico, were found dead i

According to court documents, San Antonio police officers researched the Texas plate on the semi-truck trailer and found it registered to an address in the 100 block of Arnold Drive.

Officers established surveillance on the residence and observed a man, later identified as D’Luna-Bilbao, leaving the home, driving alone in a Ford F-250. Officers conducted a traffic stop on the truck, and D’Luna-Bilbao informed the officers of a firearm in the truck’s center console, the complaint says. Officers found a Fratelli Tanfoglio model GT380, .380 handgun inside the vehicle.

Separately, officers also conducted a related traffic stop on a truck seen leaving the residence driven by another man, later identified as D’Luna-Mendez, according to a second complaint.

The complaints say officers obtained a state search warrant for the residence. More firearms were recovered from D’Luna-Bilbao’s bedroom. They were listed as a Mossberg model 600AT, 12-gauge Any Other Weapon (NFA), and a Beretta model 800 Cougar F. 9mm handgun.

After D’Luna-Bilbao was read his Miranda rights, Homeland Security Investigations special agents conducted an interview with him, during which D’Luna-Bilbao allegedly admitted to possessing the handgun in his truck and the shotgun in his bedroom, according to the criminal complaint.

D’Luna-Bilbao also allegedly admitted his immigration status in the U.S. as a visa overstay.

In his post-Miranda interview, D’Luna-Mendez admitted to possession of the three firearms found in his bedroom, as well as his immigration status in the U.S. as a visa overstay.

ATF examination revealed the firearms seized were not manufactured in Texas and therefore traveled in interstate and/or foreign commerce, according to the court documents.

Immigration records showed both men are citizens and nationals of Mexico living in the U.S. without valid documentation. They once possessed valid B-2 visas, but did not return to Mexico on the expiration of the visas.