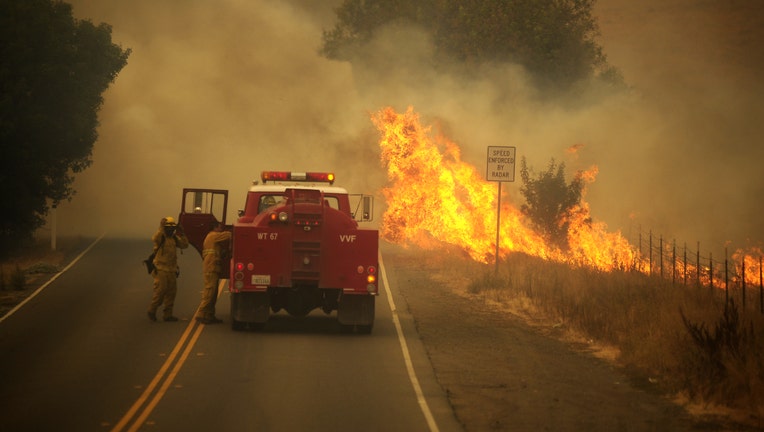 VACAVILLE, CA, USA - AUGUST 19: A view of the site of the Hennessey Fire exploded Tuesday afternoon and nearly doubled in size in a matter of minutes, on August 19, 2020 in Vacaville, California, United States. Many homes were lost along Pleasants Va (Getty Images)

SACRAMENTO, Calif. - California Gov. Gavin Newsom on Wednesday said there are 23 major fires burning throughout the state from the East Bay down to Southern California.

In addition to the major fires, there are more than 350 other smaller ones.

"This fire season has been very active," he said. And the blazes have "stretched the resources of this state."

The astounding number of fires had fatal consequences on Wednesday. A helicopter pilot died during a mission to dump fire on the Hills Fire near Coalinga in Fresno County. The pilot was the only person on board the chopper, Cal Fire said. The National Transportation Safety Board will lead an investigation into the crash.

Most of the fires occurred as a result of the more than 10,400 lightning strikes over the last few days, coupled with record heat.

In that vein, he said California has formed partnerships with the U.S, Forest Service to get backup help including $85 million for firefighting in the state budget.

Many of those fires are burning in the Bay Area, from the Hennessey Fire in the North Bay, to the SCU Fire Complex in the East Bay and beyond, and the CZU Fire in Santa Cruz and San Mateo counties.

All of which are raging and nowhere near contained.

On Tuesday, Newsom declared a statewide emergency over the fires burning across the state and the governor's office said the emergency declaration will help ensure the availability of vital resources to help combat fires burning at each end of the state.