Authorities said the three men charged in the death of TV news security guard Kevin Nishita, are tied to a San Francisco gang.

OAKLAND, Calif. - Three men were charged with murder in the shooting death of Kevin Nishita, a security guard who was killed last November.

Prosecutors from the Alameda County District Attorney's Office charged Shadihia Mitchell, Hershel Kiante Hale, and Laron Gilbert with murder, attempted robbery, and assault. All three suspects have prior offenses of varying degrees. They collectively include a shooting, assault of a peace officer or firefighter, firearms possession and burglary of a vehicle.

He was arrested on unrelated parole violation a few months ago, but was released. Authorities said at that time there was not enough information to charge Gilbert with Nishita's death. 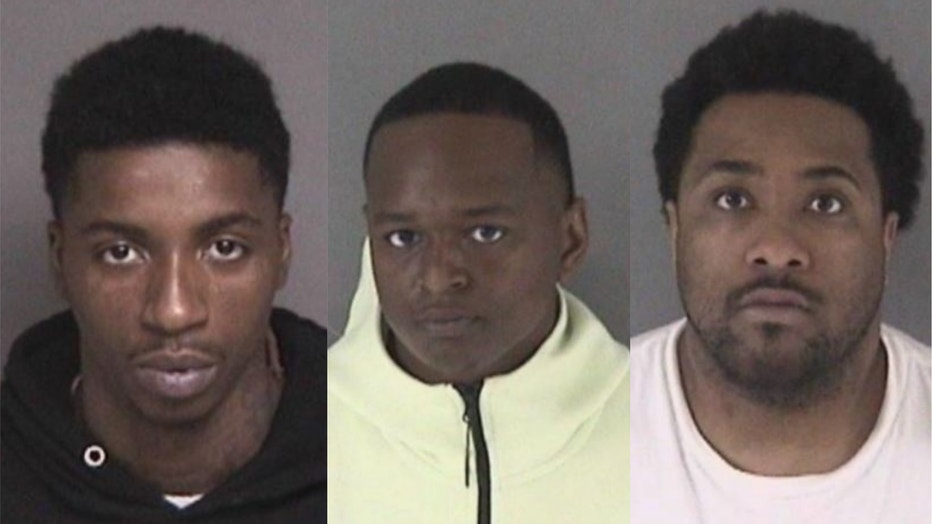 Shadihia Mitchell (pictured left), Hershel Kiante Hale (photographed in the middle), and Laron Gilbert were charged with murder in the death of security guard Kevin Nishita.

Prosecutors said Mitchell is the alleged gunman who opened fire on Nishita as he was guarding a KRON 4 reporter in downtown Oakland on Nov. 24.

Nishita died three days later at a hospital. The armed robbery of the TV news crew took place at the 300 block of 14th Street.

The wife of Kevin Nishita speaks in-depth about the shooting that killed her husband, a retired police officer, as he worked as a security guard for a television crew in Oakland.

Two suspects in this case were arrested in December, one of which was the registered owner of the suspected getaway vehicle in this killing.

Police officials said they believe all three suspects are tied to a San Francisco gang.

Nishita worked as an officer in San Jose, Hayward, Colma and for the Oakland Housing Authority. After retiring, he worked in private security for local news crews, who have been targeted in a string of recent armed robberies.

New details have emerged as an eyewitness and an additional victim of a high-profile fatal Oakland shooting speaks exclusively to KTVU. The witness showed us his wounds after being grazed by a bullet or shrapnel and gave a description of the gunman.