Two people have been arrested in connection with the death of Kevin Nishita, the security guard shot while he was protecting a local TV news crew last month in Oakland, police said Wednesday.

OAKLAND - Two suspects have been arrested and a third person is being sought in the killing of retired police officer and news security guard Kevin Nishita, Oakland Police Chief LeRonne Armstrong announced Wednesday.

One of the suspects was arrested Tuesday night, sources with knowledge of the investigation told KTVU.

A second man, the registered owner of the suspected getaway vehicle used in the killing, was also arrested, according to jail records and sources.

Armstrong did not name the three suspects in the case. He said investigators were working with the district attorney's office and no charges have been filed. 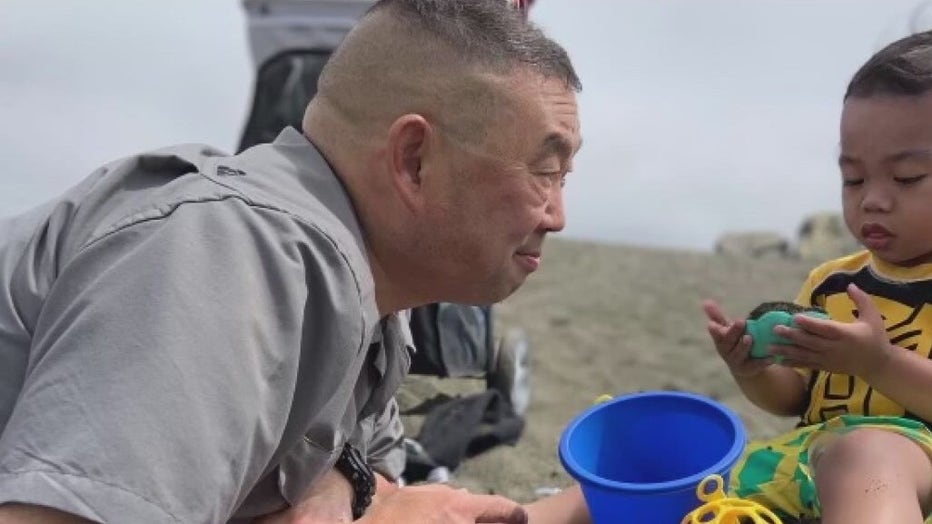 "We really do thank the community for all of the information that they’ve brought forth to help us solve this case -- I believe their assistance was key," Armstrong said.

Sources told KTVU the second suspect was identified as Laron Gilbert, 26. He was booked in Santa Rita Jail early Tuesday morning on a parole violation. Jail records show he was arrested around 2 p.m. Monday in Oakland.

Santa Rita Jail records show that Gilbert was being held on $100,000 bail, and he was not in custody as of late Wednesday morning.

Armstrong said none of the suspects were booked on charges related to the Nishita case.

Nishita was shot on Nov. 24 while protecting a KRON4 reporter in downtown Oakland. Nishita died three days later at a hospital.

Law enforcement officials identified Gilbert as the registered owner of a white Acura TL that was captured on security video fleeing the scene of the shooting, the sources said. It's not clear what role he allegedly played in the shooting.

Earlier this week, Armstrong announced that detectives had recovered the vehicle used in the killing.

Gilbert is no stranger to Bay Area law enforcement and has a history of violent crimes.

He is currently on parole after being sentenced to seven years in state prison after pleading guilty to two felony counts of firing a gun into an inhabited enclosure in San Francisco.

Less than a year before the charges, Gilbert was found not guilty of murder in the killing of a Suisun City man in April 2014.

According to an article in the Daily Republic, Gilbert was acquitted by the jury after his attorney raised questions about the witnesses in the case.

While detectives hunted for a suspect in Nishita’s killing, his family and former law enforcement colleagues have been honoring the fallen guard.

Nishita worked as an officer in San Jose, Hayward, Colma and for the Oakland Housing Authority. After retiring, he worked in private security for local news crews, who have been targeted in a string of recent armed robberies.

Earlier this month, Nishita’s family, friends and officers packed into San Jose Civic Center for a public memorial honoring him.