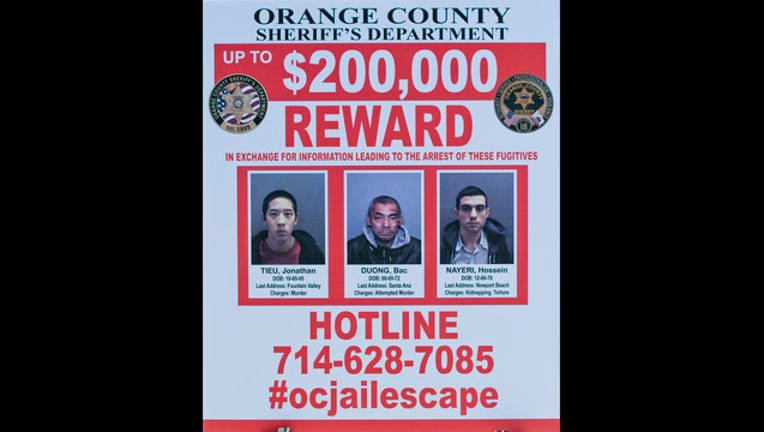 A wanted sign is displayed for the The reward for information leading to the arrest of the the three escaped inmates from the Orange County Central Men's Jail on Tuesday, Jan. 26, 2016. (Paul Rodriguez/The Orange County Register via AP)

SANTA ANA, Calif. (AP) — The investigation of a daring California jail break has led to the arrests of five people, with more expected, but the three inmates who escaped remain at large, the Orange County sheriff said Wednesday.

Sheriff Sandra Hutchens said she definitely believes the inmates had outside help and that the investigation is focusing on local gang members. But about those arrested, Hutchens would only say they had "some connection" to the inmates.

Sheriff's officials said those in custody may not all have had direct ties to the escape, but that the investigation of the breakout led to their arrest.

Hutchens said the men would have needed powerful cutting tools that would not have been available to them inside to get through thick metal, and investigators are looking into how they could have obtained them.

The jail has revised its headcount procedures because it took so long to discover the men were missing, something that she finds deeply troubling. "It's every sheriff's nightmare," Hutchens said.

The men escaped Friday from the jail after cutting a hole in a metal grate then crawling through plumbing tunnels and onto the roof.

They pushed aside barbed wire and rappelled down using a rope made of bed sheets.

Jonathan Tieu, Bac Duong and Hossein Nayeri had all been awaiting trial for unrelated violent crimes.

Nayeri was probably the mastermind of the escape, Hutchens said, saying his sophistication and past have investigators focusing on his role.