The Education Department on Monday opened civil rights investigations into five Republican-led states that have banned or limited mask requirements in schools, saying the policies could amount to discrimination against students with disabilities or health conditions.

The department’s Office for Civil Rights announced the investigations in letters to education chiefs in Iowa, Oklahoma, South Carolina, Tennessee and Utah. Those states have issued varying prohibitions on mask requirements, which the office says could prevent some students from safely attending school.

Education Secretary Miguel Cardona accused the states of "putting politics over the health and education of the students they took an oath to serve."

"The department will fight to protect every student’s right to access in-person learning safely," Cardona said in a statement. 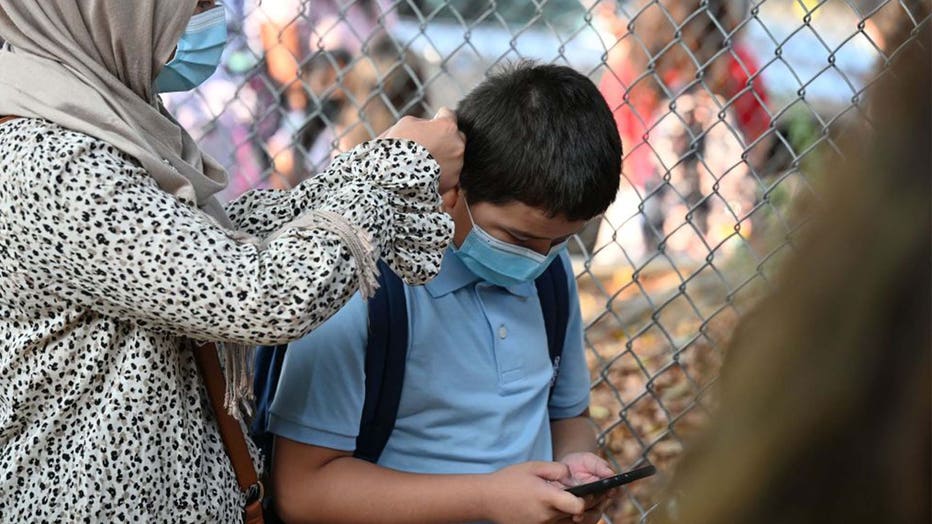 FILE - A parent adjusts her son's face covering as they wait to enter elementary school.

It marks a sharp escalation in the Biden administration’s battle with Republican states that say mask-wearing should be a personal choice. President Joe Biden last week asked Cardona to explore possible legal action, prompting the department to examine whether the policies could amount to civil rights violations.

The states under investigation have adopted a range of policies that outlaw or curb mask mandates. A state law in Iowa forbids school boards from mandating mask wearing. In Tennessee, school mask mandates are permitted, but a recent executive order from Gov. Bill Lee allows families to opt out of them.

Those policies conflict with guidance from the Centers for Disease Control and Prevention, which recommends universal mask wearing for students and teachers in the classroom. The CDC issued the guidance in light of the rapid spread of the highly contagious delta variant of COVID-19.

RELATED: Teacher took off mask for read-aloud and infected half the class with COVID-19, CDC report says

But states that outlaw mask mandates could be preventing schools from taking necessary steps to protect students with disabilities or medical conditions, the department said.

In its letters, the department said it's concerned that the states "may be preventing schools from making individualized assessments about mask use so that students with disabilities can attend school and participate in school activities in person."

Education Department investigations often end with voluntary agreements that remedy alleged violations. But if the agency concludes that states violated civil rights laws, it could issue sanctions as severe as a loss of federal education funding.

The inquiries were launched at the department's discretion and not in response to complaints from parents. But Cardona said he has heard from families who are concerned that state mask policies could put their children at risk.

Some Republicans quickly denounced the investigations. Iowa Gov. Kim Reynolds said individuals should be trusted to make the best decisions for themselves.

"Iowa was able to reopen schools safely and responsibly over a year ago. President Biden and his team know this, yet they’ve decided to pick a political fight with a handful of governors to distract from his own failures," Reynolds said in a statement.

A spokesperson for Oklahoma Gov. Kevin Stitt said that, "until every American citizen is safely out of Afghanistan, President Biden shouldn’t spend a single second harassing states like Oklahoma for protecting parents’ rights to make health decisions for their kids."

But Oklahoma's education chief, who has said mask mandates should be an option, appeared to share the Education Department's concerns. In a statement, State Superintendent Joy Hofmeister said the state "is preventing schools from fulfilling their legal duty to protect and provide all students the opportunity to learn more safely in-person."

RELATED: 'I miss my son': Chicago mom loses her 12-year-old boy to COVID

In South Carolina, the state's top education official has similarly clashed with the governor over mask policies. A statement from the state education agency said Superintendent Molly Spearman has "repeatedly implored" lawmakers to reconsider their ban on mask mandates.

South Carolina education officials said they are sensitive to the law's effect on vulnerable students, and are "acutely aware of the difficult decisions many families are facing concerning a return to in-person instruction."

Some other states previously outlawed mask mandates, but the policies were overturned by courts or are not being enforced, including in Florida, Texas, Arkansas and Arizona. The Education Department has not opened investigations in those states but said it is watching closely and is prepared to take action.

Masks have emerged as a major source of contention as the nation's schools start a new school year during a surge in COVID-19 cases. Although most states let schools decide their own policies, some have taken firm stances for or against mandates.

RELATED: Hostile school board meetings have members calling it quits

States including California, New York and Louisiana have issued statewide mask requirements inside schools, while Texas, Florida and others moved to prevent schools from requiring masks.

In Florida, which had taken one of the toughest stances against mask mandates, a judge ruled Friday that schools are legally allowed to require masks. The judge overturned an order from Gov. Ron DeSantis that had barred such mandates, ruling that it was unconstitutional and cannot be enforced.

In Iowa, a mother of twin boys recently sued the state over its ban on school mask requirements. In her suit, Frances Parr said her children were set to start first grade this year, but she is now teaching them at home over fears about their safety.

In the Des Moines school district, which has opposed the state's policy against mask mandates, officials were encouraged by the support from the federal government. The district is encouraging mask-wearing but is forbidden from requiring it.

"If our state government doesn’t change its position as the pandemic continues then hopefully the federal government will find a legal path that allows us to do more to keep our students and staff safe," district spokesperson Phil Roeder said in a statement.