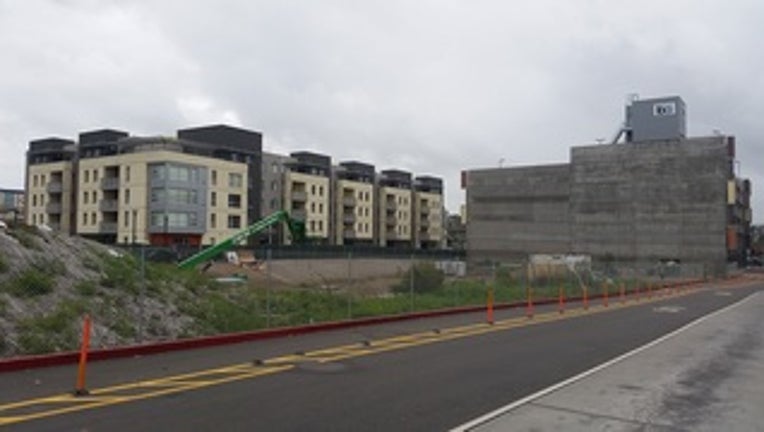 The long-awaited opening of a 90-unit affordable housing complex at Oakland's MacArthur BART station marks the first step in an effort to transform the station from a park-and-ride center to a planned housing and retail hub integrated into the surrounding community.

The plan to transform the roughly 8-acre parking lot into new homes has been in the works for over 20 years, but construction only began a few years ago. The recently completed Mural building -- constructed in coordination with housing nonprofit BRIDGE Housing Corporation -- is only the first of three or four proposed buildings expected to provide as many as 675 new housing units.

The 90 units in the Mural building are all set aside for residents making 50 percent or less of the median area income -- estimated to be $46,000 for a family of four. Rents for the one-, two- and three-bedroom apartments range from $460 to $1,134 per month.

Demand for the affordable units was steep, but they are the only below market rate housing planned for the station so far. BRIDGE senior project manager Joe McCarthy said during a ribbon-cutting ceremony today that
4,800 people applied for a space in the building but only 90 families could be chosen.

In preparation for the housing project, all parking at the station was moved into a 478-space garage next to the Mural building, which has half the capacity of the previous lot.

The yet-to-be constructed buildings at the station are all planned to be market rate housing and will include commercial and retail space, potentially a grocery store, according to BART Director Zakhary Mallett, who represents West Oakland.

But what exactly the remains of the former parking lot at MacArthur will look like in the coming years is still under consideration.

Mallett said overall BART is looking to better integrate its stations into the surrounding neighborhoods, something that was overlooked in BART's early days when the construction of some of its stations focused on serving drivers rather than pedestrians or bicyclists.

While most residents of the area around the MacArthur BART station walk or bike to BART, the parking lot mainly serves people who live far away from the station. BART is looking toward "blending and connecting better in the communities we serve," Mallett said.

Mallett drafted a BART policy requiring that 20 percent of residential developments at BART stations be affordable housing to help guide the agency as it develops its property.

Also on BART's agenda is developing the parking lot around the West Oakland station, once a thriving neighborhood devastated by the construction of the BART station and Interstate Highway 880.

In 2014, BART granted development firm China Harbour an exclusive negotiating agreement for the parking lots and is in the process of gathering community input, Mallett said

But that project has already been in the works for at least a decade. It took 20 years for even the first building to be finished at the MacArthur station and the timeline for the rest remains unclear.

Oakland Mayor Libby Schaaf said today that the MacArthur project was already in the works when she first joined City Hall as a staffer 18 years ago.

"This project has been an example in persistence and perhaps faith," she said.

She and others said they hope that the development will be a model for others moving forward -- not just for the affordable component but for dense, transit-oriented development. Making more affordable housing convenient to public transit not only helps with the region's housing crisis, but encourages sustainability through public transportation as well.

City Councilman Dan Kalb, who represents the surrounding area, said he thinks all market rate projects should always have an affordable component.

"This is a place where there should be more density and if there's an opportunity for there to be more density right on top of a BART station" we should take it, Kalb said.

Benjamin Metcalf, director of the state Department of Housing and Community Development, called the completed development a "beautiful project" and said he hopes it will be a model for "dense, transit-rich, inclusive communities."

"Hopefully with everything except the time it takes to bring it to market we can do more of these," Metcalf said.