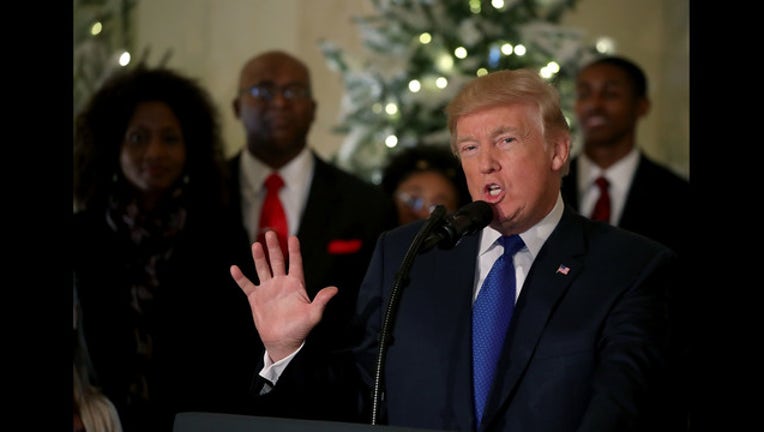 President Donald Trump speaks while flanked by families he said would benefit from tax reform, in the Cross Hall at the White House on December 13, 2017 in Washington, DC.(Photo by Mark Wilson/Getty Images)

WASHINGTON (AP) -- Count President Donald Trump among the personal winners in the $1.5 trillion tax package that congressional Republicans are on the verge of passing. It's not only a political score for Trump but likely a windfall for his real estate empire, too.

Oil drillers would also benefit. So would multimillionaire and billionaire owners of sports teams. Companies would enjoy a bounty from permanently lower tax rates. Lawyers and accountants will profit from the advice suddenly needed to guide clients through the tax plan.

The bill creates plenty of losers, too. An estimated 13 million Americans are projected to lose health insurance. Commuters will no longer receive a perk that has saved them money. Some residents of high-tax states like New York, New Jersey and California will pay more in taxes.

And millions of American households could face tax hikes in coming years. That's because their new tax breaks are set to expire after 2025. And their taxes could creep up because the IRS has been directed to use a less generous gauge of inflation in adjusting tax brackets.

Republican lawmakers have sold their far-reaching legislation as benefiting everyone in the long run because, they argue, it will speed up economic growth. But most economists say that any boost in growth would be modest in the long term. And most argue that at least some of the tax benefits will be undermined by the much higher budget deficits that help pay for them.

Among the tax plan's winners:

At least temporarily, companies with profits that double as the owner's personal income would enjoy a substantial tax break. Consider the Trump Organization. It consists of about 500 such "pass-through" entities, according to the president's lawyers. Rather than pay the top rate of nearly 40 percent, Trump would likely be taxed on these profits at closer to 30 percent.

The final bill also appears to specifically benefit the real estate sector, the bedrock of the Trump family's wealth, with benefits for depreciating the value of property held by pass-through companies.

The president's family didn't receive every possible benefit. The estate tax on inheritances, for example, will stay in place, though it will apply only to the portion of a family's estate that exceeds $11 million -- twice the previous level -- at least through 2025. And the alternative minimum tax, which is intended to prevent the wealthy from exploiting loopholes to avoid taxes, would stay in place as well, though its higher thresholds would also be temporary.

It's no longer off limits to drill in Alaska's Arctic National Wildlife Refuge for oil and natural gas. President Barack Obama had sought to protect the 19.6-million acres, a home for polar bears, caribou, migratory birds and other wildlife. But under the Republicans' tax plan, fossil fuel companies could tap into oil and gas reserves. Alaska Sen. Lisa Murkowski and other Republicans insist that drilling can be done safely with new technology while ensuring a steady energy supply for West Coast refineries.

Major sports teams will still be able to build and renovate their stadiums with tax-exempt municipal bonds. The House version of the tax bill had initially scrapped access to this form of debt by sports teams, a provision that drew objections from the NFL. But the final bill retains it.

Such tax-advantaged public financing should make it easier to have the Oakland Raiders, for example, move to Las Vegas and play in a new $1.9 billion dome. Forbes estimates the Raiders, owned by Mark Davis, to be worth $2.4 billion.

The tax rate for most companies would drop to 21 percent from 35 percent. This is a permanent rate cut, which, along with a shift to a lower rate on some foreign earnings, could help boost corporate profits. Not surprisingly, the stock market has soared in part over anticipation of these lower corporate taxes. The Standard & Poor's 500 stock index has jumped nearly 24 percent since Trump's election last year.

Rather than close loopholes, the tax bill appears to create more of them. Tax lawyers and accountants will likely be besieged by clients looking for professional guidance in restructuring companies and incomes to avoid taxes. In fact, tax experts and lawyers who reviewed a prior version of the tax bill outlined a slew of loopholes in a 35-page report in which it warned that the bill would "allow new tax games and planning opportunities for well-advised taxpayers."

At the same time, many individuals and groups are likely to be on the losing end of the tax legislation. Among them:

The tax bill removes a penalty that was charged to people without health insurance as required by Obama's 2010 health insurance law as a way to hold costs down for everyone. By eliminating this mandate, the tax bill will likely deprive 13 million people of insurance, according to estimates by the Congressional Budget Office.

The repeal of the health insurance mandate will help preserve revenue to pay for the tax cuts. The government would no longer have to subsidize as many low-income people receiving insurance. This change would generate $314.1 billion over 10 years, according to the Joint Committee on Taxation.

It could get more expensive to ride the subway or park your car near work. Employers would no longer be able to deduct from their taxes the cost of providing parking or transit passes worth up to $255 a month to workers. Bicycle commuters would also lose their benefit from companies.

Technically, companies could still offer this benefit. But under the tax bill, they will lose the financial incentive to do so. Such a change could have the effect of reducing ridership on public transit and possibly increase costs for riders on rail and bus systems.

The bill imposes a $10,000 cap on people who deduct their state, local and property taxes. Currently, there is no limit on how much in state and local taxes you can deduct.  Some Republican lawmakers in such high-tax states such as California and New York intend to vote against the bill because their constituents' taxes could increase as a result of the provision. Their opposition, though, isn't expected to block the bill's passage.

Most Americans would receive tax cuts initially. But the lower rates and a host of other benefits would expire after 2025. This effectively sets up an $83 billion tax hike for many millions of Americans in 2027.

What's more, people's taxes could continue to creep up because the plan will adjust the tax brackets at a less generous measure of inflation than it formerly did. The slower indexing for inflation amounts to a $400 billion tax hike between 2028 and 2037 that would help finance the lower corporate rates, Lily Batchelder, a New York University law professor and former Obama White House adviser, observed on Twitter.

Congress could decide years from now to extend the lower tax rates. But doing so would increase the deficit far more than the $1.5 trillion now being estimated by Congress' Joint Committee on Taxation.