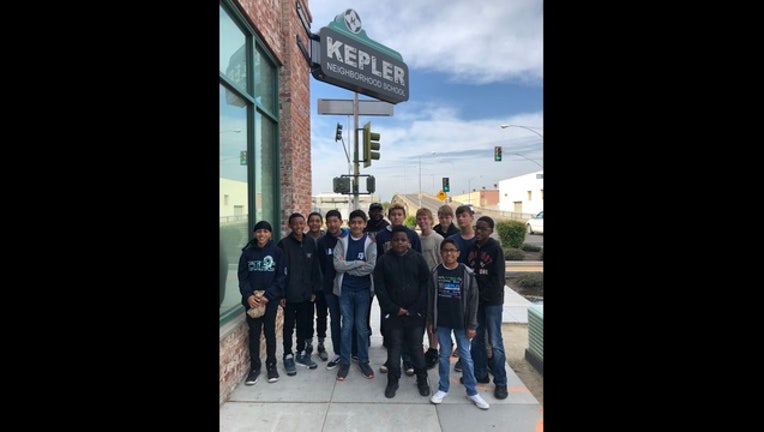 FRESNO, Calif. (KTVU) - A group of middle school boys in Fresno is being praised for coming to the aid of a woman who was dangling from a bridge, as she considered ending her life.

It happened last Thursday, while members of the Kepler Neighborhood School's volleyball team were working out after school.

The team was jogging near the school campus in downtown Fresno when a couple of the boys noticed a woman dangling from the Stanislaus Bridge.

The boys then sprung into action and worked to persuade the woman not to jump. The team's coach, Elliot Murray, was also on hand and he quickly called 911, as the team talked with the woman and called on her to come off the bridge.

"While the woman was hanging and on the verge of falling off the bridge, students reminded her that her life was worth it and begged her not to give up," the school detailed the tense moment in a Facebook post.

"The boys’ pleas led to the woman pulling herself up to safety," school said.

Fresno police said when officers arrived on scene, a 47-year-old woman was located nearby. Officers said she admitted to attempting suicide.

After further questioning, they determined she was a danger to herself and transported her to a mental health facility for evaluation, according to police spokesman Lt. Mark Hudson.

"This is absolutely incredible," said Hudson, "where they took it upon themselves to call 911 and aid in getting the person back off the bridge."

School officials expressed their pride for the students, for their quick actions and for rising to the occasion during a moment of crisis.

“These young men stepped up when no one else could,” said Timothy Yeager, Kepler School’s Director of Student Services. “Words fail to do justice how incredibly proud we are of these Kepler scholars and Coach Elliot’s leadership.”

And the gravity of the moment was not lost on the middle school boys.

It was an intense experience, one that they said they'll never forget as they expressed gratitude for being at the right place at the right time to help someone in need.

Their coach called it a life-saving, miracle moment. “We pour our hearts into the lives of these kids every day," Coach Murray said, "and they stepped up in a way they'll never forget. I'm so proud of them.”

If you or a loved one is feeling distressed, call the *National Suicide Prevention Lifeline (http://suicidepreventionlifeline.org/)*. The crisis center provides free and confidential emotional support 24 hours a day, seven days a week to civilians and veterans. You can call the National Suicide Prevention Lifeline at 1-800-273-8255 or text 741-741.