A 31-year-old Milwaukee man was shot and killed by police Friday morning after allegedly carjacking two vehicles, led police on a high-speed chase and kidnapped one of the drivers while armed with a firearm.

FRANKLIN, Wis. - A man was shot and killed by law enforcement after a series of incidents in Franklin Friday morning, Sept. 3.

Authorities said the man allegedly carjacked two vehicles, led police on a high-speed chase and kidnapped a person while armed.

Investigators believe the incident began early Friday in Milwaukee, where the suspect is reported to have kidnapped a male victim near 26th and Mitchell, a new release from the Milwaukee County Sheriff's Office (MCSO) said Friday afternoon.

The suspect then drove the victim to at several stores, including Walmart and a gas station. Along the way, the victim alerted several people that he had been kidnapped and to call 911. Police responded and a chase began.

The suspect led law enforcement on a pursuit southbound on Interstate 94 at speeds greater than 110 mph. The suspect then exited the freeway at Elm Road and continued north on 27th Street before crashing near 27th and Ryan where he stole another vehicle at gunpoint, according to the release from MCSO.

​​At 27th and Ryan, the suspect engaged in an "armed confrontation" with an Oak Creek police officer before the pursuit continued north on 27th Street where the suspect hit another vehicle near Sycamore.

The suspect got out after the crash holding a gun and was engaged by four deputies, one Franklin police officer and four Oak Creek police officers. He was fatally shot.

The suspect is a 31-year-old white man from Milwaukee, according to MCSO. Investigators said his gun was recovered, but are still looking into whether he fired the weapon.

"We're just thankful that all of our officers are safe," said Milwaukee Sheriff Earnell Lucas.

No deputies or officers were injured. No other individuals involved reported physical injuries. The West Allis Police Department is leading the investigation.

The incident closed 27th Street between Rawson and College for roughly 11 hours, traffic reopening around 7:30 p.m.

The events of Friday morning were something that obviously came as a surprise and shock to many as they went about their usual routines.

The events of Friday morning were something that came as a surprise and shock to many as they went about their usual routines. For Ashley Olesen, it was a morning unlike any other as she was going about her business at the O&H Danish Bakery.

"I was waiting on customers and I saw what looked like a guy running down the road, he had his hands up in the air," Olesen said.

Moments before, a passerby captured video of a silver Chrysler sedan crashing into a pole at the northwest corner of 27th and Ryan Road. A man jumped out of the car, armed with a long gun of some kind, and ran across the roadway into the eastbound lanes of Ryan Road – pointing the gun at a driver who gets out of the car and begins running away.

"He ran from another vehicle that apparently was being caught in the middle of everything," she said.

The suspect then got into a Chevrolet sedan, drove over the median and took off to the north.

"When I saw him, that’s when I saw the other car hook a u-turn and drive up 27th Street," said Olesen. "Then the cops all went up there chasing after him."

Autoshop employee Austin Klemstein was just starting his day at a shop just south of 27th and Sycamore. 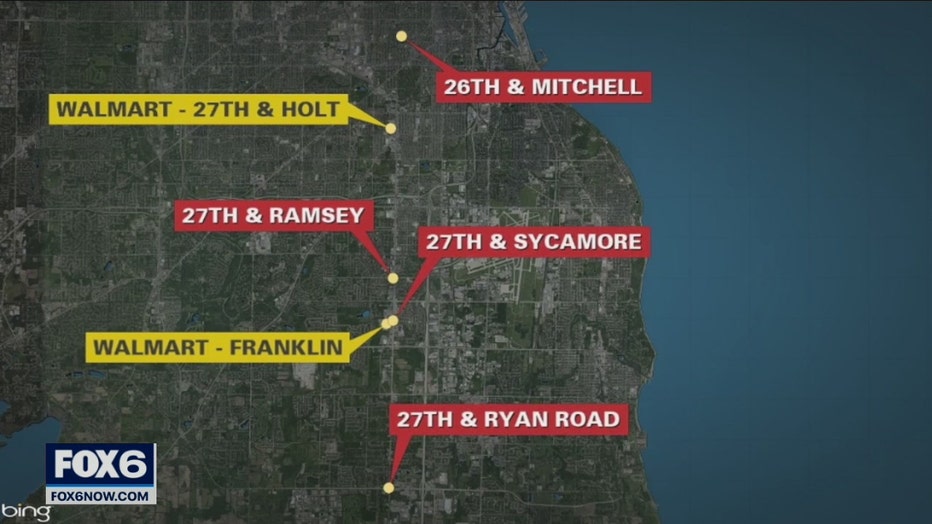 Points of interest Friday leading up to fatal law enforcement-involved shooting in Franklin.

"A tan Malibu going 100 mph came flying down the intersection, flipped, hit two cars, shots fired at the point and we all ran at that point," Klemstein said.

Police officers shot the man, who fell to the ground.

"Ducked and got cover at that point you just never where it’s going to be shooting at that point," Klemstein said.

A witness to part of Friday's Franklin-area crime spree told FOX6 News he saw a man fire his weapon before being shot by law enforcement.

Talib Almaghrabi watched it all happen from inside his car on the way to work.

So you stop, and the only thing you hear ‘pop pop’ from all over. I was like ducking in the car," said Almaghrabi. "It’s like seriously, this is what’s going on here?"

Almaghrabi said police questioned him for several hours about what he saw. He said he saw the suspect fire his weapon toward officers "either two or three times" and that he heard officers say "drop the gun, drop the gun, you're not listening."