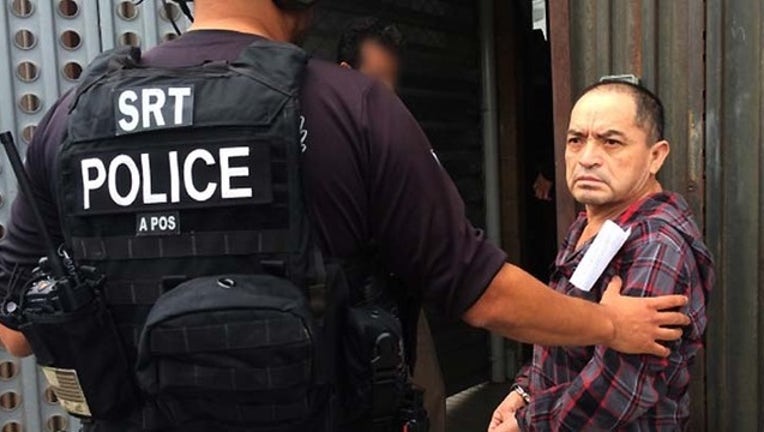 Heriberto Gomez Galicia, aka Ramiro Gomez Lopez, was transferred to the custody of representatives from the Mexican Attorney General's Office.

A warrant issued by authorities in the state of Oaxaca in July1992 accuses Gomez of seven murders, two attempted murders and causing malicious bodily injury to two additional victims.

Six of those targeted in the assault were children, including an 8-year-old who died. One of the wounded youths was only 3.

According to Mexican authorities, the victims of the October 1991 massacre were members of a local family with whom Gomez and his two brothers had feuded.

The warrant alleges that Gomez, along with his two brothers, stalked the family's patriarch as he tended his livestock. When the father fled, the suspects allegedly sought out other members of the family and carried out the attack.

In the fall of 2014, the U.S. Marshals Service received a lead regarding Gomez's possible whereabouts. The information indicated the fugitive murder suspect might have used his dead brother's name to register a vehicle in California.

Subsequently, the Task Force obtained a copy of the outstanding arrest warrant from the PGR and a photo lineup featuring the murder suspect.

On Nov. 16th, Gomez was located and taken into custody by ERO and the U.S. Marshals Service at his residence in Watsonville.

In a sworn statement to ERO officers, Gomez admitted using four aliases, allowing him to illegally obtain work authorization and identification documents, including a California driver's license and a California Benefits Card (Medi-Cal).

"For the victims in this case, justice has been a long time coming, but they can take consolation in the fact that the alleged assailant is now being held accountable," said Timothy Aitken, field office director for the (ICE) Enforcement and Removal Operations San Francisco.

"This fugitive's arrest and repatriation are the direct result of the ongoing cooperation between U.S. law enforcement and our Mexican counterparts. "