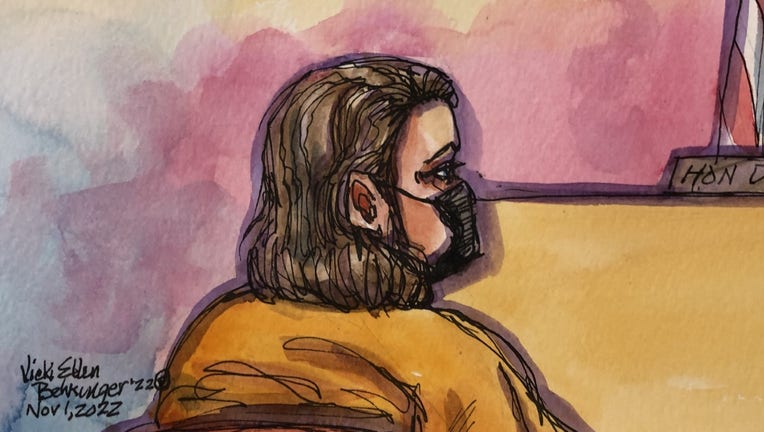 A courtroom sketch of suspect, David DePape at his arraignment on Tuesday, November 1, 2022, on charges in the attack on Paul Pelosi. (Illustration by Vicki Behringer)

SAN FRANCISCO - A San Francisco judge on Tuesday ordered the man accused of breaking into House Speaker Nancy Pelosi’s home, beating her husband and seeking to kidnap her, to be held without bail.

Adam Lipson, a lawyer for defendant David DePape, entered a not guilty plea on Depape’s behalf during the brief hearing in Superior Court in San Francisco. It was the first public appearance since the early Friday attack for DePape.

Wearing orange jail clothing, DePape only spoke to tell Judge Diane Northway how to pronounce his last name. The 42-year-old defendant is scheduled to return to court Friday.

After the hearing, Lipson said he looks forward to providing DePape with a "vigorous defense." He also said he met DePape on Monday night for the first time and had not seen the police reports yet.

"We’re going to be doing a comprehensive investigation of what happened. We’re going to be looking into Mr. DePape’s mental state, and I’m not going to talk any further about that until I have more information," said Lipson, who noted that a no-bail detainer in state court is a moot point because DePape also has been placed on a federal hold in the case.

DePape was released from the hospital in the wee hours of the morning Tuesday and is currently in custody, according to a spokesman for the district attorney.

DePape, who was last living in a garage in Richmond, was arraigned on charges of attempted murder, burglary, assault with a deadly weapon, elder abuse, and false imprisonment. 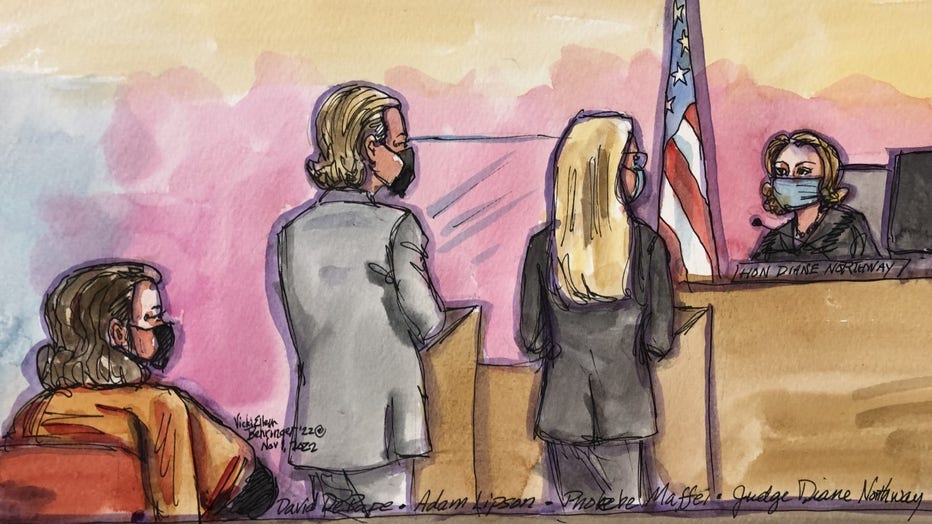 A courtroom sketch of suspect, David DePape at his arraignment on Tuesday, November 1, 2022, on charges in the attack on Paul Pelosi.

If convicted on the state charges he faces 13 years to life.

In federal court records released on Monday, DePape, 42, told police he wanted to hold the Democratic leader hostage and "break her kneecaps" when he broke into the Pelosi home on Friday at 2:30 am. in San Francisco's Pacific Heights neighborhood to show other members of Congress there were "consequences to actions."

In a chilling federal complaint, officials allege DePape smashed in through the back window, carrying zip ties, tape and a rope in a backpack, went upstairs where 82-year-old Paul Pelosi was sleeping, and demanded to talk to "Nancy."

"This house and the speaker herself were specifically targets," San Francisco District Attorney Brooke Jenkins said at a Monday evening news conference announcing state charges against DePape, including attempted murder.

In a statement late Monday, Speaker Pelosi said her family was "most grateful" for "thousands of messages conveying concern, prayers and warm wishes." Her husband underwent surgery for a fractured skull and other injuries after the attack. She said he was making "steady progress on what will be a long recovery process."

The stark narrative laid out by state and federal prosecutors stands in contrast to the mocking jokes and conspiracy theories circulated by far-right figures and even some leading Republicans just a week before midterm elections. A record number of security threats are being reported against lawmakers and election officials.

In addition to the state charges, DePape was also charged Monday in federal court with assault and attempted kidnapping. influencing, impeding or retaliating against a federal official by threatening or injuring a family member.

It's unclear when he will be arraigned on federal charges.