Amber Alert deactivated after 3-year-old has been found

Amber Alert deactivated after 3-year-old has been found 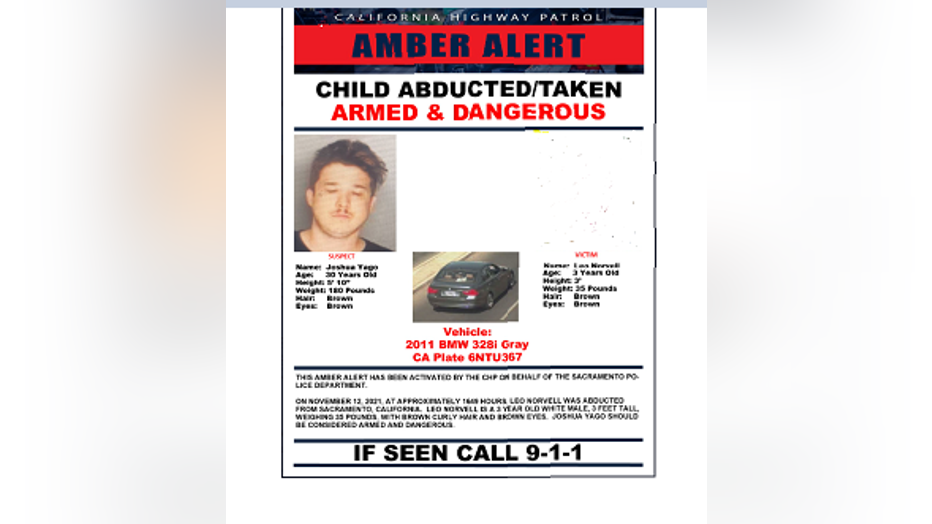 A 3-year-old boy from Sacramento, who was the subject of an Amber Alert and whose mother was shot, has been found safe according to authorities.

The California Highway Patrol issued the emergency alert Friday evening for Leo Norvell, saying the child was taken by Joshua Yago, who was described as armed and dangerous.

Both Norvell and Yago were found together in Hayward early Saturday morning by the Hayward Police Department.

The Amber alert was cancelled and Norvell is said to be in good health as HPD works to reunite the family.

Yago is currently in police custody and will be booked on charges related to the kidnapping and earlier shooting.

Investigators said Sacramento Police responded to a report of an assault late Friday afternoon. When they arrived on scene, they found a man and a woman suffering from non-life threatening gunshot wounds.

Officers said they learned that Yago had driven off with the woman's car, and her son, Leo.

Pictures of the toddler and his physical description have been removed from earlier versions of the KTVU story, since he has been found and is now back with his family.

Police said Yago and the child's mother know each other, but have not yet disclosed the nature of their relationship.

As the investigation remains active, authorities thanked the community and outside agencies for their assistance.

This was the second Amber Alert involving the Bay Area in consecutive days.

A separate Amber Alert was issued Thursday evening in the Bay Area, when a woman allegedly stole an SUV that had a 1-year-old inside. The child was found hours later in Pittsburg and police arrested a suspect on Friday.