Olaf Scholz was voted in as chancellor by the German parliament on Dec. 8, 2021, succeeding Angela Merkel after her 16 years in the role. Credit - Deutscher Bundestag via Storyful

BERLIN - Angela Merkel was assured of a place in the history books as soon as she became Germany's first female chancellor on Nov. 22, 2005.

Over the next 16 years, she was credited with raising Germany's profile and influence, working to hold a fractious European Union together, managing a string of crises and being a role model for women.

Now that near-record tenure has ended with her leaving office at age 67 to praise from abroad and enduring popularity at home. Her successor, OIaf Scholz, took office on Wednesday.

Merkel, a former scientist who grew up in communist East Germany, is bowing out about a week short of the record for longevity held by her one-time mentor, Helmut Kohl, who reunited Germany during his 1982-1998 tenure.

While Merkel perhaps lacks a spectacular signature achievement, the center-right Christian Democrat came to be viewed as an indispensable crisis manager and defender of Western values in turbulent times. 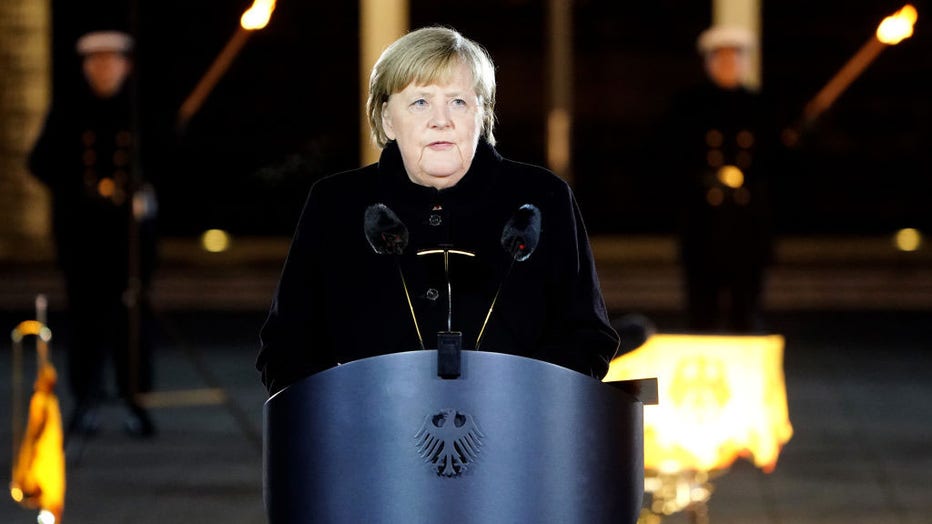 "It’s undeniable that she’s given Germany a lot of soft power," said Sudha David-Wilp, the deputy director of the German Marshall Fund of the United States' Berlin office. "Undoubtedly she’s elevated Germany’s image in the world."

"When she first came onto the scene in 2005, a lot of people underestimated her, but she grew in stature along with Germany’s role in the world," David-Wilp added. Others in Europe and beyond "want more of an active Germany to play a role in the world — that may not have been the case before she was in office, necessarily."

In a video message at Merkel's final EU summit in October, former U.S. President Barack Obama thanked her for "taking the high ground for so many years."

"Thanks to you, the center has held through many storms," he said.

Merkel was a driving force behind EU sanctions against Russia over its annexation of Crimea and backing of separatists in eastern Ukraine, and also spearheaded so-far-unfinished efforts to bring about a diplomatic solution there. She was regarded as being "able to have a dialogue with (Russian President Vladimir) Putin on behalf of the West," David-Wilp said.

She was steadfast in pursuing multilateral solutions to the world's problems, a principle she set out at a military parade in her honor last week.

The global financial crisis and the migrant influx "made clear how much we depend on cooperation beyond national borders and how indispensable international institutions and multilateral instruments are to be able to cope with the big challenges of our time," Merkel said, identifying those as climate change, digitization and migration.

That stance was a strong counterpoint to former U.S. President Donald Trump, with whom she had a difficult relationship. At their first meeting in the White House in March 2017, when photographers shouted for them to shake hands, she quietly asked Trump "do you want to have a handshake?" but there was no response from the president, who looked ahead.

Merkel dismissed being labeled as "leader of the free world" during that period, saying leadership is never up to one person or country.

Still, she was viewed as a crucial leader in the unwieldy 27-nation EU, famed for her stamina in coaxing agreements in marathon negotiating sessions.

"Ms. Merkel was a compromise machine," Luxembourg Prime Minister Xavier Bettel said recently. When negotiations were blocked, she "mostly found something that unites us to move things along."

That was on display in July 2020, when EU leaders clinched a deal on an unprecedented 1.8 trillion-euro ($2 trillion) budget and coronavirus recovery fund after a quarrelsome four-day summit.

At her 107th and last EU summit, European Council President Charles Michel told Merkel: "You are a monument." A summit without her would be like "Rome without the Vatican or Paris without the Eiffel Tower," he added.

The appreciation from her counterparts was genuine, although there was plenty of friction over the years. Merkel always sought to keep the EU as tightly knit as possible but strongly defended Germany's interests, clashing with Greece during the debt crisis and disagreeing with Hungary, Poland and others over their refusal — unlike Germany — to host migrants arriving in Europe.

Merkel said she was bowing out of the EU "in a situation that definitely gives me cause for concern as well."

"We have been able to overcome many crises in a spirit of respect, in an effort always to find common solutions" she said. "But we also have a series of unresolved problems, and there are big unfinished tasks for my successor."

That's also true at home, where her record — dominated by the crises she addressed and including a pandemic that is flaring anew as she steps down — is a mixed bag. She leaves Germany with lower unemployment and healthier finances, but also with well-documented shortcomings in digitization — many health offices resorted to fax machines to transmit data in the pandemic — and what critics say was a lack of investment in infrastructure.

She made progress in promoting renewable energy, but also drew criticism for moving too slowly on climate change. After announcing in 2018 that she wouldn't seek a fifth term, she failed to secure a smooth transition of power in her own party, which slumped to defeat in Germany's September election.

The new governing coalition under Scholz says it wants to "venture more progress" for Germany after years of stagnation.

But Germans' overall verdict appears to remain favorable. During the election campaign, from which she largely was absent, Merkel's popularity ratings outstripped those of her three would-be successors. Unlike her seven predecessors in postwar Germany, she is leaving office at a time of her choosing.

Merkel’s body language and facial expressions sometimes offered a glimpse of her reactions that went beyond words. She once lamented that she couldn’t put on a poker face: "I’ve given up. I can’t do it."

She wasn’t intimidated by Putin’s style. The Russian president once brought his Labrador to a 2007 meeting with Merkel, who later said she had a "certain concern" about dogs after having once been bitten by one.

She was never the most glamorous of political operators, but that was part of her appeal – the chancellor continued to take unglamorous walking holidays, was occasionally seen shopping at the supermarket and lived in the same Berlin apartment as she did before taking the top job.

Named "The World’s Most Powerful Woman" by Forbes magazine for the past 10 years in a row, Merkel steps down with a legacy of breaking through the glass ceiling of male dominance in politics — although she also has faced criticism for not pushing harder for more gender equality.

Obama said that "so many people, girls and boys, men and women, have had a role model who they could look up to through challenging times."

Former President George W. Bush, whose relationship with Merkel's predecessor, Gerhard Schroeder, soured over the latter's opposition to the U.S.-led war in Iraq, said that "Angela came in and changed that completely."

"Angela Merkel brought class and dignity to a very important position and made very hard decisions ... and did so based upon principle," Bush told German broadcaster Deutsche Welle in July. He described her as "a compassionate leader, a woman who was not afraid to lead."