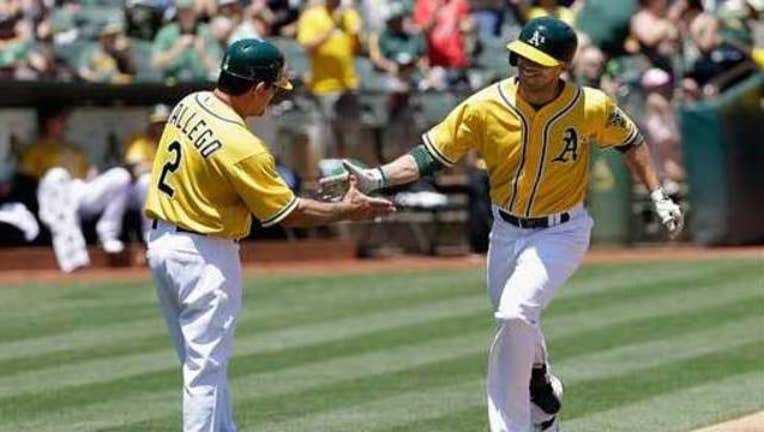 OAKLAND, Calif. (AP) — Athletics rookie Chris Bassitt recorded two quick outs in the sixth inning and was on the verge of heading back to the dugout when he hit Robinson Cano of the Mariners in the right foot with a 1-2 pitch.

Things quickly got out of hand after that.

Nelson Cruz followed with a double and former Oakland outfielder Seth Smith drove in both runners with a two-run single that provided the difference in Seattle's 2-1 win over the A's on Sunday.

"It was a stupid pitch," Bassitt said. "That was me trying to overthrow it a little bit. I tried to back foot him and instead I front-foot him. It a slider in and I shanked it."

A's manager Bob Melvin praised his young pitcher, who is likely to be sent back down to the minors now that Gray is back with the ballclub.

"He pitched great," Melvin said. "He threw the ball over the plate, he threw strikes. When you give up two runs you're in a good position."

Except that Oakland's struggling offense managed just one run — Sam Fuld's home run in the third.

Beyond that, the A's couldn't get much going against Seattle rookie Mike Montgomery and three relievers.

Coming off two straight shutouts, Montgomery (4-2) gave up one run and six hits in 5 2-3 innings. He walked one and struck out two.

Montgomery was trying to join Randy Johnson as the only players in franchise history to pitch three consecutive shutouts.

Fernando Rodney pitched the ninth for his 16th save.

The Mariners announced before the game that manager Lloyd McClendon will miss Seattle's upcoming series against Detroit to attend the funeral for his younger sister in Indiana.

"We didn't get much early on," McClendon said. "That young kid (Bassitt) has got a big arm. He kept us off balance and did a nice job. But our guys came through late."

Montgomery extended his scoreless streak to 20 innings before Fuld homered with one out in the third. It was Fuld's first homer since last Sept. 14, when he also connected against the Mariners.

The A's threatened in the bottom half before Mark Lowe replaced Montgomery and struck out pinch-hitter Josh Reddick.

"We seem to go on streaks, sometimes not so good and sometime really good," Melvin said. "More than anything we're trying to sneak up close to .500."

Mariners: McClendon was expected to fly back to Seattle with the team following the game, then will travel to Indiana to be with his family. Bench coach Trent Jewett will assume the managerial duties until McClendon rejoins the team.

Athletics: INF Nate Freiman cleared waivers and has been outrighted to Triple-A Nashville.

Mariners: RHP Hisashi Iwakuma (0-1) will be activated from the disabled list and start Monday's series opener against the Tigers. He has been out since April 24 with a strained right lat.

Athletics: Gray (9-3) starts Tuesday against the New York Yankees in his first appearance since June 25 when he had to be hospitalized for salmonella. Gray's 2.09 ERA is the second-lowest in the AL.