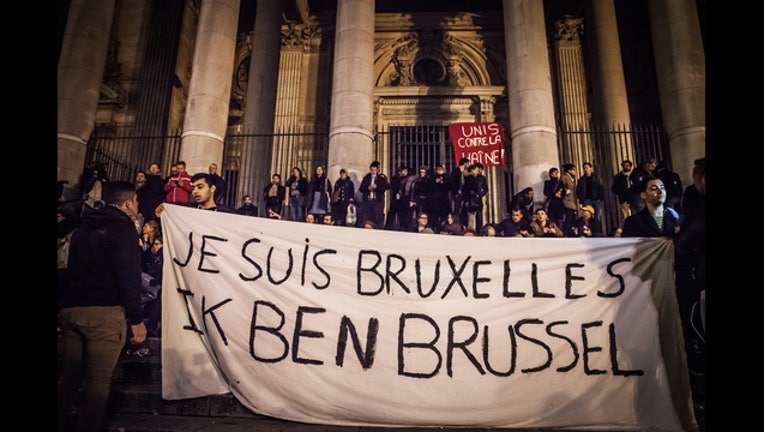 BRUSSELS (AP) — The arrest Friday of five men suspected of links to the Brussels bombings, including the last known fugitive in last year's Paris attacks, raised new questions about the extent of the Islamic State cell believed to have carried out the intertwined attacks that left 162 people dead in two countries.

After weeks of speculation about a mysterious "man in the hat" who escaped the Brussels attacks while three suicide bombers blew themselves up, authorities were checking whether that man was indeed Mohamed Abrini, the last identified suspect at large from the Paris attacks until Friday. Another man arrested in a series of raids, identified as Osama K. by Belgian authorities, was linked to the Nov. 13 Paris attacks by French authorities on March 22, hours after the Belgium attacks.

Abrini and Osama K. are now suspected of playing a role in the two biggest attacks carried out by the Islamic State group in Europe over the past year, killing 130 people in Paris and 32 in Brussels. French authorities renewed their call to arrest an armed and dangerous Abrini within hours of the Brussels attacks.

"We are investigating if Abrini can be positively identified as the third person present during the attacks in Brussels National Airport, the so called 'man in the hat,'" said prosecutor Eric Van der Sypt.

The man walked away from the airport attack, where two suicide bombers blew themselves up, killing 16.

Authorities detained four other men on Friday, including Osama K., suspected of having contact with the suicide bomber who blew himself up in the Brussels subway the same morning, killing another 16.

Osama K. was filmed by security cameras in the City 2 shopping mall when the bags were bought that were used by the suicide bombers who attacked the airport.

Belgian prosecutors said Abrini's fingerprints and DNA were not only in a Renault Clio used in the Nov. 13 attacks in Paris, but also in an apartment in the Schaerbeek area of Brussels used by the Brussels bombers.

Friday's detentions were a rare success for Belgian authorities, who have been accused for months of mishandling the investigation. Both the interior and justice ministers had offered to resign before the detentions.

Despite multiple arrests, Brussels remains under the second-highest terror alert, meaning an attack is considered likely.

Abrini's precise role in the Paris attacks has never been clear, nor his full link to the Brussels attacks. Abrini is a 31-year-old Belgian-Moroccan, known as a petty criminal before he was believed to have traveled last summer to Syria, where his younger brother died in 2014 in the Islamic State's notorious francophone brigade.

Abrini went multiple times to Birmingham, England, last year, meeting with several men suspected of terrorist activity, a European security official has told The Associated Press. The official spoke on condition of anonymity because he was not authorized to provide details on the investigation. He said the meetings, including one later last summer, took place in several locations, including cafes and apartments.

Abrini had not resurfaced since the emergence of surveillance video placing him in the convoy with the attackers headed to Paris. He had ties to Abdelhamid Abbaoud, the ringleader of the Paris attacks who died in a police standoff on Nov. 18, and is a childhood friend of brothers Salah and Brahim Abdeslam, both suspects in the Paris attacks.

Friday was three weeks to the day that authorities arrested in another Brussels neighborhood Salah Abdeslam, who had been on the run for four months. Abdeslam is awaiting extradition to France.