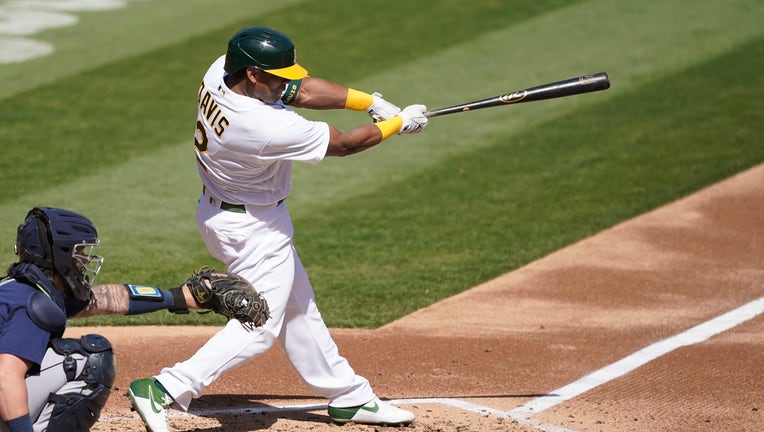 Khris Davis #2 of the Oakland Athletics bats against the Seattle Mariners in the bottom of the first inning at RingCentral Coliseum on September 27, 2020 in Oakland, California. (Photo by Thearon W. Henderson/Getty Images)

OAKLAND, Calif. - The Oakland Athletics and state and local public health officials are in discussions to launch a COVID-19 vaccination site at the Coliseum, a spokesperson for the team confirmed Monday.

According to Catherine Aker, a senior communications official with the team, the A's and Alameda County public health officials are planning on launching the drive-thru vaccination site at the Coliseum's parking lot.

The 49ers are offering Levi's Stadium as a COVID-19 mass vaccination site and are even pledging to buy the special freezers needed to store the vaccine. Other teams like the A's, are already in talks with the health department to use the Coliseum as a drive-thru site and the SJ Earthquakes have offered their facility as well.

The Oakland-Alameda County Coliseum Authority is expected to vote on establishing the vaccination site during its meeting Friday morning.

"These large, mass-vaccination sites, you'll start to see those coming up as early as this week," he said.

Fairgrounds in Sacramento and Fresno and a Disneyland Resort parking lot in Anaheim will also serve as mass vaccination sites.

According to the California Department of Public Health, 185,297 COVID-19 vaccines have been administered in the greater Bay Area region as of Monday.

President of the San Francisco 49ers Al Guido offered Levi's Stadium as a mass COVID-19 vaccination site. On Monday, he wrote a letter to a Santa Clara County supervisor to offer his state-of-the-art facility.

Meanwhile, The San Francisco 49ers have offered Levi's Stadium for a mass vaccination site in the South Bay.

49ers President Al Guido wrote a letter to Santa Clara County Supervisor Cindy Chavez saying that the team wants to do its part to help.

The letter goes on to say that the stadium has the technology to store the vaccines and has world-class security.

Guido added that he thinks use of the stadium would rapidly expand the number of people vaccinated in Santa Clara County.

There was no word yet on whether the county plans on taking them up on the offer.

KTVU and Associated Press contributed to this story.