Civil rights attorney John Burris announced a federal lawsuit against the City and County of San Francisco on Wednesday. The attorney alleges his client, a Black seventh grader, was racially profiled and unlawfully detained by police.

SAN FRANCISCO - Civil rights attorney John Burris announced a federal lawsuit against the City and County of San Francisco on Wednesday. The attorney alleges his client, a Black seventh grader, was racially profiled and unlawfully detained by police.

Burris, in a press release, said the 13-year-old student, Michael Coleman Jr., was waiting for his ride home outside the school.

The boy's tutor, Jeanne Wilton, arrived to give him a ride. The boy went to the car and placed his backpack inside.

The lawsuit alleges that's when a San Francisco police sergeant identified as Sgt. Parra suddenly came running and yelled, "get out of the car, put your hands behind your back."

Burris' claim says Parra would not let the boy go and insisted that the student matched the description of a suspect. The claim says the sergeant's suspect description including, "black pants, a black hoodie, and red shoes" was vague and that his client at less than 100 pounds, did not match that of the suspect.

Burris said Coleman Jr. had predominantly black shoes with red shoe strings, and pants with Mickey Mouse on them.

The claim alleges the sergeant grabbing the child was unjustified based on this description.

"Any reasonable police officer could have determined that this young boy did not fit the description of the suspect described as a male black, wearing black clothing and red shoes who was allegedly seen breaking into cars," Burris said in a news release.

The boy's attorney said he was detained for about 30 minutes, but that the police sergeant on the report said he was released after one minute. Burris said witnesses dispute this timetable. The boy's attorney also released surveillance-video camera of the incident that lasts more than 18 minutes. It is not clear from the video with no audio how long the boy was detained.

Burris said as a result of this incident, Coleman Jr. has missed days of school, is fearful of police and has suffered anxiety.

In a statement, Jen Kwart, a spokeswoman for the city attorney, said: "The City strives to foster trust between law enforcement and local communities. We will review the claim and respond appropriately."

Burris, along with the boy's parents, spoke at a news conference from the school, which includes fourth through 12th-grade students.

The boy's father said his son was traumatized. "He's been through so much, with his interaction with that cop that day. He's had nightmares. He'll lay between me and my wife," said Michael Coleman Sr.

"My son has been traumatized by the police officer's attack. As his mother, I am horrified that this happened to my son, who is loving, carefree, polite, and well-mannered He doesn't understand why this happened to him when he had done nothing wrong," the boy's mother Delores Coleman said in a press release. "Since the incident, my child is fearful about returning to school. He is embarrassed and wonders what his friends will think about him."

Speaking at the news conference, the mother added, "For us, we just want to make it a point, that this has to stop happening to our children. It really does."

The school issued a statement about the incident calling it "disturbing."

"Several staff members and our security guard witnessed the event and stepped in to support the student. This student was simply exiting the school for the day, and did nothing wrong," Melissa Myers, head of school wrote. The statement adds that a formal complaint on behalf of the school has been filed with San Francisco Police Department.

The San Francisco Police Officer's Association commented, saying, "It's no surprise that a trial attorney is looking to extract money from the city." They added, "San Francisco police officers focus on behavior and suspect descriptions when they make stops or detain people." They went on to say there are too many examples of teenagers committing very serious crimes from robberies to carjackings to shootings, so the fact that this happened to a teenager is not relevant to the crimes we are trying to solve."

SFPOA did not mention the alleged time discrepancy involving the police report. The city has one month to respond to this claim. 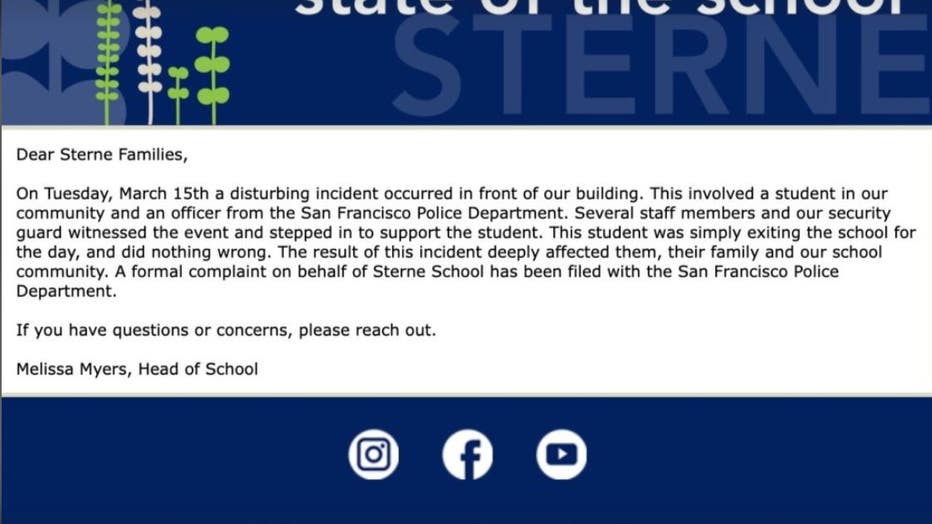