How to limit babies' exposure to toxic heavy metals

Some popular baby foods have higher levels of toxic heavy metals than others. Charlotte Brody, the national director of Healthy Babies Bright Futures, discusses how parents can limit their children's exposure.

WASHINGTON - Ongoing food monitoring by the U.S. Food and Drug Administration of toxic heavy metals like lead, arsenic, cadmium, and mercury revealed some concerning levels in the U.S. food supply — with certain baby foods having the most detectable levels of arsenic and lead.

Such heavy metals can negatively affect a baby’s brain development and are among the most common metals that get into food, according to the U.S. Centers for Disease Control and Prevention and the American Academy of Pediatrics (AAP).

These heavy metals are found naturally in the Earth's crust and are also released into the environment as pollution that gets into the water and soil used to grow food, according to the AAP. The toxins can also get into food from food manufacturing and packaging.

Exposure from all sources "should be minimized," the AAP states.

The FDA’s Total Diet Study Report, released on July 15, summarizes the findings after sampling over 3,200 food and beverage products between the fiscal years 2018 through 2020. It found that almost one-third (32%) of the foods tested contained toxic elements lead, arsenic, cadmium, and mercury.

Of all the foods tested, the highest levels of lead were found to be in baby food sweet potatoes and teething biscuits, in addition to sandwich cookies and white wine.

Roughly 51% of the baby food samples analyzed had detectable levels of "total arsenic" found in infant cereals and snacks like teething biscuits and puffed snacks.

Arsenic is a naturally occurring element. Inorganic forms of arsenic are dangerous and associated with more severe health effects than organic arsenic, although the toxicity of organic arsenic is also being actively studied, the FDA notes.

Six baby foods containing rice and/or juice "exceeded" the specific level of total arsenic and were being further analyzed to determine the levels of the dangerous inorganic arsenic.

Rice is often served to infants in the form of infant rice cereal, which is the most commonly consumed infant instant cereal in the U.S., according to the FDA.

Canned tuna had the highest concentrations of mercury, followed by baked cod and baked salmon, the report noted. 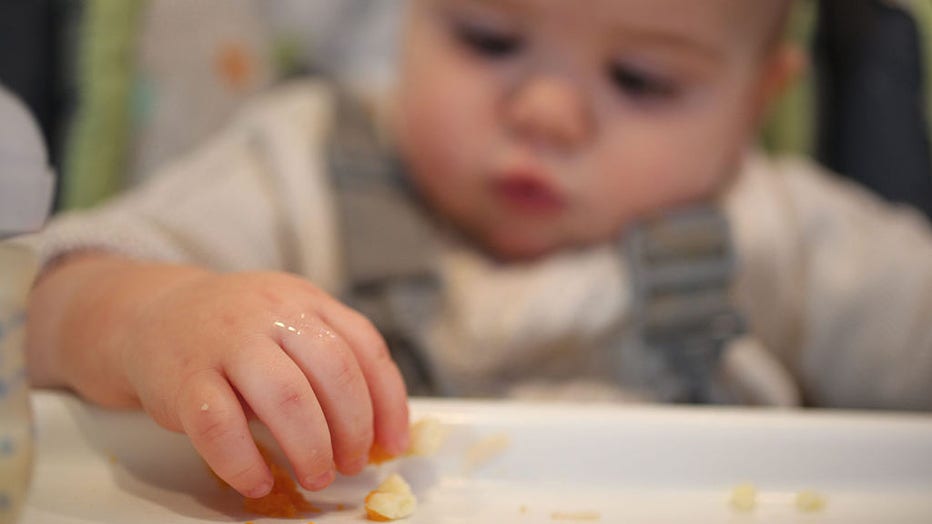 The FDA’s recent report is part of its ongoing Closer to Zero action plan to reduce exposure to arsenic, lead, cadmium, and mercury from foods eaten by babies and young children. This young age group was prioritized because "their smaller body sizes and metabolism make them more vulnerable to the harmful effects of these contaminants," the FDA says on its website.

The Closer to Zero action plan came after a 2019 study by Healthy Babies Bright Futures, an alliance of nonprofits, scientists, and donors aimed at reducing babies’ exposure to toxic chemicals. The study found that 95% of baby foods tested contained one or more toxic heavy metals, which led to the early 2021 Congressional report showing dangerous levels of heavy metals in several top baby food brands.

U.S. congressional investigators requested internal documents and test results from seven of the largest manufacturers of baby food in the U.S. and found that many top baby foods carried dangerous levels of inorganic arsenic, lead, cadmium and mercury.

The FDA’s Closer to Zero action plan was announced in April 2021 to drive down levels of heavy metals in food. Charlotte Brody, the national director of Healthy Babies Bright Futures, noted how there has been some progress, but more needs to be done.

"The few steps that have been taken, when the FDA has acted, the levels do drop," Brody said, noting how inorganic arsenic levels in infant rice cereal have dropped in recent years. "They need to be acting quicker and more strongly to keep those levels going down."

What are the standards for toxic heavy metals in baby foods?

"We recognize that Americans want zero toxic elements in the foods eaten by their babies and young children. In reality, because these elements occur in our air, water and soil, there are limits to how low these levels can be," the FDA says on its website.

Therefore, the FDA’s goal is to reduce the levels of arsenic, lead, cadmium and mercury in baby foods to "the greatest extent possible."

"We are also sensitive to the fact that requiring levels that are not currently feasible could result in significant reductions in the availability of nutritious, affordable foods that many families rely on for their children," the agency adds.

As a result, the Closer to Zero action plan is a multi-phase approach to achieving this goal over time. It is evaluating the scientific basis for "action levels" or standards for toxic metals in various baby foods, as well as other foods commonly eaten by young children. These proposals and finalized decisions are expected to happen through at least 2024.

Additionally, it has established bottled water standards: 5 ppb for lead, 10 ppb for arsenic, 5 ppb for cadmium,and 2 ppb for mercury.

The FDA said in a statement to FOX Television Stations that the agency’s action levels for toxic metals reflect levels at which it "may regard the food as adulterated."

"Our consideration of appropriate action levels may take into account various factors, including whether they may result in reductions in exposure to toxic elements and whether the action levels are achievable," the FDA said in the statement. "To the extent that you are comparing water and apple juice, it is important to realize that consumption of water is greater than apple juice. Additionally, it is important to realize that processors can take steps to reduce lead in bottled water more easily than apple juice."

The FDA’s Closer to Zero timeline aimed to have proposed lead draft action levels for categories of foods consumed by babies and young children by April 2022. While these standards were indeed proposed for apple juice (as well as chocolate and hard candy), no other lead action levels on baby foods have been proposed.

New York Attorney General Letitia James has led a coalition of several state attorneys general calling on the FDA to speed up the plan’s timeline. James called the delay on lead action levels for baby foods "both a public health concern and a matter of environmental justice," noting how low-income children and children of color are disproportionately impacted by lead.

In its own response, the FDA said it is "actively working" on draft action level guidance for lead in these foods.

"The FDA is committed to moving as quickly as possible," the agency told FOX Television Stations. "The Agency is on track to fulfill the commitments in the FDA’s ‘Closer to Zero’ plan and met our first-year goals. In April, we issued the proposed action levels for lead in juices. In addition, we are actively working on guidance for an action level for arsenic in apple juice and draft action level guidance for lead in foods marketed for infants and young children."

Toxic chemicals called PFAS found in half of US cosmetics tested

Researchers at the University of Notre Dame tested more than 230 commonly-used cosmetics from top brands.

‘No requirement to test the finished product’

In issuing its guidance for standards of lead in juice (10 ppb for apple juice, 20 ppb for other fruit and vegetable juices), the FDA noted that even low lead exposure can harm children’s health and development — specifically the brain and nervous system.

But the agency also said it’s committed to setting standards to the "extent feasible" by the juice industry.

"Though not binding, these action levels are intended to encourage manufacturers to maintain lead levels in juices below the action levels, thus reducing risks associated with dietary lead exposures," the FDA states on its website.

For Brody and other advocates, concern continues to grow for other baby food categories awaiting agency standards on lead and other toxic metals. And again, these standards are not binding but rather recommendations from the FDA for manufacturers.

"There’s no level, there’s no illegality to having an enormous amount of lead in sweet potatoes. That’s not one of the foods that are regulated at the present time," Brody noted.

She added: "There’s no requirement now that you actually test the finished product. There should be."

After the 2021 congressional report, the Baby Food Safety Act of 2021 was also introduced by Rep. Raja Krishnamoorthi (D-Il.), which would establish the maximum levels allowed of inorganic arsenic, mercury, lead, and cadmium in baby food and increase monitoring and enforcement of those levels.

The bill would require facilities that manufacture, process, pack or hold infant and toddler food to have certain controls and plans to ensure that their food complies with the toxic metal limits, including finished product testing, and make results from these tests publicly available.

In addition, the bill would expand the FDA's authority to require a recall of adulterated or misbranded food to include infant and toddler food that exceeds limits on toxic elements, among other changes.

The Baby Food Safety Act was introduced in the House in March 2021 but has stalled.

How to limit heavy metals in baby foods 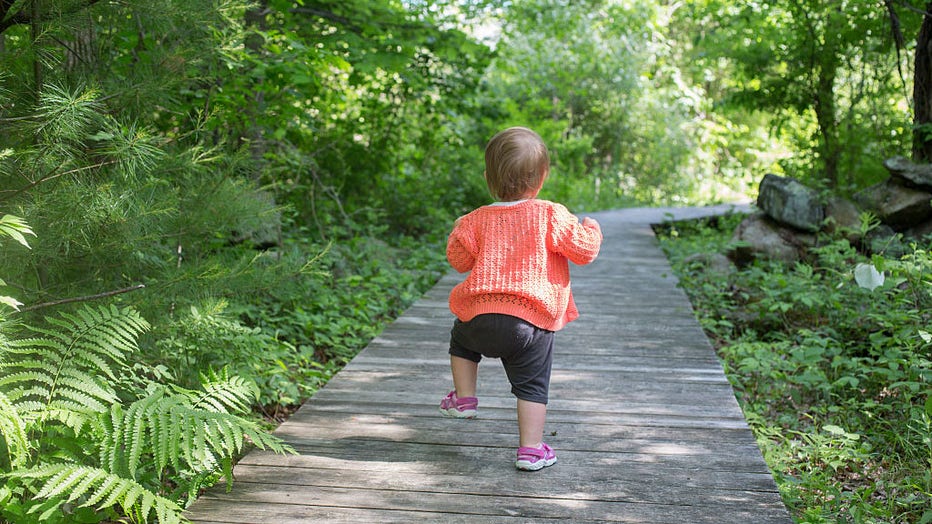 FILE IMAGE - A toddler walks along a path in nature. (Photo by Lisa Wiltse/Corbis via Getty Images)

Some popular baby foods have higher levels of toxic heavy metals than others, like rice-based snacks, juice, and sweet potatoes.

Rice is a leading source of arsenic exposure for young children, the Healthy Babies Bright Futures guidance states. Instead, parents can serve other grains like oats, wheat, and barley to help cut their family’s exposure.

Cooking rice in extra water that is poured off before eating can cut down arsenic levels by as much as 60%, according to FDA studies. Basmati rice grown in California, India and Pakistan has been found to have the lowest levels of arsenic, and white rice has less arsenic than brown rice, Healthy Babies Bright Futures guidance states.

"There are some foods that just have less heavy metals than others, and relying more on those foods is a better option," Brody said, noting how Healthy Babies Bright Futures offers shopping guides on safe products for parents online.

Infant rice cereal is the No. 1 source of arsenic in infant diets, Healthy Babies Bright Futures says in its guidance. Parents are encouraged to choose other cereals like oatmeal and multi-grain.

Instead of teething biscuits and rice rusks, parents can opt for items like frozen bananas, peeled and chilled cucumbers, a clean, cold wet washcloth, or a spoon, while always monitoring for choking.

"Some grains, some fruits, and vegetables pull up more heavy metals than others. So a banana is a better choice of a teething snack, especially if it’s frozen, than a teething biscuit," Brody said. "I would say a variety matters... mix it up, and be especially careful about the most contaminated foods."

"We also actually need the government to take care of this problem for us," she continued. "Closer to Zero is a very promising program. It needs to live up to its promise and make this one less thing that parents need to worry about."