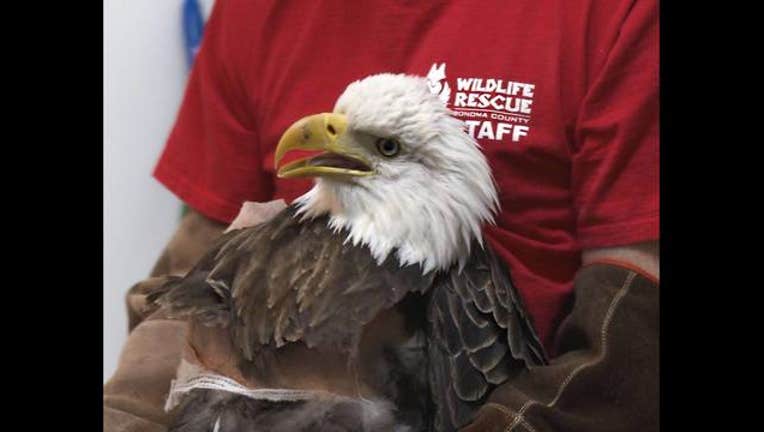 A Bald Eagle that was shot with a pellet gun and rescued last week in Petaluma was euthanized Friday morning, Sonoma County Wildlife Rescue said.

The male eagle was found with a fractured wing Jan. 31 near Corona Road in Petaluma. Two members of Sonoma County Wildlife Rescue captured the majestic adult bird and it was taken to the veterinary hospital at University of California at Davis for surgery Thursday.

An X-ray showed the eagle's ulna was fractured into several pieces in the shooting, and the injuries occurred in the immediate area where the eagle was found, according to Sonoma County Wildlife Rescue.

The location of the fracture also carried a high risk of restricting the eagle's full use of an elbow, which is critical for the eagle's ability to fly, officials with the wildlife rescue said.

The eagle's initial response to medical care was promising. Sonoma County Wildlife Rescue offered a reward for information that would help identify the person who shot the eagle and began accepting donations to pay for the thousands of dollars in treatment and recovery for the eagle.

But it also was determined the eagle had elevated lead levels that possibly could have an adverse impact on its heart. The UC Davis exotics and cardiology departments determined the eagle's heart was severely and fundamentally compromised, and in the absence of a treatment that would reverse the damage, the eagle was euthanized this morning, Sonoma County Wildlife Rescue said on its Facebook page.

The type of cardiac change the eagle suffered is associated with lead toxicity caused by chronic lead exposure, and there will be post mortem testing, Sonoma County Wildlife Rescue officials said.

Lead exposure usually occurs when raptors consume rodents or other animals with lead shot in them. For this reason, lead shot has been illegal in California for the past few years, but all too much remains unused, according to the wildlife rescue said.

Donations to Sonoma County Wildlife Rescue, however, were greater than the expenses for the eagle's care, and the wildlife rescue said it will return any donation if requested.

"Our default plan would be to put all additional donations specifically toward caring for other local raptors who will come to our facility for care this season," the rescue group said.