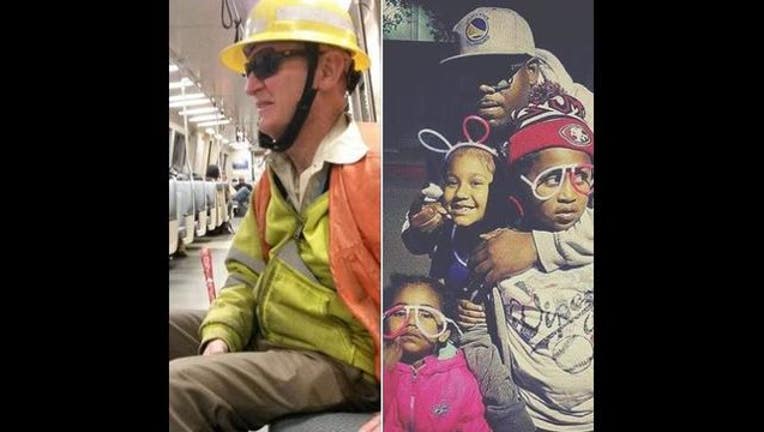 "This is the story of Byron on the left. And Dre on the right. They are what you might call “BART” friends. (For those who don’t know BART is the subway in the Bay Area). Byron is visually impaired. And every day Dre helps him find a seat.

Hers's what Dre wrote to me:

Byron is truly an amazing inspiration....We carry a conversation every morning. He gets up at 3 a.m. and walks three miles and gets on BART from Oakland to Frisco to his construction job.

He’s a real intelligent guy. As he feels his way on the train, I always direct him to the open seat near me we talk about sports, family, work and life itself.

A week ago he asked my age and birthday. So I told him and he replied "your young". Then this morning he got on the train and sat down and said, "Good morning Dre happy birthday" and gave me a Starbucks card.

I got so much respect for this guy because he has no excuses. Thanks Byron you inspire me to go harder my good friend. God bless!
- Dre Heph'

Stories like this always touch me. In a way their story is kind of old fashioned. It's what we used to do more of before iPhones and social media. Two people talking. Two people just being human. It’s refreshing."