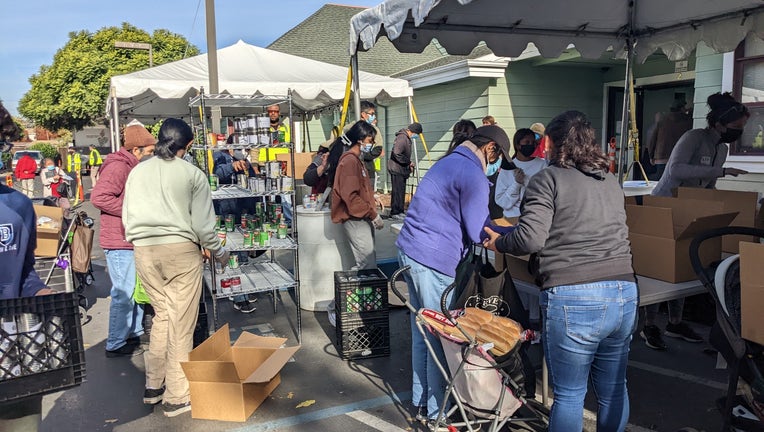 SAN JOSE, Calif. - Sacred Heart Community Service in San Jose kicked off its annual holiday food distribution program on Monday, as the non-profit made an urgent plea for donations.

Long lines winded around tables at Sacred Heart, as families and individuals waited to receive a holiday food box. The charity said it planned to give away 7,200 boxes this season. Each kit contained roughly 50 pounds of food, worth about $100 of groceries, including vegetables, fruit bread and a turkey, chicken or ham. 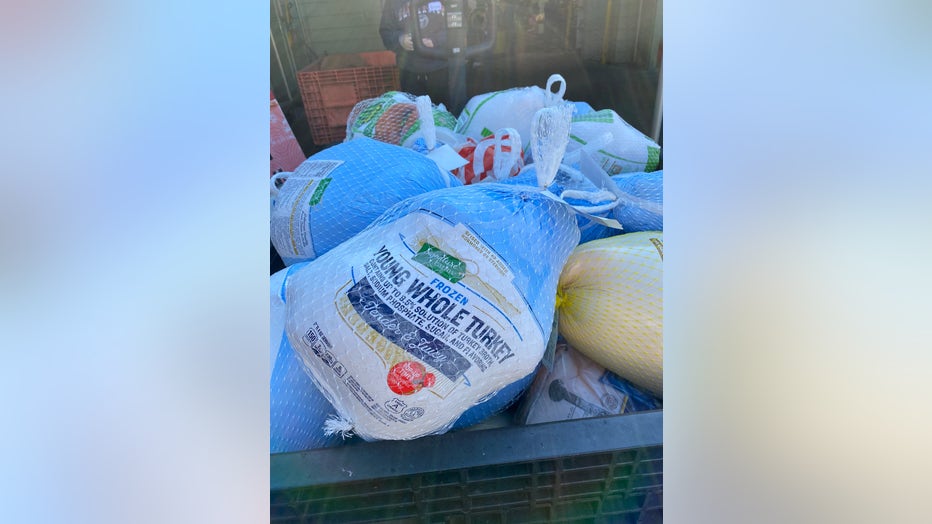 Sacred Heart said it sought to continue its mission of giving, especially with families struggling in the face of inflation and the high cost of food and other expenses.

"With the rising cost of groceries a holiday food box can help families save money which can be used for other necessities such as fuel and housing," Sacred Hearts said, adding, "Presently Sacred Heart is in dire need of turkeys, toys, and volunteers to make this year's holiday program successful."

In the South Bay and around the Bay Area, many non-profit charities said the challenging financial climate was making it difficult to serve their communities.

San Jose-based Second Harvest of Silicon Valley said that not only was it was finding increased need from the community, but financial donations have taken a hit, all while operating costs have surged.

Already hit hard by the pandemic, now with inflation it's been a one-two punch.

"We are dealing with the same issues our clients are – the high cost of everything is making it even more difficult to ensure that everyone has enough nutritious food to eat," said Leslie Bacho, CEO of Second Harvest of Silicon Valley. "Because we have been providing almost double the amount of food since the pandemic started, last year our expenses were twice what they were pre-pandemic. Now with inflation, our budget is even more challenged."

The group said it planned to combat the deficiency by launching its largest fundraising campaign yet, with the goal of raising $35 million by the end of the calendar year.

Food Bank of Contra Costa and Solano also reported a drop in donations, saying it’s seen a decline of 20%.

The Alameda County Community Food Bank (ACCFB) also said it's seeing rise in the number of people needing its services.

"Right now, one in four county residents are experiencing food insecurity," said ACCFB spokesman Michael Altfest, who noted that the lines at distribution centers were getting longer.

"A big driver of that is inflation," Altfest said. "The cost of what we're purchasing this year for our holiday food giveaway was 50 percent more than it was last year," he added.

The San Francisco-Marin Food Bank said it was currently serving some 56,000 households. That's up 12% compared with last fall.

"And just as more families turn to us, our food prices go up," the food banks senior communications manager Keely Hopkins told KTVU. "This year’s holiday distribution will cost us 35% more than last year due to rising food prices."

Hopkins noted that it also faced an unexpected $56,000 in cost of turkeys, which were usually donated.

In San Francisco, GLIDE Foundation was planning for its annual Thanksgiving meal on Thursday, as it prepared to serve 2,100 hot holiday dishes.

"This is the same number that we served last year. Inflation has driven up costs but we are always here to support those who need it most!" said Emma Tozer, media relations manager at GLIDE.

The long-standing San Francisco institution, which has been feeding the underserved for more than 50 years, said in addition to its holiday meal, it continued to provide three hot meals every day as part of its Daily Free Meals program. Last year alone, the group served some 530,000 meals to those in the community.

Also in San Francisco, officials with St. Anthony’s said that with food prices hitting increased levels not seen in more than 40 years, the charity hoped its donation programs like the Virtual Curbside Donation Drive would bring in a surge of donations in both and clothing to help offset the drop it’s seen.

The group said that it did receive a much-needed boost toward its goal from a longtime donor who dropped off more than 700 turkeys to its site on Sunday.

The windfall donation came from the organizer of the SF Turkey Drive, Pierre Smith, St. Anthony's officials said. Smith launched the initiative ten years ago out of his home in the city’s Merced Heights neighborhood and has been an integral component in St. Anthony's holiday drives.

"We are so grateful to our donors like Pierre," said St. Anthony CEO Nils Behnke. "Their generosity and kindness fuel our mission to help our community’s families, seniors, and individuals to not only find relief from hunger but also to feel hope and joy during the holidays."

The non-profit planned to serve more than 2,600 meals on Thanksgiving.