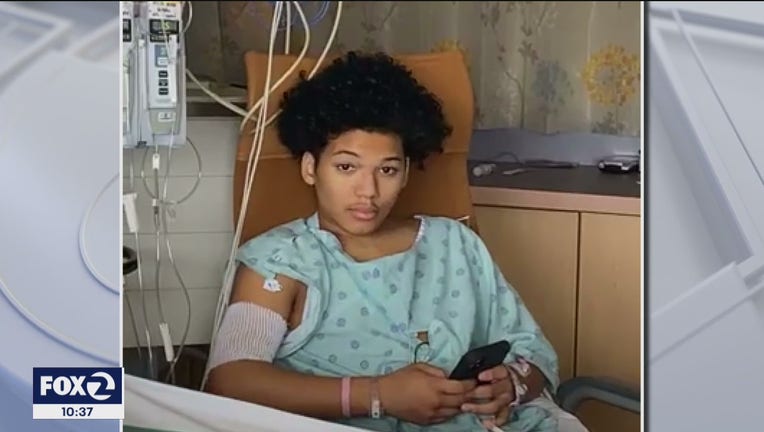 Lamont Jones III, a 15-year-old athlete who was a seemingly healthy, strong and vibrant boy only months ago, died on June 3, 2021. The teen's parents urged other families to get routine heart check-up for their children.

SUISUN CITY, Calif. - A Bay Area family is mourning the death of a 15-year-old athlete who was a seemingly healthy, strong and vibrant boy only months ago.

Lamont Jones III died last Thursday after being diagnosed with a heart condition known as dilated cardiomyopathy back in April.

"It saddens me to say on June 3, 2021 our son Lamont gained his wings," his mother Trielle Robinson shared in a message on GoFundMe.

As KTVU reported last month, it all began when Jones III started vomiting and experiencing COVID-like symptoms. As his condition worsened, on April 21 his family rushed the teen to the emergency room. Tests later revealed that there was fluid in the teen's lungs.

"Once they did the chest X-ray they found his heart to be enlarged. And once his heart was enlarged they did a sonogram and come to find out it was only 10-15% pumping," Robinson explained to KTVU.

Jones III, affectionately known to his loved ones as Bubba, was admitted to Stanford Children’s Health hospital, where he underwent multiple surgeries and had two mechanical devices inserted to help his heart pump blood.

The family, who lives in Suisun City, went through treacherous weeks of ups and downs.

KTVU's Greg Liggins has the story.

When the teen’s fight ended last Thursday, his family expressed their heartache as they also had a warning and advice for parents. "Lamont was a complete healthy athlete with no diagnosis until it was too late. Please get your children’s heart checked," Robinson urged, adding, "Ask for an Echo Cardio Gram every once in a while. If your child is tired on a constant basis, Winded while working out, any type of heart burn, throwing up more than a day; get your child checked right away."

And teach them to say something if they don’t feel right, the mother advised. "Children have a tendency to compensate their illness until it’s too late," she said.

Amid their unimaginable loss, the teen’s parents also expressed gratitude for the life they had with their child, as they remembered him as a strong student, gifted baseball player, and loving son. "If you had the opportunity to know our son, you knew he was a good person with a smile that was infectious," his mourning mother said. "We thank God for blessing us with Lamont and being able to raise and know him for 15 years."