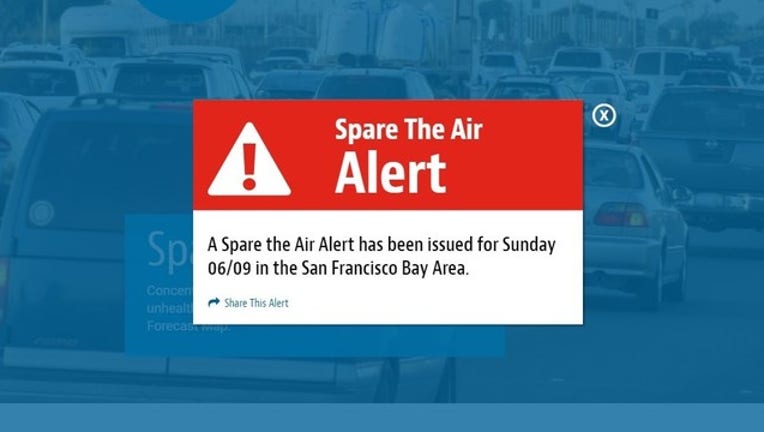 Residents should avoid driving on Sunday to help reduce the amount of pollution, said Jack Broadbent, executive officer of the Air District.

"Leaving our cars at home and walking, biking or taking transit, instead of driving alone, will help reduce unhealthy air pollution so we can all breathe easier," Broadbent said in a press release.

There is no free transit, and no wood burning ban in place for Sunday.

There were 13 Spare the Air alerts during the summer last year, according to the district.

Spare the Air Alerts are issued when ozone pollution is forecast to reach unhealthy levels.

Smoke and smog, also known as ozone pollution, is particularly harmful for young children, seniors and those with respiratory and heart conditions.

When a Spare the Air Alert is issued, outdoor exercise should be done only in the early morning hours when ozone concentrations are lower, according to the air district.

To find out when a Spare the Air Alert is in effect, residents can register for email AirAlerts at www.sparetheair.org, call 1(800) HELP-AIR, download the Spare the Air App or connect with Spare the Air on Facebook or Twitter.