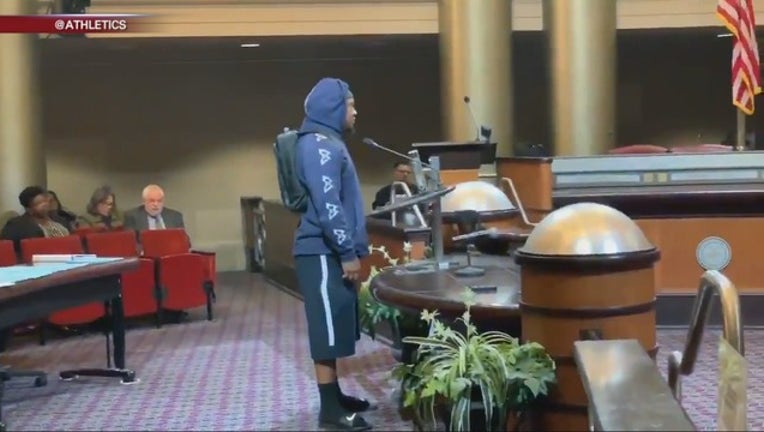 Raiders' Marshawn Lynch speaks to the Oakland planning commission on Dec. 19, 2019 to keep the A's in Oakland.

OAKLAND, Calif. (KTVU) - Oakland Raiders running back Marshawn Lynch wants to make sure the A’s stay in his hometown.

Lynch, dressed in blue sweats, addressed the council, making a short plea to commissioners to do what they can to forge a deal with the baseball team, which wants to build a new two-part stadium near the Port of Oakland and a housing/tech/concert hub at the Coliseum.

Lynch grew up in Oakland, attending Oakland Tech and playing for UC Berkeley before playing for the Seattle Seahawks and then for the Raiders, though he's been out since October, though, when the team placed him on injured reserve with a groin injury.

On Twitter, Lynch got a love from supporters, crediting him for standing up for his hometown.

The A’s  will be the last team standing in Oakland once the Warriors move to San Francisco and the Raiders leave for Las Vegas. The A's still need to come to an agreement with the Port of Oakland to buy or lease the property. The team’s goal is to have a stadium ready for the 2023 season.