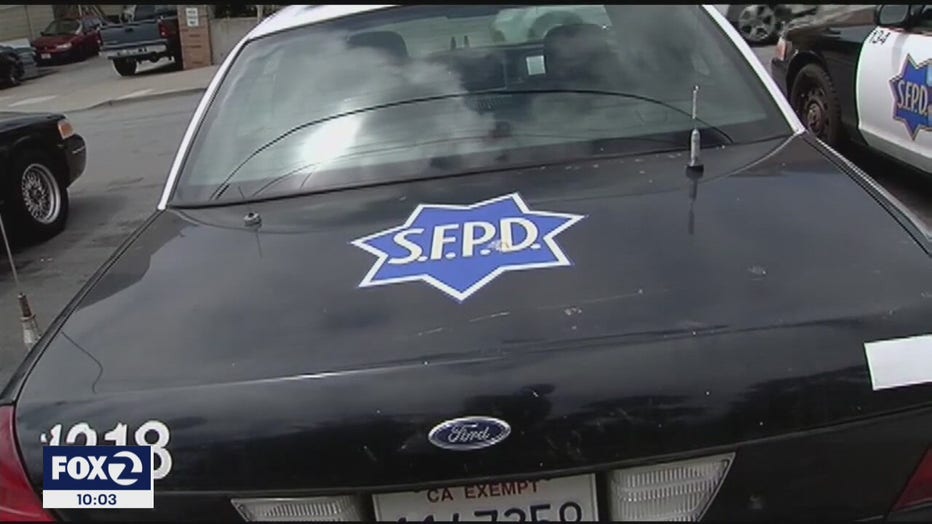 SAN FRANCISCO - A bicyclist describes a brazen assault in San Francisco: He said a man on a motorcycle pulled up alongside him, tried to kick him off his bike, and punched him.

"It feels horrible. I don’t want to go through my life just having to worry about people attacking me," said the bicyclist, who asked KTVU not to show his face and to identify him only as "J" because of safety concerns.

He said he had never seen the man before and that the attack was unprovoked.

The victim wants police to find the person responsible.

"J" said he's angry and still in pain from the confrontation.

He said he doesn't want the motorcyclist to harm anyone else.

"J" shared video with KTVU he said was taken by a witness.

"My nose is bleeding because he sucker punched me," said "J."

In the video, the bicyclist is the man in khaki pants.

He said he was attacked by the motorcyclist after a near crash in San Francisco's South of Market neighborhood.

"He tried to run me over. I'm just putting the bicycle in the way. You're not going until the police show up," "J" said as he described the confrontation which happened a week ago Tuesday shortly before 3 p.m.

The 36-year-old said the incident started when he was riding along Brannan Street at 2nd Street.

He said the motorcyclist nearly crashed into him while making a left turn.

"He chases me and then right about here, he starts kicking at my bicycle," said the bicyclist as he showed a KTVU where he first encountered the motorcyclist.

"J" said the motorcyclist followed him into a nearby alley.

"I said to him why did you kick me? He gets off the motorcycle and punches me in the face."

"I still wake up scared. Nose hurts. It's inflamed. I have to take a bunch of medication," "J" said his injuries include two black eyes, a broken noise and bruised ribs.

"I would just say shock. You don't expect to get kicked and punched while you're riding your bicycle to go do an errand," said "J."

On video, the bicyclist is seen using his bicycle to try to keep the motorcyclist from leaving the scene.

The motorcyclist throws the bicycle out of the way before taking off.

"We were not able to locate a suspect. At this stage, we're looking to identify and locate him, " said Officer Robert Rueca with San Francisco police.

"I posted pictures of the man," the bicyclist said he  posted on social media and other bicyclists said they've encountered a man who may be the same motorcyclist

One woman wrote that "he cut through a parking garage to pursue me...and that he seemed angry."

She declined an interview but did tell KTVU she did not file a police report.

"At this time, we're unable to confirm if this is the same suspect in other incidents that may have occurred," said Officer Rueca.

"Whatever this guy is going through, he shouldn't be inflicting this on other people. I think he needs serious help."

The bicyclist shared photos he took of the motorcyclist.

He was riding a white Harley Davidson.

He's described as 5 feet 8 inches tall and weighs about 200 pounds.

Police are asking anyone with information to contact them.