The U.S. Army's XVIII Airborne Corps posted a photo of the last soldier to leave Afghanistan, as U.S. troops sped to finish evacuating the country before the Aug. 31 deadline.

WASHINGTON - A total of 159 House members introduced a bill proposal that would posthumously award Congressional Gold Medals to the 13 U.S. service members killed in a suicide bombing at the Kabul airport on Aug 26, according to a Tuesday news release.

The bill, introduced by Congresswoman Lisa McClain, R-Mich., seeks to give Congress' most distinguished award to the 13 service members killed near the capital's airport.

Congressional Gold Medals have been awarded throughout history to recipients as Congress’ "highest expression of national appreciation for distinguished achievements and contributions," according to the U.S. House of Representatives History, Art & Archives website. 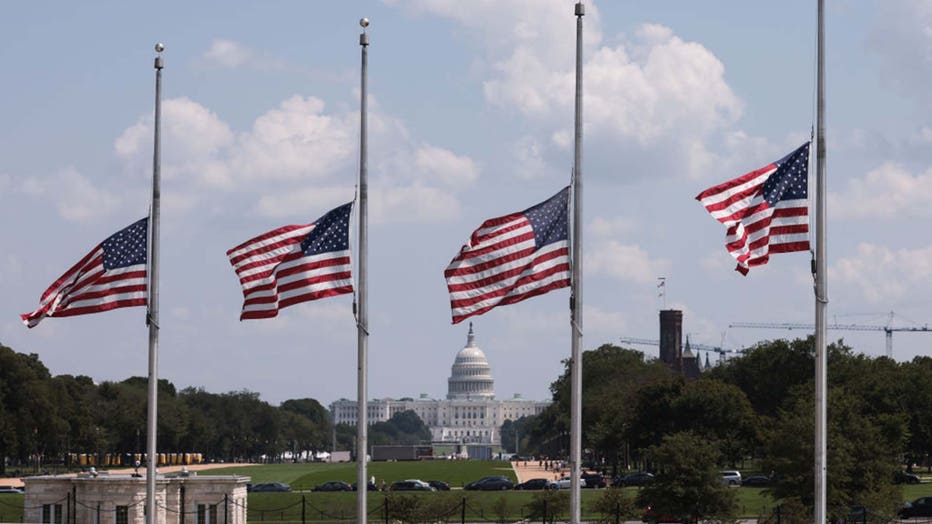 FILE - Flags encircling the Washington Monument fly at half staff a day after the death of U.S. service members in an attack in Kabul, Afghanistan, on Aug. 27, 2021 in Washington, DC.

"These heroic men and women are gone far too soon, and we must honor them for their bravery in helping U.S. citizens and Afghan allies safely evacuate Afghanistan," McClain said in a statement. "My heart aches for the families and loved ones of our service members. We will always remember their service and pay tribute to their sacrifice."

Citing Aug. 26 as the "deadliest single day of the war" for the U.S. in over a decade, the bill notes the fallen troops’ "extreme bravery and valor against armed enemy combatants" and declares that the group of 13 "dedicated their lives and their heroism deserves great honor."

Joining McClain on the bill are multiple members of Congress from both sides of the aisle, including Republican Reps. Elise Stefanik of New York, Jim Banks of Indiana, Jody Hice of Georgia, and Bill Huizinga of Michigan.

Democrat Reps. Stephanie Murphy of Florida, Benny Thompson of Mississippi and Andre Carson of Indiana joined their Republican colleagues in supporting the bill.

McClain's bill was introduced on Tuesday, five days after the deadly blasts in Kabul.

On Aug. 26, an Islamic State suicide attack at an airport gate killed at least 169 Afghans and 13 U.S. service members. The extremist group is far more radical than the Taliban, and the two groups have fought each other before. The Taliban said they will prevent Afghanistan from again being used as a base for terror attacks, a pledge that will likely be tested soon.