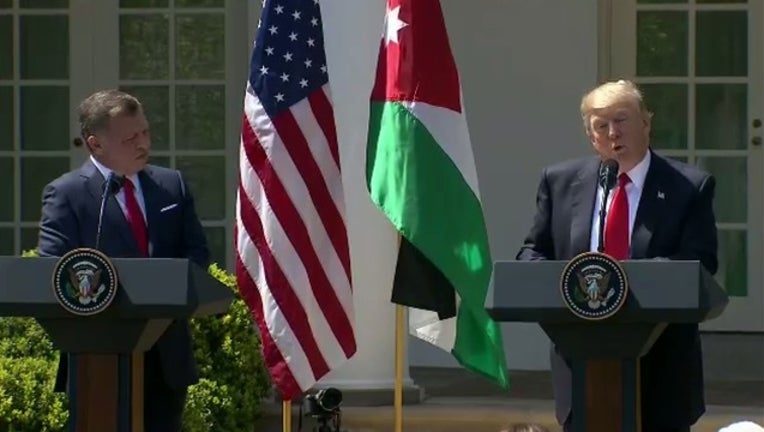 Jordanian King Abdullah speaking with President Trump from the Rose Garden at the White House on April 5, 2017.

WASHINGTON (AP) -- Decrying an "affront to humanity," President Donald Trump declared Wednesday that a chemical weapons attack in Syria "cannot be tolerated" but did not say what the U.S. might do in response. He blamed the attack squarely on Syrian President Bashar Assad.

Trump, speaking alongside Jordan's King Abdullah II in the Rose Garden, offered no details about what steps the U.S. might take in response, even as his U.N. ambassador, Nikki Haley, was promising a strong and perhaps even unilateral response. But Trump said the attack was "so horrific" and noted that it had killed "innocent people, small children and even beautiful little babies."

"These heinous actions by the Assad regime cannot be tolerated," Trump said.

He said the U.S. stood with its global allies "to condemn this horrific attack."

The United States and Russia were trading conflicting assertions Wednesday about who launched a chemical weapons attack in Syria that killed 72 people, as world leaders grasped for a response to the latest atrocity in Syria's intractable civil war.

As Trump stood by his charge that Assad's forces were responsible, Russia disagreed. The staunch Assad ally insisted that the chemicals were dispersed when Syrian warplanes bombed a facility where rebels were building chemical weapons.

"When the United Nations consistently fails in its duty to act collectively, there are times in the life of states that we are compelled to take our own action," Haley declared. She addressed an emergency meeting of the Security Council, which was weighing a resolution condemning chemical weapons use in Syria. Russia, which has veto power, is opposed.

Yet in Moscow, Russian Foreign Ministry spokeswoman Maria Zakharova focused her attention elsewhere: "It's necessary to demand that the rebels offer full access to study the area and collect necessary information."

Leaders and officials in other countries, including Britain and Israel, joined the U.S. in saying Assad's forces were responsible.

A U.S. official said an American review of radar and other assessments showed Syrian aircraft flying in the area at the time of the attack. Russian and coalition aircraft were not there at that time, said the official, who wasn't authorized to discuss intelligence publicly and requested anonymity. Washington hasn't yet concluded what type of chemical was used.

While calling the attack "reprehensible" and intolerable, Trump said Obama "did nothing" after Assad crossed the former U.S. leader's "red line" in 2013.

"These heinous actions by the Bashar al-Assad regime are a consequence of the past administration's weakness and irresolution," Trump said.

The political tone of Trump's statement took many U.S. officials by surprise. They noted that U.S. presidents have rarely attacked their predecessors so aggressively for events like chemical weapons attacks that Democrats and Republicans both abhor.

Several officials involved in internal administration discussions said Trump's National Security Council had been preparing a different statement, until the president's closest advisers took over the process. The officials weren't authorized to speak publicly on the matter and demanded anonymity.

At least 72 people died in the town of Khan Sheikhoun. The World Health Organization said victims seemed to show symptoms consistent with nerve agent exposure. Videos from the scene showed volunteer medics using firehoses to wash the chemicals from victims' bodies and lifeless children being piled in heaps.

A flurry of activity across the U.S. government signaled fresh urgency on the Syria crisis. Days earlier, White House and others officials suggested removing Assad from power was no longer a priority. They said the focus was defeating the Islamic State group.

Secretary of State Rex Tillerson planned to discuss the attack and the Syria crisis next week when he makes his first official trip to Moscow, the State Department said.

For Trump's critics, though, it wasn't enough. Sen. Bob Casey, D-Pa., criticized the White House by noting that Trump hadn't mentioned Russian President Vladimir Putin or Russia's role in the U.S. response. Tillerson accused both Russia and Iran, Syria's other top ally, of sharing moral responsibility in his own statement Tuesday.

"This was a moment the president could have spoken with moral authority and with the beginning of an outline of a strategy," Casey said. "And we don't see it."

Four years ago, after warning Assad that a chemical attack would cross a red line and trigger U.S. action, Obama failed to follow through. Rather than authorizing military action against Assad in response to a sarin gas attack that killed hundreds outside Damascus, Obama opted instead for a Russia-backed agreement to remove Syria's chemical weapons stockpiles.

That was seen internationally as a major blow to U.S. credibility and, for Obama's critics, a prime example of weak leadership. Syrian chemical weapons attacks continued after the deal.

Yet Trump was in agreement with Obama's ultimate decision. Among his tweets on the matter, he urged Obama in all caps, "DO NOT ATTACK SYRIA -- IF YOU DO MANY VERY BAD THINGS WILL HAPPEN."