Researchers say that a blood test that identifies the body’s immune response to tumor cells can be used to provide an early warning of breast cancer, potentially as early as five years before other signs or symptoms appear.

NOTTINGHAM - A simple blood test may be capable of predicting breast cancer risk in women several years before clinical signs begin to appear, according to a promising study out of Nottingham University’s School of Medicine.

Researchers say that a blood test that identifies the body’s immune response to tumor cells can be used to provide an early warning of breast cancer, potentially as early as five years before other signs or symptoms appear.

Cancer cells produce chemicals known as antigens, which trigger an immune response in the body. This immune response includes the production of auto-antibodies, which mistakenly target and react with a person’s own tissues or organs instead of fighting off infection or disease.

The research team was curious if, instead of waiting for a tumor or other clinical signs to appear, they could screen patients’ blood for the specific auto-antibodies that signal the presence of cancer.

“The results of our study show that breast cancer does induce auto-antibodies against specific tumor-associated antigens,” said Daniyah Alfattani, a researcher on the study, in an interview with the The Guardian. “We were able to detect cancer with reasonable accuracy by identifying these auto-antibodies in the blood. Once we have improved the accuracy of the test, then it opens the possibility of using a simple blood test to improve early detection of the disease.”

“We have found that these tumor-associated antigens are good indicators of cancer. However, we need to develop and further validate this test,” Alfattani added. 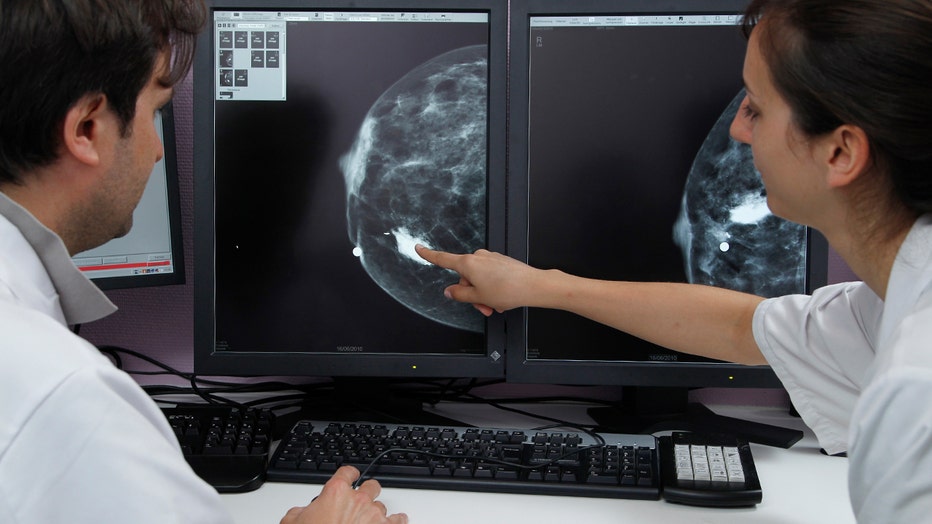 Doctors examine an x-ray of a breast tumor. (BSIP/UIG Via Getty Images)

Other cancer specialists are hesitant to claim that the new blood test technique can be touted as an advancement in the early detection of breast cancer — at least not yet. The preliminary findings may be promising, but plenty more research needs to be done to determine the wide-scale efficacy and efficiency of the test, they argue.

The Nottingham University team will continue to explore their findings on breast cancer identification with a larger group of participants in order to improve the accuracy of their findings, but they also hope to apply the technique to other forms of cancer, such as pancreatic, colorectal and liver cancers. Like breast cancer, these other cancers present with solid tumors, making them ideal candidates for new applications of the research team’s findings.

If the blood test does prove to be a reliable and sound method for early detection of cancer, the effects could be revolutionary, especially in low and middle-income countries where breast cancer screenings can be expensive and hard to access. The cost-effective blood test is easily performed and, unlike a mammogram, does not expose potential cancer patients to radiation.

The team’s research will be presented by Alfattani at the National Cancer Research Institute’s annual conference Sunday.