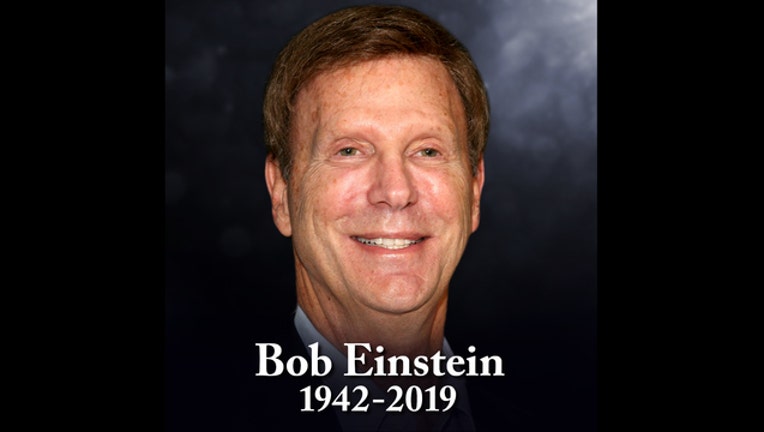 LOS ANGELES (AP) -- Bob Einstein, the veteran comedy writer and performer known for "The Smothers Brothers Comedy Hour," "Curb Your Enthusiasm" and his spoof daredevil character Super Dave Osborne, has died, according to his brother, filmmaker Albert Brooks. Einstein was 76.

Einstein was scheduled to be part of the 10th season of "Curb Your Enthusiasm," but his health barred him from filming, HBO said.

"It was an amazing, unforgettable experience knowing and working with him. There was no one like him, as he told us again and again," David said Wednesday. "We're all in a state of shock."

Einstein created and played Super Dave, a stuntman who was far more ambitious than he was agile and looked the part in an eye-catching white jumpsuit. Super Dave appeared on comedy-variety specials and series, most recently "Super Dave's Spike Tacular" in 2009.

"This character allows me to do anything I want, comedically, and get away with it," the comedian told The Associated Press in 1995, when he was starring in the series "Super Dave's Las Vegas Spectacular" series.

"I came up with the idea of a daredevil who's going to go upside down, in a metal car, at 90 mph, and it's never been done before," Einstein said then. "I get into this metal car, I'm strapped in. You pull back, and it's a roller coaster at Magic Mountain, with kids and nuns and everything else!

"I pass out while everybody else is having a wonderful time," he said.

Over time, Super Dave even made it into commercials for clothes and athletic shoes. Einstein said he never tired of his alter ego.

Einstein was born in 1942 in Los Angeles to actress Thelma Leeds and comedian and actor Harry Einstein, also known as Harry Parke. He gained radio fame as the character Nick Parkyakarkus and later played him on the big screen.

Besides Albert Brooks (his stage name), Bob Einstein's siblings include Clifford Einstein.
Bob Einstein won an Emmy for writing on the 1960s series "The Smothers Brothers Comedy Hour," on which he also played opposite Tom and Dick Smothers, and a second Emmy in 1976 for Dick Van Dyke's "Van Dyke and Company" variety series.

Comedian David Steinberg recalled on Twitter that he and Einstein started out together on the Smothers' show.

"What a mind! What a great friend. Brilliantly funny always," Steinberg posted.