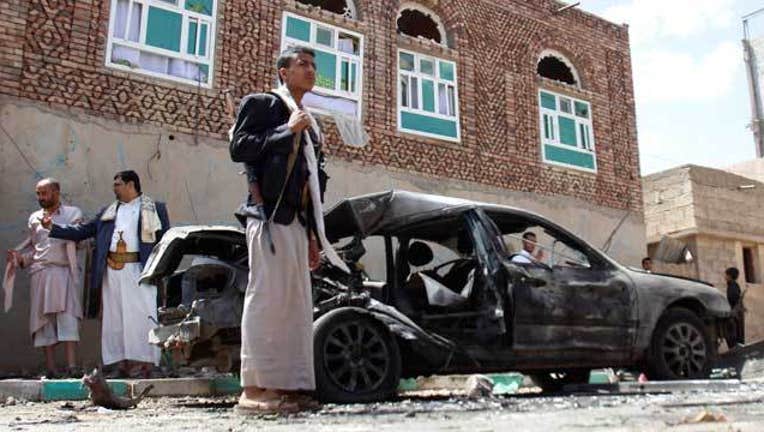 ADEN, Yemen (AP) — Suicide bombers attacked a pair of mosques Friday in the Yemeni capital, unleashing monstrous blasts that ripped through worshippers and killed 137 people in the deadliest assault yet targeting Shiite rebels who have taken over large parts of the rapidly fragmenting nation. At least 13 children were among the dead.

A purported affiliate of the Islamic State group claimed responsibility for the bombings, which also wounded 357 people — raising the alarming possibility the extremist group has expanded its presence to Yemen after already setting up a branch in Libya. Earlier this week, the group claimed responsibility for a bloody attack on Western tourists in Tunisia that authorities said was carried out by militants trained in Libya.

If the claim is true — and the U.S. expressed skepticism — Friday's attacks would be the first by the Islamic State group in Yemen, adding a frightening new layer to the country's turmoil.

Shiite rebels known as Houthis have taken over the capital, Sanaa, and nine of the country's 21 provinces over the past six months, raising fears of a civil war tinged with sectarianism. The government of the internationally backed president, Abed Rabbo Mansour Hadi, has fled to the southern port city of Aden.

Yemen is already home to the most powerful branch of the al-Qaida network, which has been battling the Houthis for months. On Friday, al-Qaida militants seized control of a southern provincial capital, al-Houta, in the group's most dramatic grab of territory in years. However, it denied carrying out the mosque bombings, citing instructions from the terror network's leader, Ayman al-Zawahri, not to strike mosques or markets.

Friday's blasts left scenes of bloody devastation in the Badr and al-Hashoosh mosques, located across town from each other in Sanaa. Both mosques are controlled by the Shiite Houthis, but they are also frequented by Sunni worshippers.

Images from the scene showed a number of children among the dead. In footage from the al-Hashoosh mosque, screaming volunteers were seen using bloodied blankets to carry away victims as a small child lay among the dead on the mosque floor.

"Blood was running like a river," said one survivor, Mohammed al-Ansi, who said he was thrown six feet by one of the blasts at the Hashoosh mosque, where the floor was strewn with body parts.

The mosques were targeted by two suicide bombers each during midday prayers, when large crowds turn out to attend weekly sermons. The state news agency SABA put the toll at 137 dead and 357 wounded. Among the dead were 13 children, according to the Interior Ministry. A prominent Shiite cleric, al-Murtada al-Mansouri, and two senior Houthi leaders were also killed, the rebel-owned Al-Masirah TV channel said.

It also reported that a fifth suicide bomb attack on another mosque was foiled in the northern city of Saada — a Houthi stronghold.

In the Badr mosque, the first bomber was caught by guards searching worshippers at the gate, where he managed to detonate his device. In the ensuing panic, a second bomber entered the mosque and blew himself up amid the crowd, according to the official news agency SABA.

"I fell on the ground and when I regained consciousness I found myself lying in a lake of blood," one survivor, Ahmed al-Gabri, told The Associated Press. Two worshippers next to him were killed in the explosions and another died when one of the mosque's glass chandeliers fell on him, al-Gabri said.

Another survivor, Sadek al-Harithi, said the explosions were like "an earthquake where I felt the ground split and swallow everyone."

If Friday's bombings were carried out by Islamic State group supporters, it could be intended as a dramatic signal to al-Qaida, the group's rival — effectively a challenge over turf. That raises the possibility of intra-jihadi fighting as the two compete for recruits by showing who can unleash the worst bloodshed.

In its claim of responsibility, an alleged Islamic State affiliate calling itself "Sanaa Province" warned of an "upcoming flood" of attacks targeting the Houthi rebels. "The soldiers of the Islamic State ... will not rest until we have uprooted" the Houthis, it said. The claim could not be independently confirmed and did not give concrete proof of IS involvement.

The statement was posted on the same web bulletin board where the Islamic State claimed responsibility for Wednesday's deadly attack on a museum in Tunisia.

In Washington, White House spokesman Josh Earnest said the U.S. had seen no indications of an operational link between the Islamic State group and Friday's attacks. He said the U.S. was investigating to see whether the IS branch in Yemen has the command-and-control structure in place to substantiate its claim of responsibility.

Earnest said it was plausible that IS was falsely claiming responsibility. "It does appear that these kinds of claims are often made for a perception that it benefits their propaganda efforts," Earnest said.

In recent months, there have been several online statements by individual Yemeni militants declaring allegiance to the Islamic State group. The IS leader, Abu Bakr al-Baghdadi, formally accepted their oaths and declared a "province" of IS in Yemen in November.

He and his deputies in Iraq have vowed to strike against the Houthis in Yemen. That has raised questions whether direct operational links have also arisen. For example, in Libya, where IS also declared official "provinces," fighters and officials are known to have been sent from the group's core to build the local branch.

It also has fomented a rivalry with al-Qaida, with IS leaders mocking the terror network for failing to stop Houthi advances in Yemen. Al-Qaida has denounced the IS declaration of a caliphate in areas of Iraq and Syria under its control and accuses the group of "driving a wedge" among jihadis.

In a further sign of the country's chaos, al-Qaida's branch of the country took control of the southern city of al-Houta on Friday, Yemeni security officials said. Al-Qaida militants driving pickup trucks and flying black flags swept through the city, which is the capital of Lahj province. They took over the main security barracks, the governor's office, and the intelligence headquarters, which houses prisons with al-Qaida detainees, the officials said.